The door-zone bike lane on Broadway is not very comfortable for most beginning riders.
(Photos: M.Andersen/BikePortland)

Among the many projects funded this month by Portland voters is one we first covered in early 2013: a network of protected bike lanes in downtown Portland.

The new local gas tax will send a projected $2.8 million to the project, joining with $6 million in federal funds the project scored in 2013 and $600,000 in other local funds.

“… Cyclists coming across the bridges from the east side into downtown Portland feel like the infrastructure is not as intuitive, is not as comfortable.”
— Gabe Graff, PBOT project manager

$8.4 million is enough to make serious improvements to several central city streets. The money might go even further if it could be combined with money from the city’s environmental services bureau that could let protective curbs double as grassy bioswales that prevent polluted rainwater from running into sewers and rivers. (City bike planning coordinator Roger Geller alluded to that possibility this month.)

“Our central city, particularly our downtown, is transit-rich, pedestrian friendly, pretty easy to access by car,” city project manager Gabe Graff said Tuesday. But “cyclists coming across the bridges from the east side into downtown Portland feel like the infrastructure is not as intuitive, is not as comfortable.”

Every north-south street between Broadway and 2nd Avenue has been discussed as a possible route for years.

Changes to Naito Boulevard, sidelined by the city council this month, seem like another possibility. Alternatively or in addition, it seems possible that one or two east-west streets might be improved. Alder, Taylor and Salmon have been discussed.

We wrote this month that in the four years since it opened a downtown protected bike lane network, citywide biking rates in Vancouver BC have doubled.

City: Outreach will start this summer with or without state funds So, what’s the holdup?

We reported a year ago that the city had hired a project manager, Rick Browning, as a long-term consultant. As the city waited for the state to sign off on federal funds, it assigned Browning to a series of smaller projects, such as the new buffered bike lane on 3rd Avenue.

Then in February we reported that Browning had been fired by the city for undisclosed reasons.

Now the work seems to be moving forward again with a new project manager, Gabe Graff. Graff, who previously managed the city’s Safe Routes to School program (which includes both infrastructure and education), brought us up to speed on the project Tuesday with help from city spokesman John Brady.

Brady said the city’s plan is in “the last stage of ODOT review,” which is “finalizing” an intergovernmental agreement over the project’s scope of work.

“An IGA that said ‘We need to build a sidewalk on this street from here to here’ would be more straightforward; it’s a more traditional approach,” Graff said. “If there was an added complication to this project, it’s that the premise was that there were not preconceived projects per se. … We’ve always felt that building a high-quality multimodal transportation facility in the central city requires us to have this process requiring many stakeholders.”

Graff said the negotiation between city and state is “administrative” and not shaped by any particular policy concerns such as additional auto congestion. He added that the state has already designated downtown Portland as a “multimodal area,” so it agrees in principle with the idea of slowing cars down somewhat if necessary.

Graff spoke as if it’s likely that the state and city will come to a sufficiently flexible agreement soon. But if the state hasn’t approved the federal money that would be necessary to hire a planning consultant by “this summer,” Graff said, the city will begin its public outreach with “internal staff.” 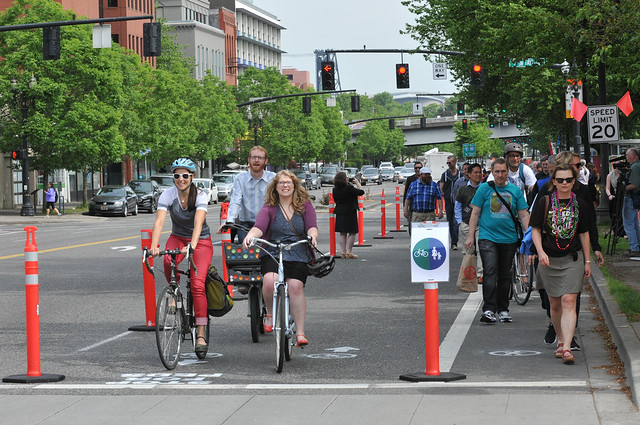 The next major step in the project, Brady said, is to convene a stakeholder committee to choose exactly which streets should be improved and in what order.

“The goal of the stakeholder process will be to organize the project into the following groups,” Brady said: “those we will fund with the [federal] grant, those we will fund with the $2.8 million in gas tax funds, those we’d hope to build in a five-year time frame but haven’t identified funding for, and those projects outside of the five-year time frame but that we’d like to pursue in the future.”

I asked Graff to describe the goals of the project as he saw it. He brought up another long-awaited bike project for the central city: a public bike sharing system.

“The project was conceived after we were contemplating having a bike-share system in the central city, and how could we make the central city more compatible for the types of riders we imagine using bike share: new cyclists, the interested but concerned, a broader cross-section of Portland,” Graff said.

Bike sharing, meanwhile, is currently on track to launch in mid-July, the city said last week. It said final station locations will be announced next week.