If Portland is on the cusp of a new open streets era (and I think it is), it will be up to us to make it great. And by “us” I mean all of us — from city staffers to grassroots activists and everyone in between.

That’s because the way Portland is doing this is different than other places (surprise, surprise). Our movement is being led by the community and the powers-that-be (the transportation bureau and City Hall) are merely facilitators.

That’s one of the big — and exciting — takeaways from our latest Wonk Night that happened on Wednesday at the Lancaster StreetLab.

With about 40 or so movers-and-shakers in the livable streets movement, we shared insights, traded ideas, and asked important questions about Portland’s open streets past, present, and future.

I’ve always had a sense that using streets as public spaces and for much more than moving automobiles around was in Portland’s DNA; but I had no idea our local open streets legacy was nearly 50 years old. At Wonk Night, southeast Portland resident Greg Raisman (he’s a bureau of transportation employee by day) told us about the Halprin project in southwest that includes a series of fountains and carfree plazas that were created in the 1970s.

Fast forward to more recent history and 2008 stands out as a watershed year: That’s when Portland transportation reform activist Elly Blue and a merry band of volunteers organized the International Towards Carfree Cities Conference, the City of Portland hosted its first Sunday Parkways, and Last Thursday on Alberta finally went carfree.

The cultural shift around streets has happened been dramatic in the past decade or so.

Terry Dublinski-Milton shared how he recalled living on West Burnside in 2003 and would watch police corral and harass Critical Mass riders outside his window. Today he rides Burnside on the fun-loving, monthly Thursday Night Ride and there’s never any friction. 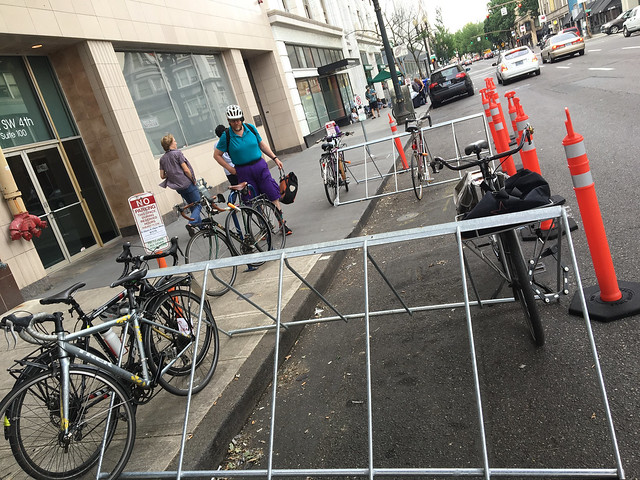 We used two parking spaces out front for bike parking! 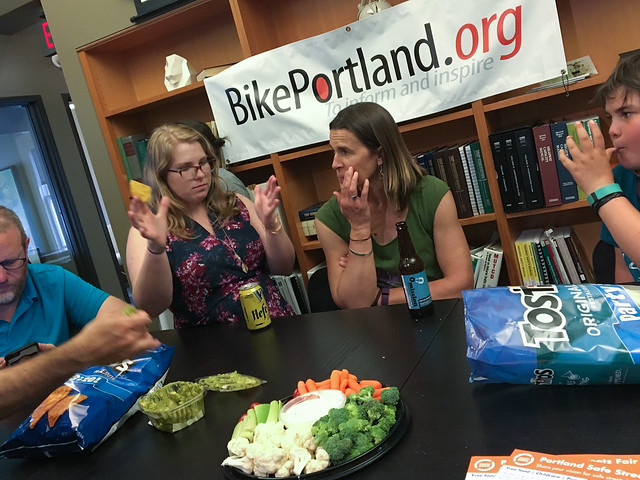 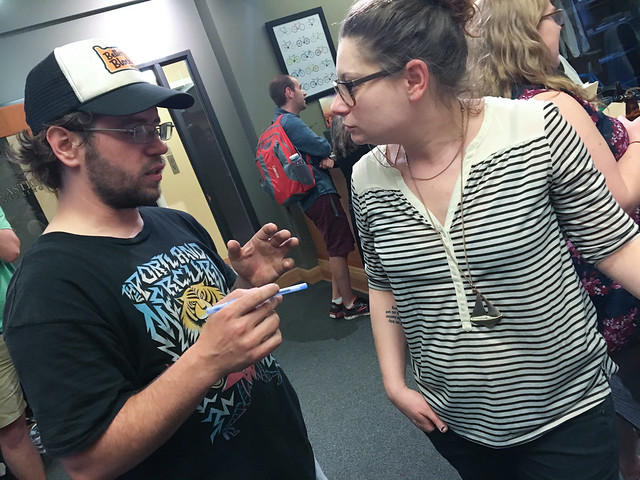 Ryan Hashagen of Better Block PDX and Inna Levin from Oregon Walks. Inna is putting on the “Cully Camina” walk in September. 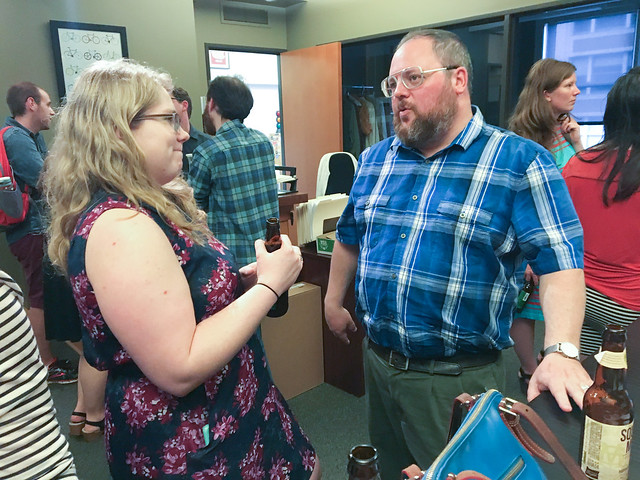 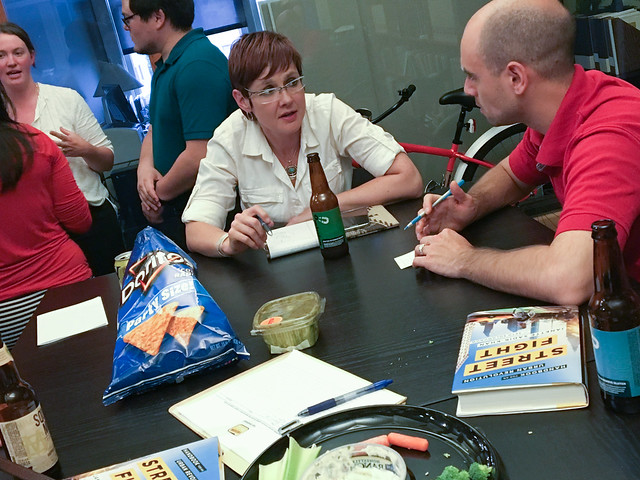 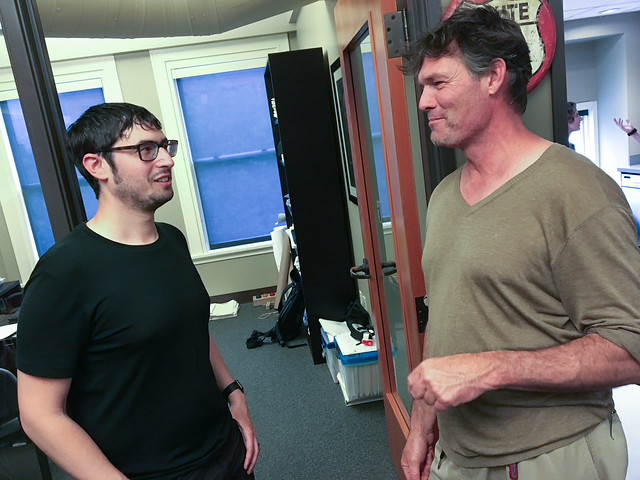 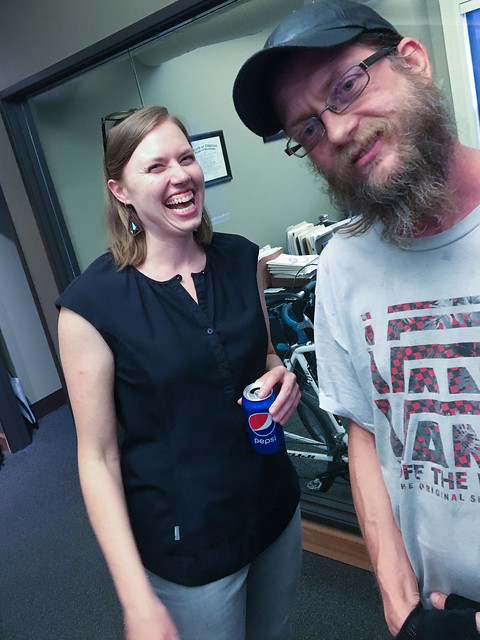 And the demand for sane, people-oriented streets isn’t just a Portland thing. Naomi Fast, a carfree Beaverton resident who commutes into Portland, encouraged us to take a more region-wide approach. A woman who works on Safe Routes to School programs in Tigard said people on the West Side are itching for events like Sunday Parkways and carfree street festivals.

If this movement is going to blossom in Portland and the spread across the region, we can’t just sit back and wait for it. We must organize, collaborate, and strategize. Basically, do what we’ve started to do, but do it better.

Speaking of which, we had several key leaders of Better Block PDX in the room. Gwen Shaw, Ryan Hashagen and Ben Chaney are three of the main organizers of the projects you’ve heard about like Better Naito and Better Broadway. They shared lessons learned from the Broadway project. Based on feedback from a local business improvement organization, they learned the most popular feature were the temporary crosswalks.

Raisman, the PBOT employee who’s an official liaison to Better Block, gave a lot of credit to Better Block and upstart bike activism group BikeLoud PDX. He said they’ve helped build a bridge between PBOT, the community, and other institutions.

Brian Davis, a traffic engineer and planner with Lancaster Engineering’s new StreetLab, said he can tell things are changing at PBOT. “I can see the needle moving in my conversations with them.” Davis said that PBOT staffers like Raisman and his fellow advocrat, bike coordinator Roger Geller, have telling the community to make more noise for a long time. “And we’ve been becoming louder thanks to BikeLoud and Better Block.”

“Oregon is one of the least taxed states in the country,” Raisman said. “We’re trying to cobble together as much as we can,” he continued. “And when money comes up major issues like homelessness, housing, and now lead, come up too. We have great neighborhoods and amazing people, that’s where our riches lie.”

Sarah Iannarone, fresh off her impressive mayoral campaign (she finished third with about 12 percent of the vote), was also at the event. She encourage the City to be more effective at how it leverages volunteer labor. “The thing that will keep us cutting edge is our community innovation. We need to orient public policy to empower the community.”

I asked Iannarone why she led her campaign with such a strong transportation reform platform. “I knew we couldn’t have a conversation about Portland’s future,” she said, “Without talking about our streets.”

After a rousing and inspiring discussion I asked everyone in the room to share their ideas for potential open streets projects. Here are some of the things that came up:

— Get cars off the “transit” mall
— Make a section of downtown carfree and base the plan on the Fareless Square boundary.
— A plaza at SE 26th and Clinton.
— Make the Park Blocks into some form of shared space where people are prioritized over cars.
— Create a world-class entertainment district instead of the “abysmal” situation in Old Town that exists today.
— Create temporary public plazas in work zones during construction projects (the streets are already closed so why not?)
— Stop giving away free parking.

We have momentum on our side, but there’s a lot of work to do. It all begins by bringing people together who are hungry for change and engaged and smart enough to make it happen. That’s what Wonk Night is all about.

If we embrace the opportunity to work with PBOT to make our streets better — instead of waiting around for them to do it for us — there’s no limit to what we can do together.

Thanks to everyone who showed up! Stay tuned to BikePortland, support groups and leaders who are transforming our streets, and let’s keep the momentum going.

And thanks for bringing the cones Ryan! 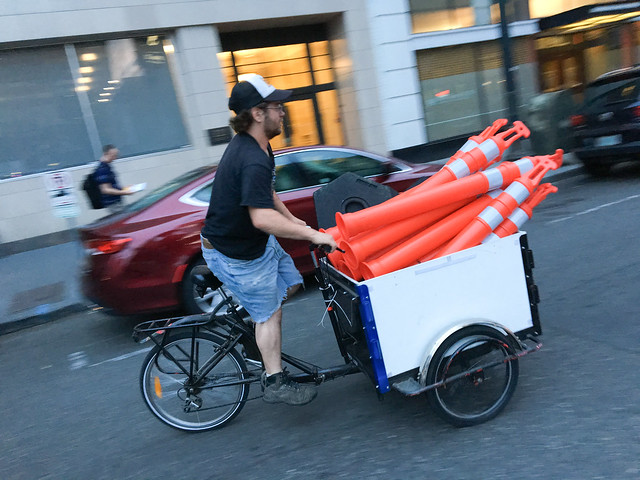