Aerial view of Couch curve and new road under construction.

The last thing we need on the infamous “Couch Curve” where it enters onto the Burnside Bridge is a new road that adds another layer of auto traffic into the mix. Thankfully that’s not going to happen. 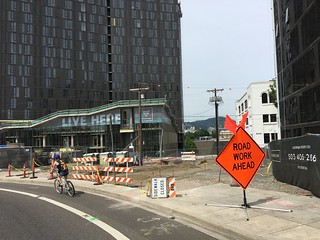 We recently noticed a new road being constructed from NE 3rd Avenue up to Couch. Its potential impacts worried us because it spills right onto Couch at the start of the S-curve where about 2,000 people bike by everyday on their way into downtown Portland. The potential for collisions would have been significant.

When we followed up with the city to learn more about the project we got some very interesting news:

The City of Portland has granted a request by real estate developers working on Burnside Bridgehead project to make the new NE Couch Court carfree.

According to Portland Bureau of Transportation Communications Director John Brady, the new street was designed for auto use but will be narrowed under the new plan. It will be reduced from 18 feet to 14 feet and will not be open to cars. It will be two-way for biking and walking only.


In addition, PBOT plans to install a raised bike lane on NE Couch. As many of you already know PBOT has had a heck of a time trying to prevent people from driving their cars into the bike lane in the curves. They’ve tried LED light reflectors and rumble bumps but both measures have failed.

Brady says the new solution will be a grade-separated bike lane that will be raised up three inches from the roadway. “This is to keep vehicles from straying into the lane,” Brady says, “And also to give drivers a visual cue and discourage them from turning [right] onto Couch Court.”

The City is smart to make a stand for cycling and create roads that do not encourage dangerous driving — or driving at all for that matter. There are three major projects in progress on the eastside of the Burnside Bridge and they include 330 new auto parking spaces combined — including one that will have a mechanical parking system that will house cars on the second and third floors. As growth continues in the central eastside, we must continue to grow the biking and walking infrastructure along with it.

We’ll share more details about the striping and design plans of the new street segment and the Couch bike lane as soon as they’re ready. Stay tuned.