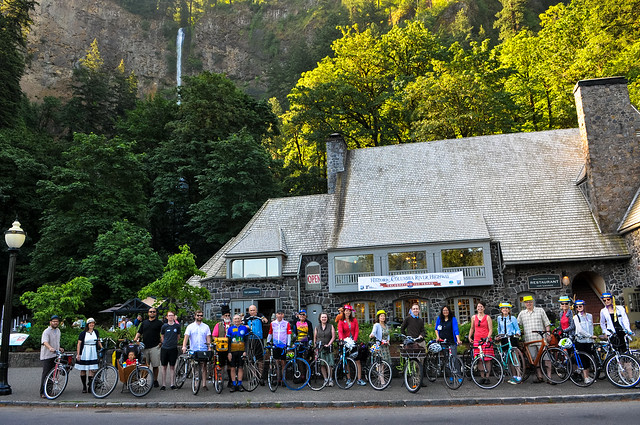 “While this highway was built for Model-Ts, its future is meant for cyclists, walkers, and hikers…”
— Barbara Roberts, former Oregon Governor

100 years ago today the State of Oregon dedicated the 73-mile Historic Columbia River Highway. It was a marvel of its time, the nation’s first Scenic Highway, and it was known simply as the “King of Roads.” Its 73-miles of curves and sweeping gorge views from Troutdale to The Dalles were an inspiration to engineers and explorers alike.

Then it was all but forgotten in the 1950s when Interstate 84 bullied its way through the gorge. The new interstate cut off sections of the old highway and it fell into disrepair. In 1987 the state legislature established the Historic Columbia River Highway Advisory Committee and work began in earnest to restore the highway to its former glory.

When it was rededicated today at a Centennial Celebration held at Multnomah Falls, there was one major difference this time around: Instead of automobiles marking the future, they now mark the past.

Concerns about congestion, traffic safety, and the preservation of the Gorge National Scenic Area have resulted in a new push for buses and bicycles — these are the vehicles that will define the Historic Highway’s next 100 years.

To make sure bicycles weren’t forgotten at this momentous historical occasion, about two dozen of us rode from Corbett to Multnomah Falls to join the festivities.

We rode to Vista House where we stopped to talk with volunteer docents dressed in period garb and then posed for a commemorative panorama photograph in front of Multnomah Falls Lodge. After the photo-op we stood and listened to the formal rededication ceremony that was held at the misty foot of the legendary waterfall. The event was emceed by none other than Sam Hill (an impersonator of course), the early 20th century businessman and leader of the Good Roads movement who cajoled and lobbied the State of Oregon to build the highway.

“Good roads are not just my passion,” Hill said with conviction, “They are my religion!” 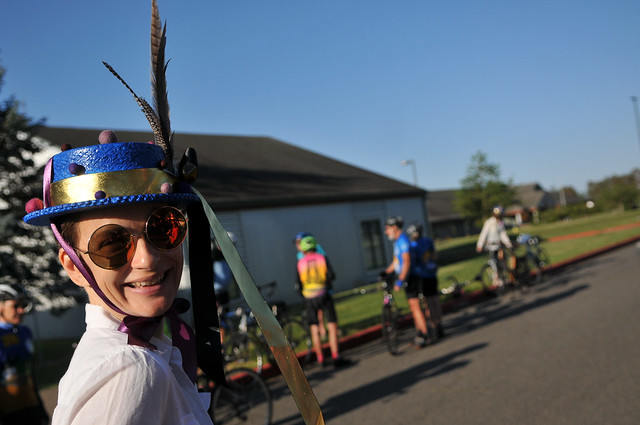 Isabel Daser, visiting Portland from France, was at the event as part of a Women on Wheels meetup. 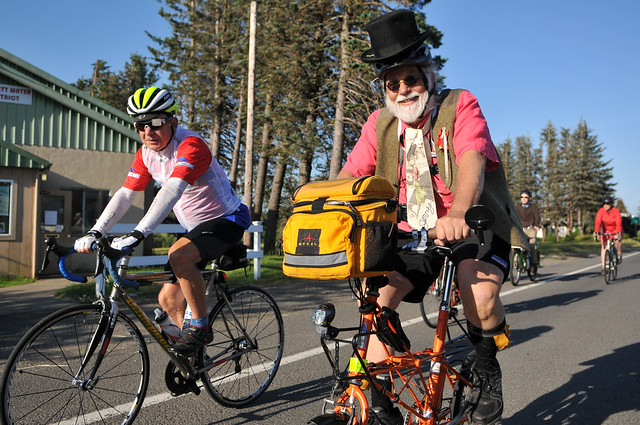 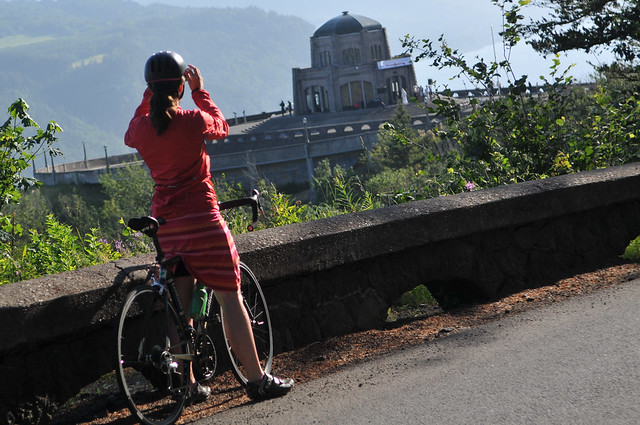 Kristin Dahl from Travel Oregon couldn’t resist a shot of Vista House — and neither could I! 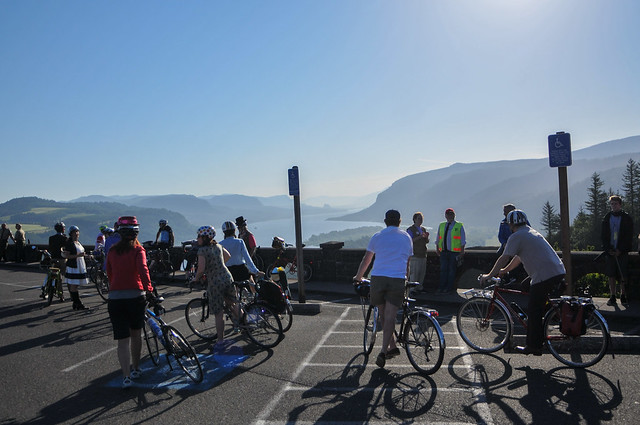 Not a bad day for it. 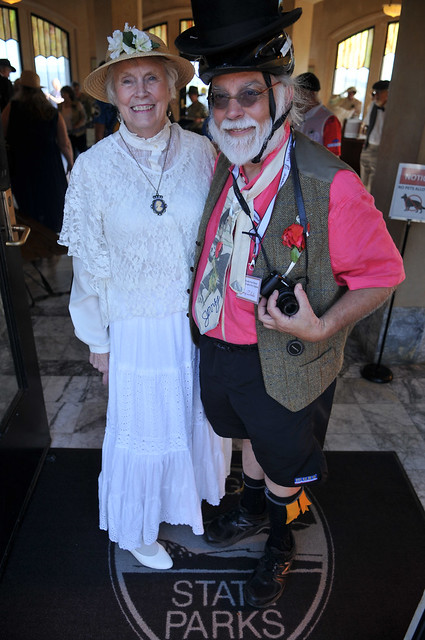 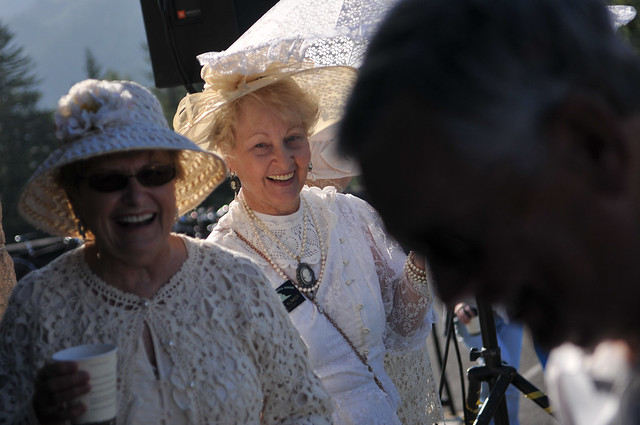 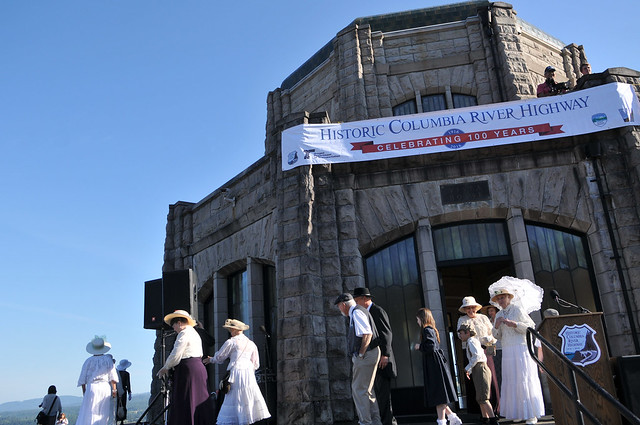 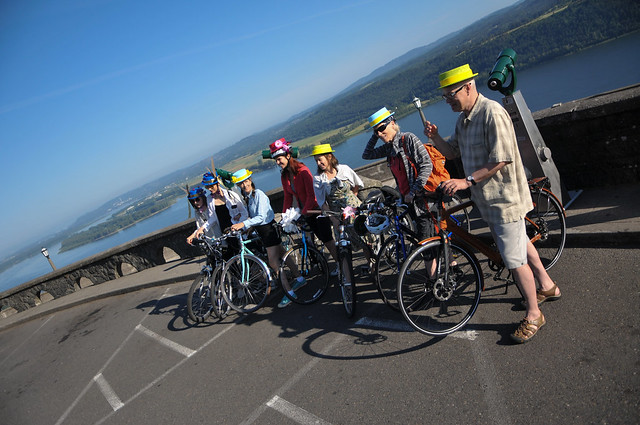 Portland author April Streeter organized a meetup of her Women on Wheels group. 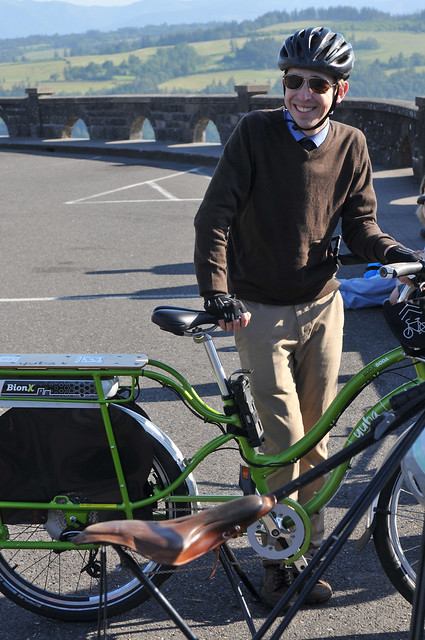 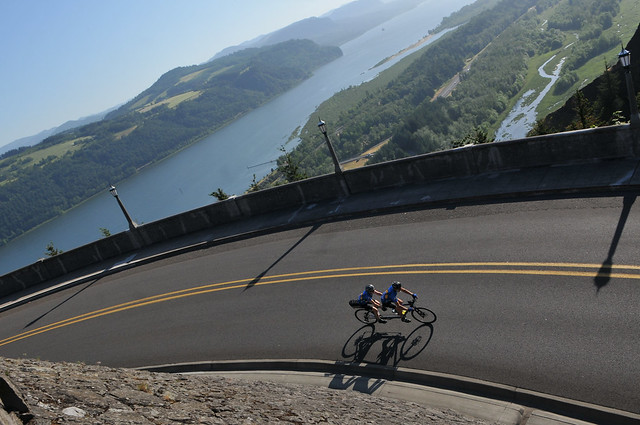 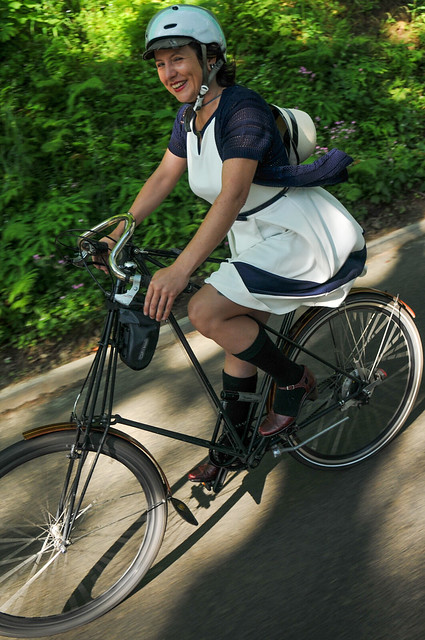 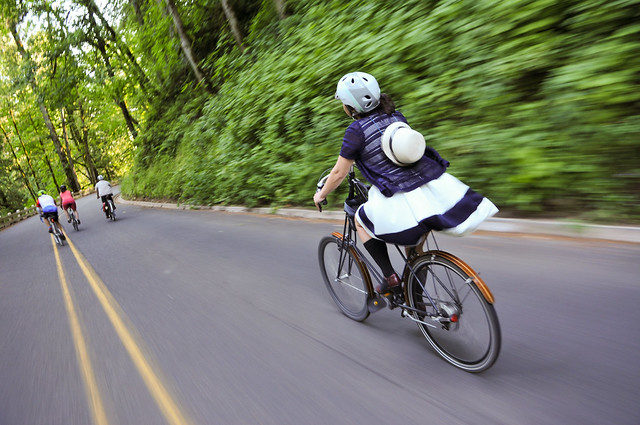 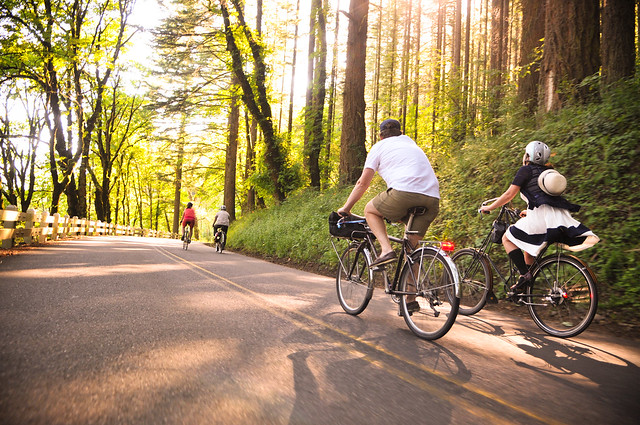 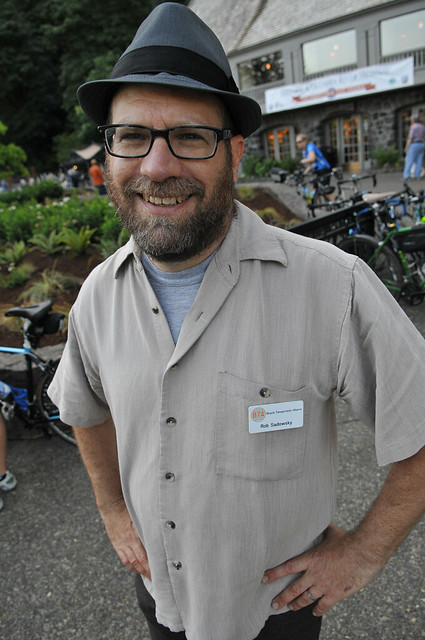 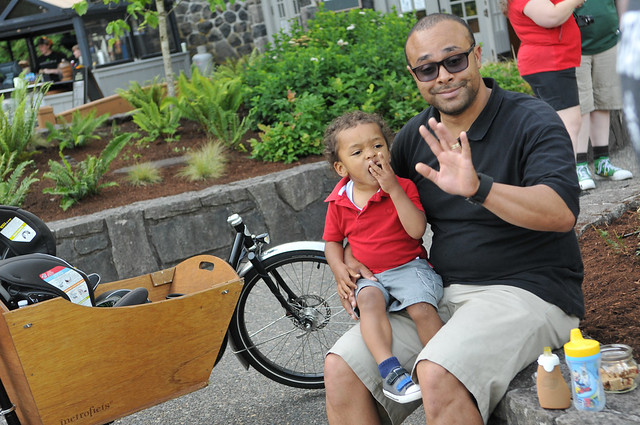 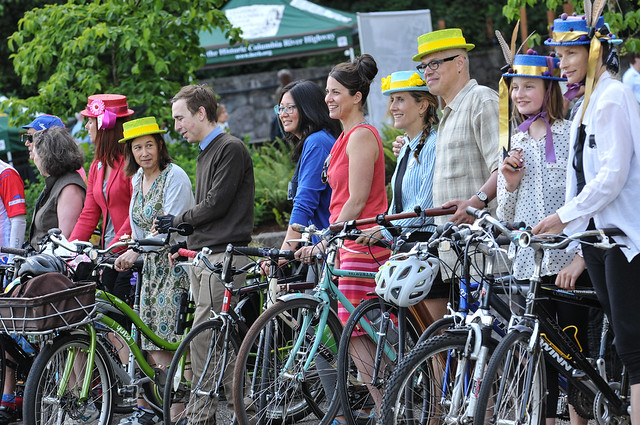 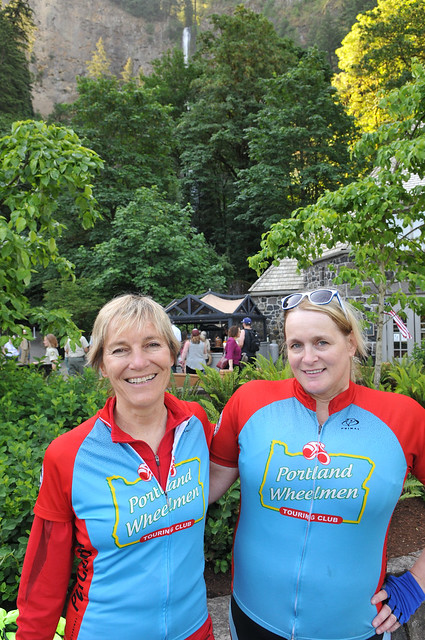 Ann Morrow and Kathleen Hellem, current and former presidents of the Portland Wheelmen Touring Club. The Wheelmen have donated several bike racks along the highway. 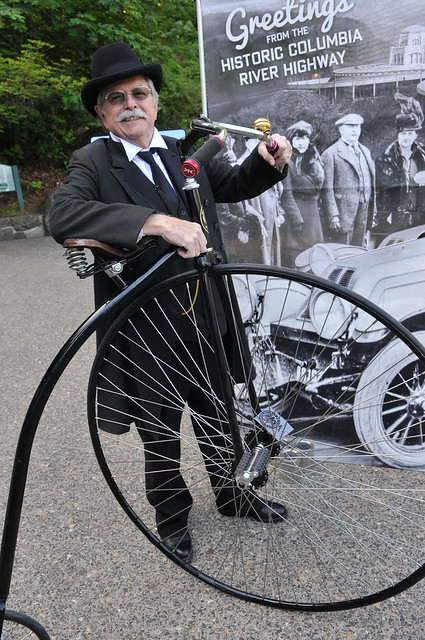 Sam Hill! On a penny-farthing! 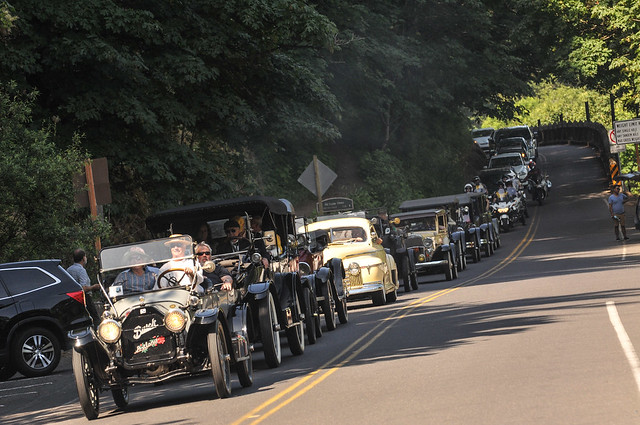 It wouldn’t be a nice day in the gorge without a traffic jam. In some ways it was fitting that the dignitaries rode in antique cars. With cycling and transit on the rise, cars are increasingly a thing of the past in the gorge. 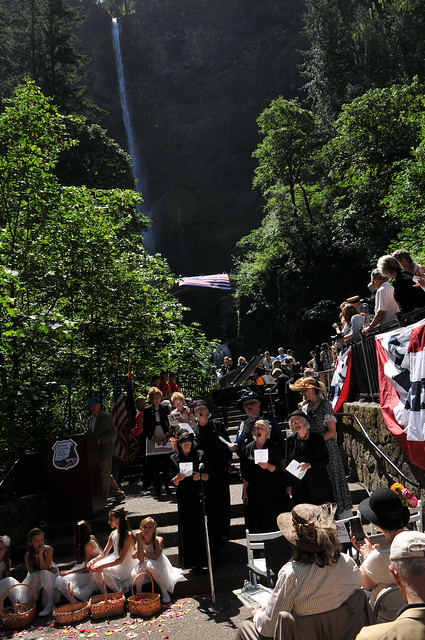 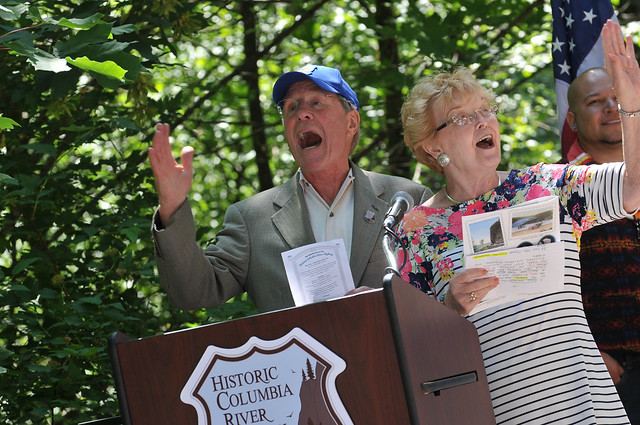 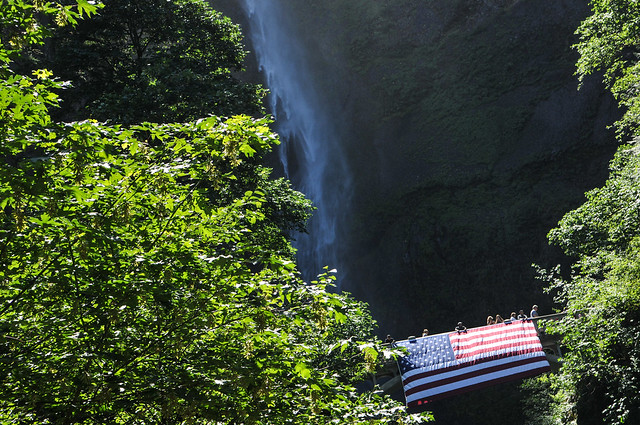 You know it’s a big event when they unfurl an American flag. 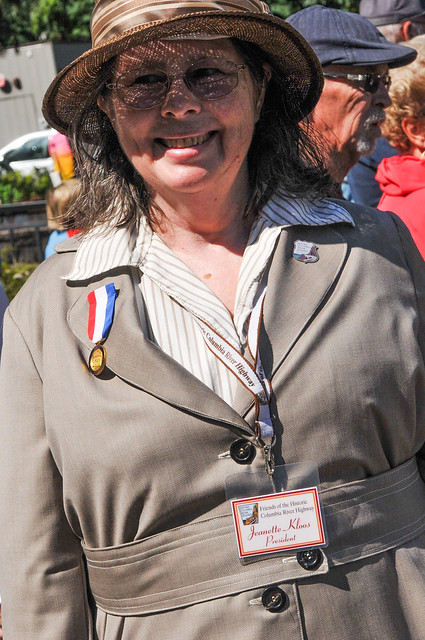 This is Jeannette Kloos, a former ODOT employee who’s been working to rebuild the Historic Highway for 30 years! She co-authored the seminal study on it in 1987. She’s now president of the Friends of the Historic Columbia River Highway, a group she founded in 2006. Jeannette’s dedication is the reason we’ve made so much progress on this project and the reason there’s so much momentum to complete it. She was the most important of all the VIPs today as far as I’m concerned.

We heard from various speakers and were serenaded by the Daughters of the American Revolution Chorus and Thomas Lauderdale who played a grand piano that had been brought in for the occasion.

The last speaker of the day was former Oregon Governor Ted Kulongoski. And he surprised us all by sounding like a cycling advocate. He gave such a strong endorsement to biking in the gorge that I personally thanked him afterwards (and then asked for his speaking notes so I could make sure to get all his quotes right). Here are the salient passages:

In 2016, one can ride a bike from Portland to Cascade Locks without being forced to the shoulder of Interstate 84… All but 10 miles of the Historic Highway remain to be connected. Two of those miles, between Lindsey and Starvation Creeks, will open this September. Three more miles between Wyeth and Lindsey Creek will open in 2018.

The final five miles of the State Trail have the greatest obstacles and the greatest costs. But when they are done, people from all over the world will again come here, this tikme with their bikes to ride all 73 miles from Portland to The Dalles, without having to venture onto I-84, representing one of the most unique, long-term and attractive cycling experiences in the United States!”

Kulongoski asked everyone at the ceremony to commit to getting those last five miles built in the next six years. That shouldn’t be too hard, seeing as how Samuel Lancaster built the original 73-miles of highway in just nine years. And then Kulongoski invited us all to an event in The Dalles on June 7th, 2022 where we’ll dedicate the fully restored highway and trail, “With cyclists from across the nation and around the world who will then join us for a ride to Troutdale.”