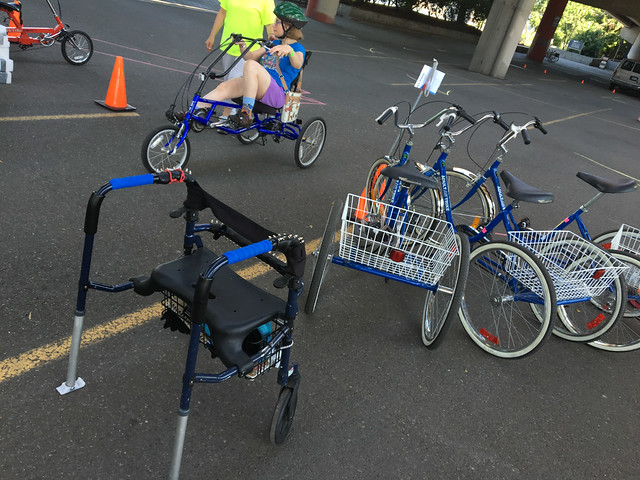 Adaptive bikes allow people to ditch their walkers and wheelchairs for something a lot more efficient and fun.
(Photos: J. Maus/BikePortland)

“Demo days” are a common thing in the bike industry. It’s where a company parks their truck and tent at a trailhead and offers free test rides. They bring all the sizes and models so that everyone can try out a bike. But as we’ve learned recently in a robust conversation about access to the city’s bike share program, “everyone” often only includes people who are physically able to ride a common, two-wheeled bicycle.

On Sunday a host of organizations — including the City of Portland — hosted the 12th annual Adaptive Bike Clinic. It was an opportunity for anyone — including people with disabilities — to test ride the bike of their dreams. 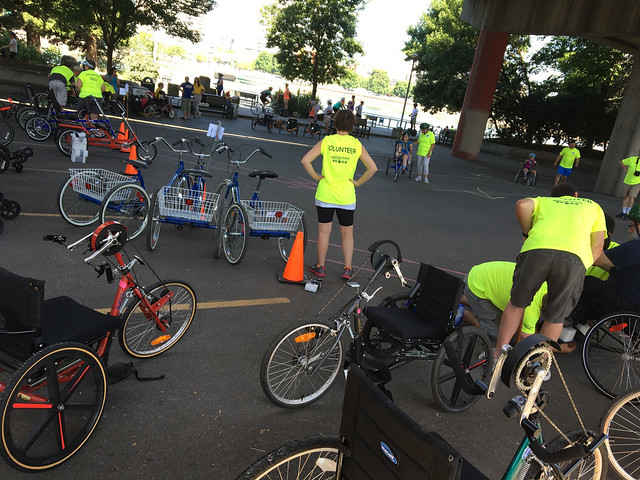 When I rolled up the scene was bustling: Volunteers helped people onto bikes while riders whirred around the test track on all manner of wheeled-vehicles. There were three-wheeled recumbents — some you pedaled with your feet, others with your hands; high-end trikes with racing wheels; and even a hand-powered tadpole trike meant for off-road riding. 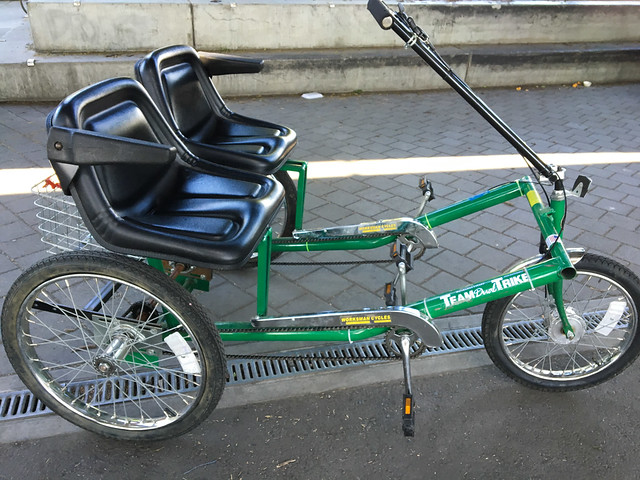 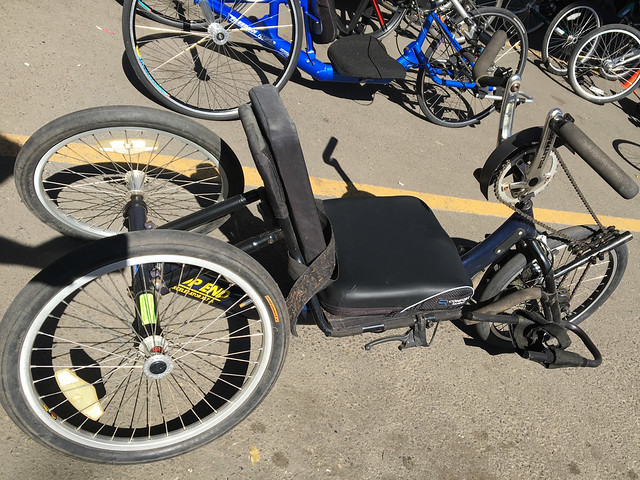 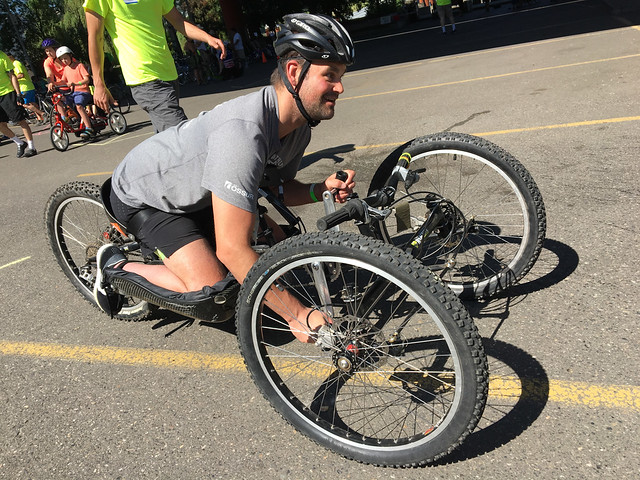 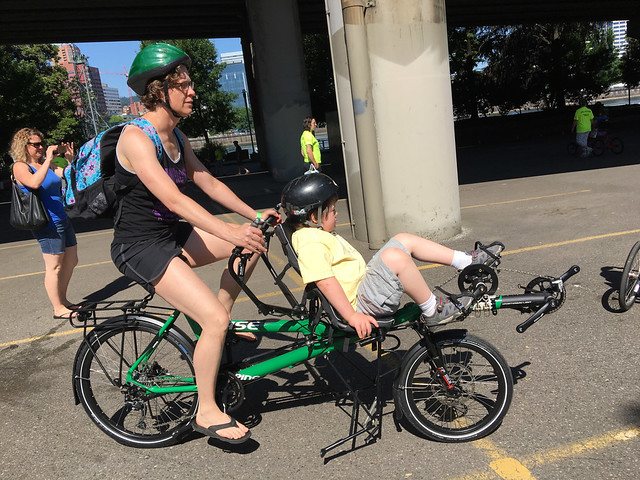 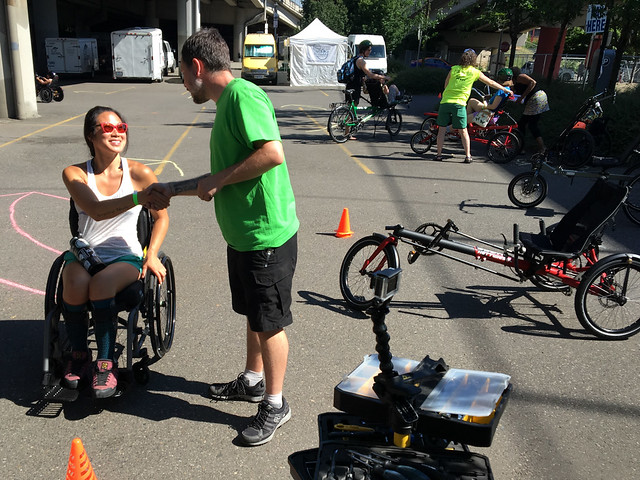 Adam Amundsen from Different Spokes was there help with bike repairs. 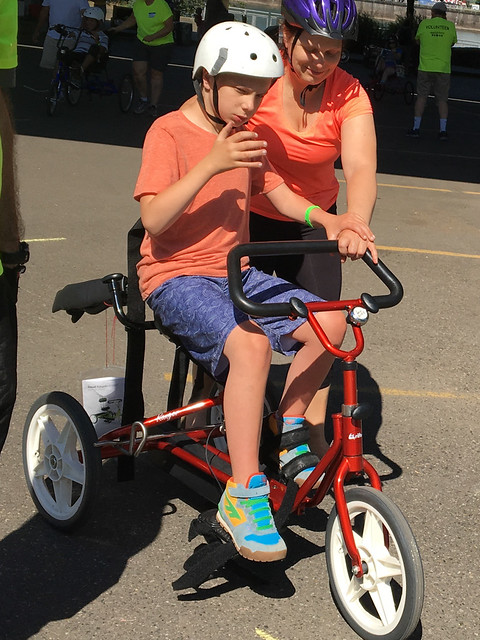 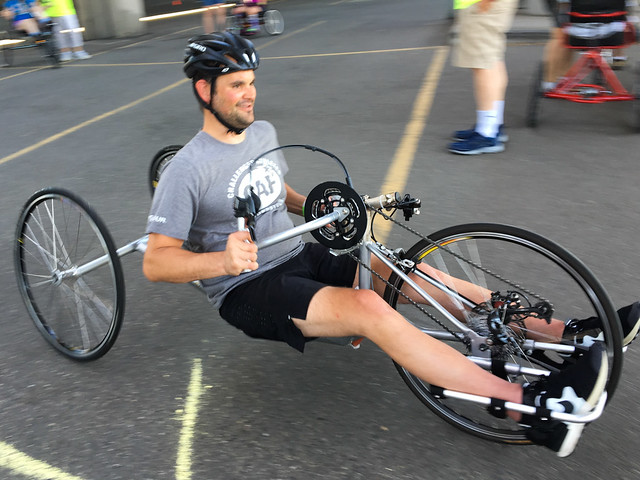 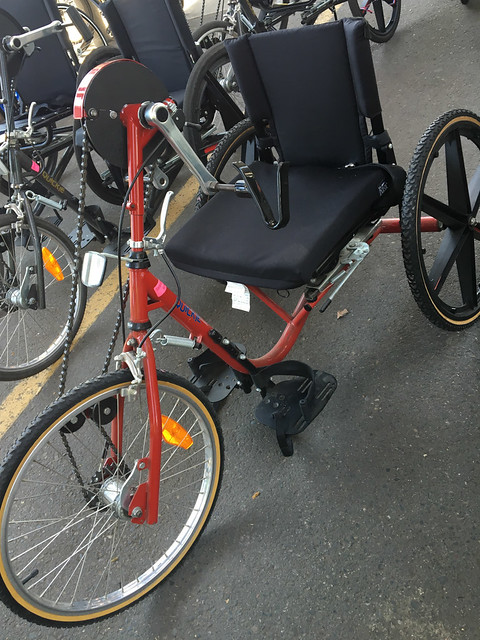 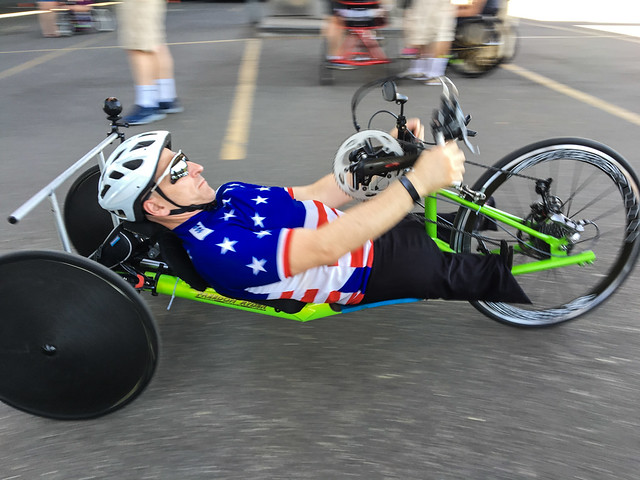 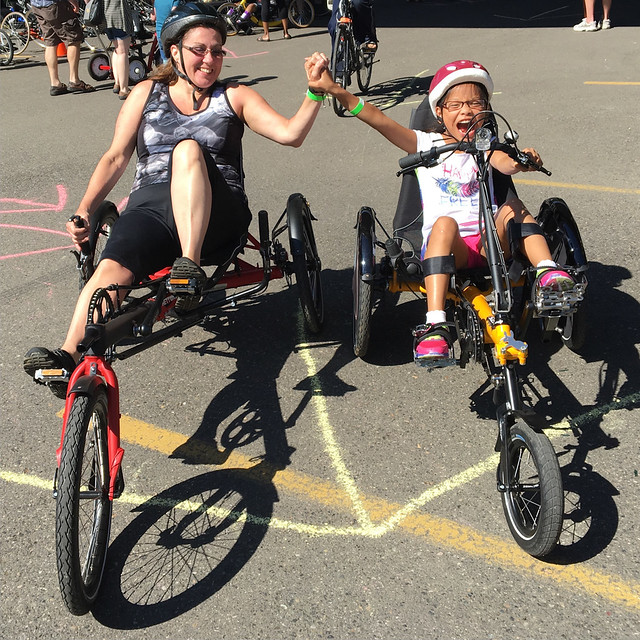 Lauren Fields (below) came with her mom Sonda Fields. She’s been riding a handcycle that doesn’t fit her and they haven’t been able to afford a new one. Sonda hoped they’d find one to borrow at the clinic 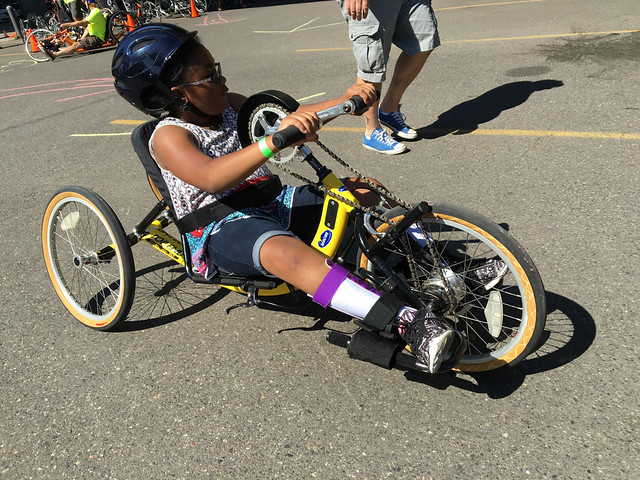 Meghan Fletcher had her eyes on her nine-year-old daughter Emma who was happily pedaling laps on a metallic red handcycle. Emma was born with spina bifida, a condition that impacts the lower back and can cause weakness and paralysis in the legs. “We tried a regular bike with training wheels,” Meghan said, “But she just didn’t have the strength. It was difficult to keep up with friends.” Emma has borrowed a handcycle from Shriner’s Hospital for the past year and the Fletchers were hoping to go home with another one. “She loves it,” Meghan said, as Emma rolled by on another lap. 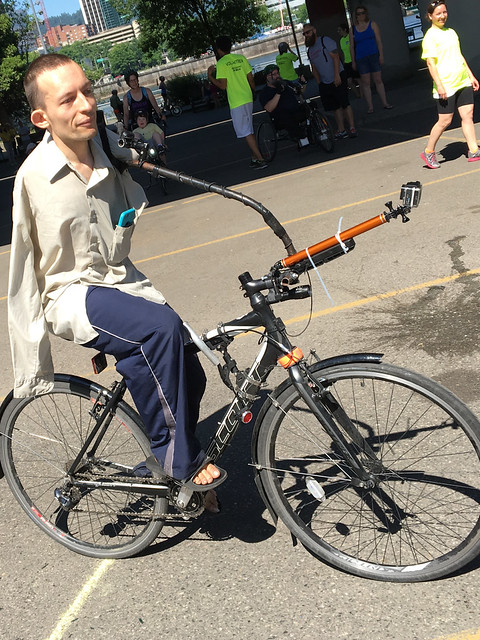 30-year old Michael Trimble wasn’t at the event to try out a bike. He made his own because there’s not exactly a booming market for a bike that can be ridden by someone without arms. Yes, Trimble is a daily Portland bike rider despite being born without arms to steer with. He was born in an orphanage in Chernobyl in the former Soviet Union, the same year (1986) the town experienced the worst nuclear disaster in history. He came to the United States in 1992 and tried biking as a kid in boarding school when he was 12.

“But I was told it was impossible to do what I wanted to do, that I was a legal liability,” he shared. Ten years went by before he tried it again. “I just woke up one day and said, ‘Goddamnit!, I want to bike!’” Biking has become one of Trimble’s passions since moving to Portland a year ago. He lives on Southeast Hawthorne near 33rd and commutes by bike up to the Lloyd Center every day. “I bike about 17 miles a day,” he said, with a strong sense of pride. “Last month I did 502 miles.” 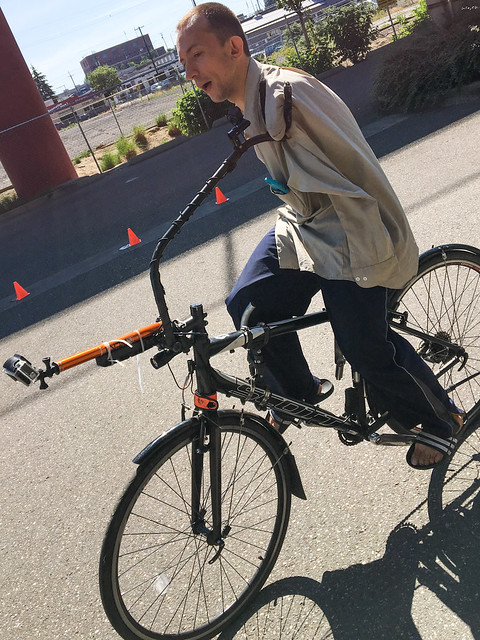 Trimble’s bike is a marvel. He designed with a big assist from Adam Amundsen at the Different Spokes bike shop in southeast Portland. Instead of a handlebar that’s perpendicular to the top tube, Trimble’s bike has a bar that comes straight up toward his shoulder. He uses the small appendage on his shoulder to steer the bar. Braking is done with the inside of his right knee via a custom lever attached to the top tube. The 11-speed rear cassette is shifted with an electronic, push-button Shimano Di2 system that he operates with his chin. To expand the gear options the Schlumpf crankset can be shifted with a tap of the foot. 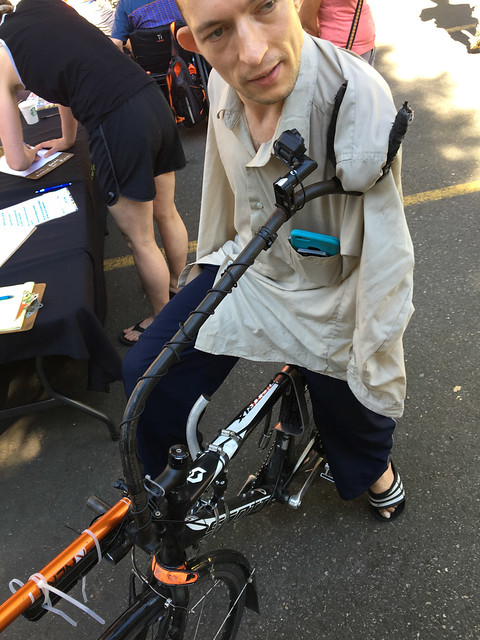 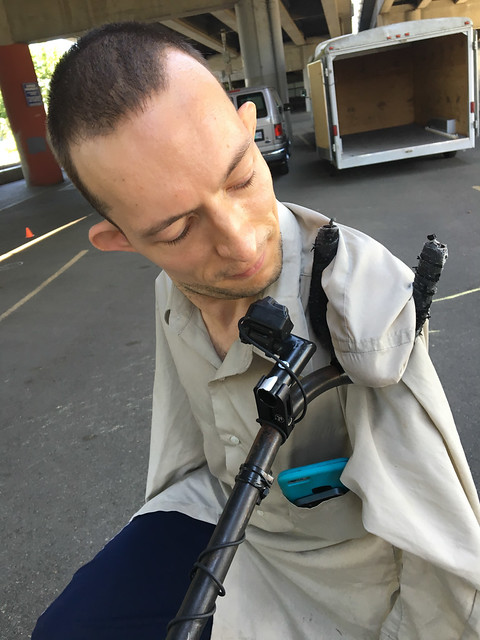 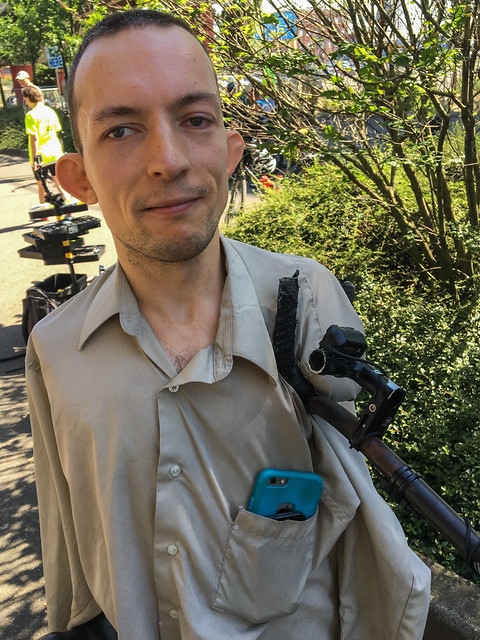 When he mentioned something about his tires, I asked what happens if he gets a flat. While he definitely tries to avoid them, he didn’t seem too afraid of the prospect. “I just change it,” he said nonchalantly, “it takes me about 20 minutes.” He was also happy to demonstrate how he locks up with his bike with his lightweight titanium Tigr lock.

Jutting out from the front of Trimble’s bike is a GoPro camera so he can video all his rides, some of which he shares on his YouTube channel.

Trimble loves talking about his cycling experiences. He’s even pitched The Ellen Show in hopes of hitting the talk-show fame jackpot. He says his goal is to show that anyone can ride a bike, “Whether you’re deaf or blind, or even, forgive me, Donald Trump.” And he plans to keep putting in the miles in hopes of making it to the Paralympics someday.

The next person I met was Richard Fletcher. I didn’t realize it at the time but he’s the uncle of Ms. Emma Fletcher from above. Richard is 44 and also has spina bifida. He looked to be having a great time on a handcycle when I asked him if he rides a lot. My jaw dropped when he replied, “This is my first time.” Richard said the only reason he showed up was because Emma was coming so he figured he’d tag along. What else do you for physical activity I asked? “Not a lot,” he said, “Except play video games.” 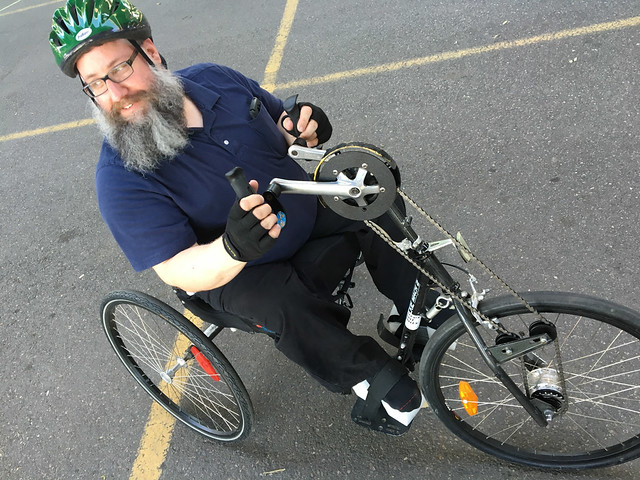 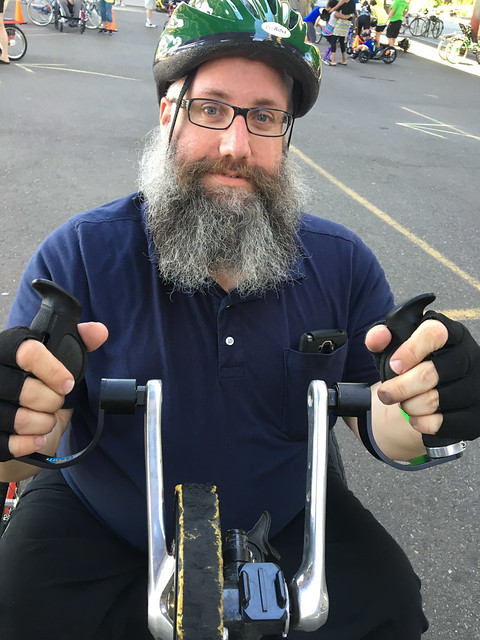 Richard lamented how slow his wheelchair is, and how hot it gets while using it. “This is great,” he said with a smile during a brief stop on his test ride. “I can actually get some wind going… I’ve gotta’ get one of these. I’d ride every day if I had one.”

Adam Amundsen from Different Spokes said Richard’s experience is common. And wheelchairs aren’t just slow and inefficient compared to a handcycle, there’s another big reason people want to give cycling a try. “On a chair people don’t talk to you much, it can be very isolating socially. On a handcycle everyone wants to talk to you. It’s a real conversation starter.”

With the recent conversations around the accessibility of Portland’s Biketown system, PBOT’s bike share program manager Steve Hoyt-McBeth was busy at the event talking with people, testing the bikes, and taking notes. “I’m here to learn more and listen to what people in the community need and how the city can serve that need.” 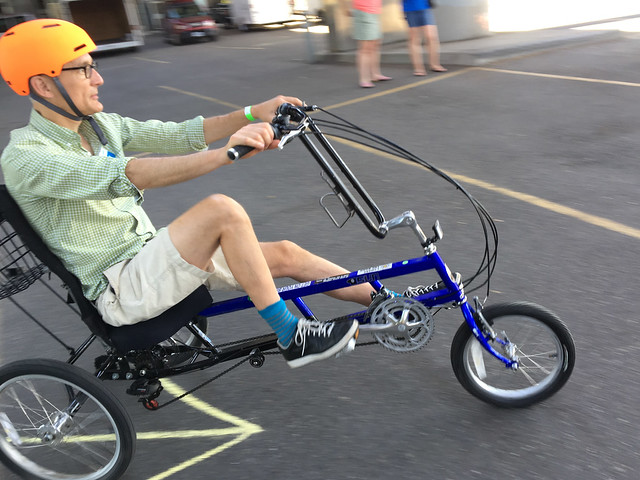 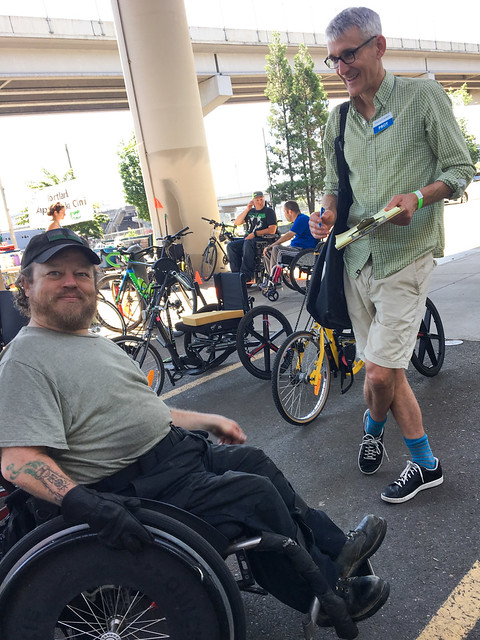 I’ve known about adaptive bikes for a long time, but it’s been eye-opening to get know more about them and the people who ride them.

“Everybody here is a cyclist,” Amundsen said. “We are all on the same team. We all want to move around under our own power.”

The post At the Adaptive Bike Clinic, there’s truly a bike for everyone appeared first on BikePortland.org.