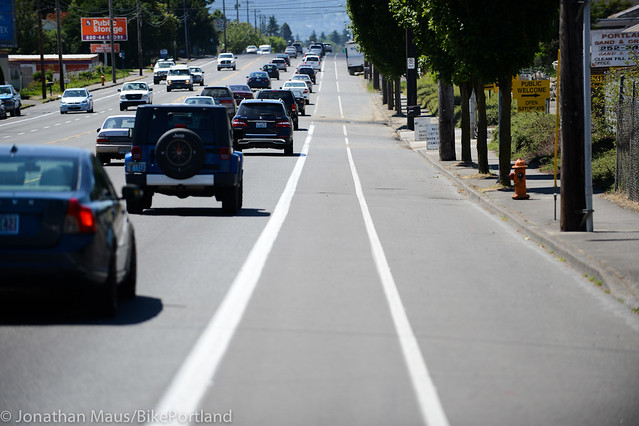 Is there congestion in this photo? Depends on who you ask.
(Photos: J. Maus/BikePortland

The stage is set. The priorities are already being set. It’s time to let Oregon’s leaders know what kind of transportation system you want.

The first public hearing on a transportation funding package that will be proposed in the 2017 Oregon legislative session happens on Monday (6/13) in east Portland. The committee hosting the hearing is the Joint Interim Committee On Transportation Preservation and Modernization — a name that shows a few of the political cards already being played.

After its failed attempt to raise $343 million in the 2015 session, the State of Oregon will try once again to put together a package that will survive what is likely to be a robust public and political debate. These early months of the process are crucial because how the problems are framed today will dictate the solutions proposed tomorrow.

This is a game where winners and losers are often decided before the final whistle blows.

So far, Governor Kate Brown and other leaders are talking about the horrors of congestion more than any other problem. Monday’s meeting will coincide with a “congestion tour” and the press statement for the event mentions no other issue. ODOT has also created an infographic (below) that lays out the “state of congestion”: If being stopped in traffic while we drive is considered the most pressing problem, how will we balance that with the many other important issues we face? Will the package help the people and places that need it most? Will it perpetuate existing problems or forge a different path?

We’ll be covering this as close as possible in the coming months, but here’s where things stand today. Cover of the report.

The starting point of the debate is the 47-page “Our Oregon” report from the Governor’s Transportation Vision Panel. Released on May 17th, it strikes some good chords (support for jurisictional transfers, transportation demand management, and bicycle tourism just to name a few), but there are reasons to worry that the legislature is poised for another highway-widening binge similar to the one they passed in 2009 (and whose final projects are just now wrapping up).

The last page of the report puts a dollar amount on the state’s priorities. While by no means an official proposal, this “snapshot” of the “sense of scale” that the state feels would be needed to “meet our transportation challenges” is revealing: As you can see in the graphic, with an annual investment of $964 million the panel would spend: $324 million on maintenance and preservation, $257 million on seismic resiliency, $250 million on “bottlenecks” (a.k.a. highway widening), $108 million on transit, and last and least — $25 million on bicycling and walking.

For context, the panel wants to spend $25 million on each of the 10 highway bottlenecks they’ve identified and the just adopted Oregon Bicycle and Pedestrian Plan calls for an annual investment of $100 million.

To close that gap, the panel suggests three ways to pay for bicycling and walking infrastructure: a bicycle excise tax or an increase in set-asides for active transportation from the State highway and federal highway funds.

The panel wants the Legislature to consider a new tax on the sale of bicycles “to ensure that bicyclists are contributing to the infrastructure they use.” They see this tax as being much more feasible than a registration or licensing scheme because it would have lower administrative costs relative to potential revenue. The panel says a tax of 5-10 percent would create “substantial” revenue. They estimate a 1 percent tax on new bicycle purchases would generate $439,000 a year.

According to the panel, a bike excise tax could be a non-regressive tax because it could be structured to only apply to new bicycles over a certain value. Exactly what types of bikes and/or equipment would be exempt is still up for debate.

You can download the full Vision Panel report here. 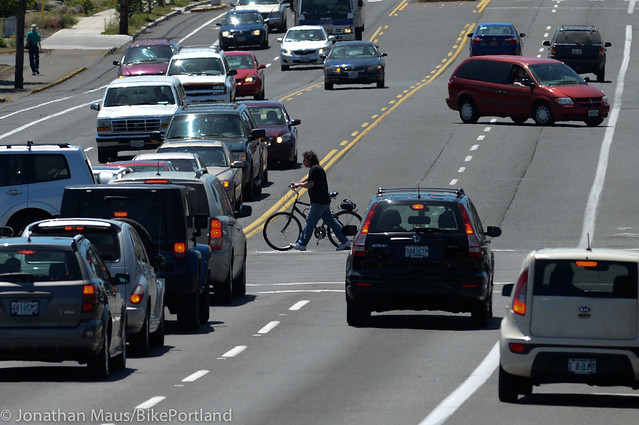 An environmental justice group will host a press conference before Monday’s hearing to give voice to people that live in neighborhoods, “with historic underinvestment.”

Because of the 2015 funding effort, transportation advocates are hitting the ground running this time around. A coalition convened by the Oregon Environmental Council — that includes the Bicycle Transportation Alliance, OPAL Environmental Justice Oregon, Transportation for America, and others — made formal comments on the Vision Panel report back in March.

Earlier this week the BTA laid out their demands. Advocacy Director Gerik Kransky said the package must:

be robustly multimodal, increasing transportation options across the state
benefit and not harm vulnerable communities
increase safety, reduce pollution, and improve health outcomes
be transparent on decisions about transportation investments.

As you can see with the term “multimodal” in the first bullet point, the 2017 funding debate will one of the first major tests of the organization’s new, non-bike-centric advocacy approach.

The BTA, through this aforementioned coalition, has already weighed in on the bicycle excise tax. In comments to the Governor’s Transportation Vision Panel project manager on March 3rd, they wrote:

“While a ‘bicycle excise tax’ is perhaps the least problematic bicycle user fee, given that administrative costs might be fairly low, it constitutes a new sales tax, which Oregonians have shown no willingness to support in the past. A new sales tax on bikes would also be regressive; adding even $40 to the cost of a serviceable daily commuter bike (which can cost around $400) is likely to reduce the number of people who switch to bike commuting. Remember that bike commuters reduce congestion and pollution.”

OPAL Environmental Justice Oregon is bringing their push for more transportation options and safe streets right to legislators on Monday. They’ll hold a press conference in the plaza outside the hearing an hour before it starts.

Can ODOT be trusted? 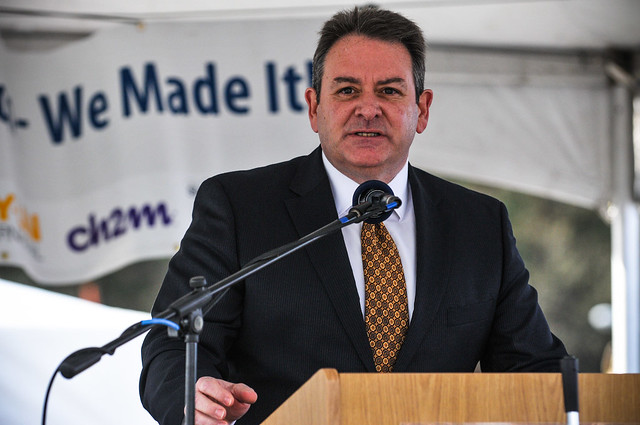 Embattled ODOT Director Matt Garrett at the opening of the Sellwood Bridge in February.

One thread of the upcoming debate will likely center on ODOT management. The fallout from ODOT Director Matt Garrett’s miscalculation (or lie, depending on your perspective) about greenhouse gas emissions targets that led to the demise of the 2015 funding package are still fresh. Some legislators called for Garrett’s resignation after that flub.

The case that ODOT’s governance must change before they’re trusted with new revenue was strengthened when former Metro president David Bragdon went on a speaking spree back in October that level serious criticisms at the agency.

Then on Tuesday another shoe dropped: The Portland Tribune reported that a high-ranking ODOT advisor on trucking has accepted a $35,000 a year job on the board of a company he’s supposed to regulate.

This debate is just starting, but the time for us to set the narrative is now. It’s clear the Governor and top legislators want to tilt the spending toward highway widening in the false hope that it will “eliminate bottlenecks.” They think bigger freeways will magically allow trucks and cars to speed across our state without delay.

Come on. We’re not that naive are we? This is Oregon. We should know better. The question is, will people who see a different path forward have enough time and enough influence to educate those who cling to the status quo?

We’ll find out starting on Monday. The hearing starts at 5:00 pm in the Great Hall Conference Room of the Mt. Tabor Building on the campus of Portland Community College Southeast (2305 SE 82nd).