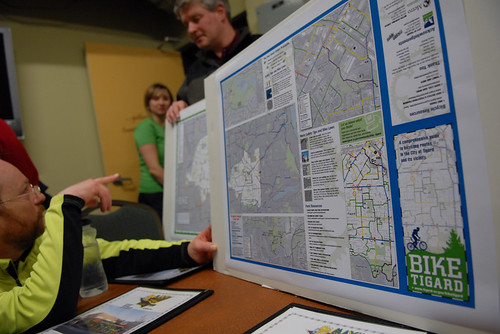 A BikePortland Get Together in Tigard in 2010. The city’s trail system consistently ranks highly for state grants.
(Photo: J.Maus/BikePortland)

As we reported Wednesday, Portland’s proposed Flanders Crossing Active Transportation Bridge across Interstate 405 made the cut for probable funding from a two-year, $45 million state program.

On Friday, the state released a full list of 75 project rankings from the final review committee for the lottery-backed Connect Oregon program.

Of those, 37 fit into the top-priority $45 million worth of projects.

Among the tentative winners were three multi-use path segments in the metro area: $700,000 for the Tigard Street Trail in Tigard; $400,000 for Waterhouse Trail Segment 4 in the Tualatin Hills Park and Recreation District; and $1.2 million for the Kronberg Park Multi-Use Trail in Milwaukie.

Other bike-related projects from the area didn’t appear to make the cut. Those included trail improvements from Memorial Park to Boones Ferry Park in Wilsonville; a better multimodal crossing of the Burlington Northern Santa Fe railroad tracks at Naito Parkway in northwest Portland; an off-street section of the Red Electric Trail in southwest Portland; Phase IV of the Gresham Fairview Trail; and a Bike Hub at the Mount Hood Villages.

Various bike-related projects around the state also seemed to score funding, including paths and trail segments in Yamhill County, Redmond and Island City.

Mass transit projects fared relatively well in this round of the program, which now in its sixth two-year cycle. Four of five transit projects around the state made the tentative cut for funding, taking in 15 percent of total costs, the highest ratio to date for transit.

The other categories are aviation, marine/ports and rail.

The Oregon Transportation Commission, the gubernatorially nominated committee that oversees the Oregon Department of Transportation, will hold a public hearing on the funding list July 21 and make final decisions at its Aug. 18-19 meeting in Klamath Falls.