The ride will use parts of the Willamette Valley Scenic Bikeway.
(Photo: Russ Roca/The Path Less Pedaled for Travel Oregon)

Two Portland-based grassroots groups are biking to Salem this month in an echo of the tactics that built pressure for Oregon’s 1971 bike bill.

“If 700 people died in a crash or collision as a one-time event, the state would prioritize everything that could be done to prevent this kind of tragedy happening,” said Soren Impey, BikeLoudPDX’s direct action coordinator. “But over the past two years, this is what’s happened, and there hasn’t been what we believe is an appropriate type of response.”

Oregon’s 2015 traffic fatality increase was the largest in the country, and fatalities in first half of 2016 have climbed higher still.

After years of declines, 796 people died on Oregon roads during 2014 and 2015. Oregon’s 2015 increase of 27 percent was the largest increase in the country, and state officials say the trend can’t be explained simply by more people being on the roads.

About 16 percent of those who died were on foot, and another 1 percent were on bicycles.

Organizer Gerald Fittipaldi said a group of riders will meet at 7 a.m. on Saturday, July 16 at Pioneer Courthouse Square.

“We’ll be going at a pretty slow pace,” Fittipaldi said. “So we’ll be getting to Salem in the late afternoon, and we’re going to have a rally there. Take photos, have signs, that sort of thing.”

The route isn’t yet determined, but it’ll include some of the Willamette Valley Scenic Bikeway. Celebrating the state’s investment in multi-city bikeways is a secondary goal of the ride, Impey said. 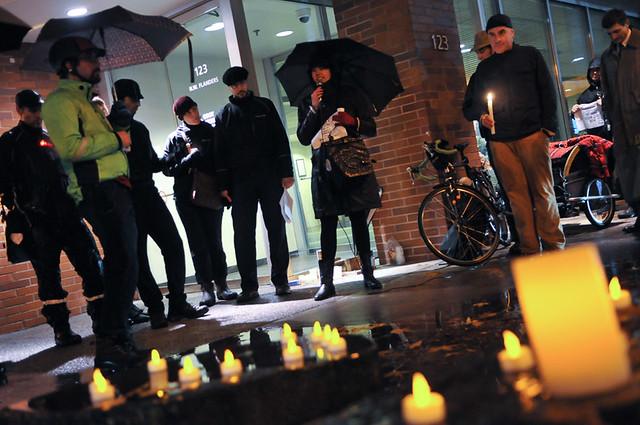 BikeLoudPDX is a Portland-based group founded in 2014 that cut its teeth on a campaign for less auto traffic on neighborhood greenways. This led to a new city program that’s adding diverters and speed bumps around the city. Livable Streets Action is an affiliated group that has led direct actions focused on reducing traffic violence.

“This is the kickoff to a campaign that we hope will continue for some time, up until the 2017 legislature goes into session.”
— Soren Impey, BikeLoudPDX and Livable Streets Action

Impey said the groups can’t achieve their goals without change at the state level.

“Part of this is the kickoff to a campaign that we hope will continue for some time, up until the 2017 legislature goes into session,” Impey said. “The goal is to have future events and future rides leading up to the legislative session so we can try to communicate to Oregon legislators and the governor that there is real grassroots, citizen-led support for funding active transportation.”

Impey said the state’s politicians and other leaders must act to shift priorities at the Oregon Department of Transportation.

“Most of the fatal crashes in Portland occur on high-crash corridors, many of which are run by ODOT,” Impey said. “ODOT, the state, has been dragging its feet on safety improvements for decades.

“The other big issue locally in Portland is speed,” he continued. “Speed is a major contributor to fatal crashes. Once again the state, ODOT, is a real barrier to decreasing speed limits to safe levels on dangerous roads in Portland.”

Fittipaldi said BikeLoudPDX and Livable Streets Action got the concept from rides organized by the Bike Lobby, a Portland-based biking advocacy group in the 1970s. The group, led by Portland State University English professor Sam Oakland, drafted a bill that imagined dedicating a fixed portion of state highway revenues to biking infrastructure.

That concept became a cornerstone of House Bill 1700, the narrowly approved measure widely acknowledged to have made Oregon the state with by far the highest rate of bike transportation.

BikeLoudPDX, too, is preparing a “draft bill” that they plan to vet among other allied groups. It outlines three policies:

1. Safety first — funding for safety improvements should be prioritized on facilities where safety metrics are not met.

2. Fully fund active transportation according to the Oregon Bicycle and Pedestrian Plan (Scenario 4).

3. Dedicate a percentage of STIP and Oregon Connect funding to bicycle and pedestrian safety improvements.

The groups are also in contact with other advocacy groups in Portland and Salem, and hope to get in touch with possible allies in Eugene, Corvallis and elsewhere.

“This is our first ride,” said Fittipaldi. “So we’re trying to build coalitions. We think the ride itself will help get us connected.”