Crews are working overtime to get the final stations installed. This crew installed a station on Salmon Street on Saturday in about an hour!
(Photos: J. Maus/BikePortland)

Less than 24 hours from now Portland will have a bike share system.

Let that sink in.

OK. Now let’s get focused and think about what we need to know about this Biketown thing. Below is a roundup of news tidbits we’ve been collecting for the past few days: The official Biketown app became available for download this morning and is available for iOS and Android smartphones. You don’t need to have the app to use the system, but it has some nice features that you might want to take advantage of.

The map of the system is the most important feature of the app. Open up the slick interface to quickly see where you are in relation to Biketown stations. The app displays a live inventory of not just where the racks are, but more importanly, how many bikes are available at each one. If you want to ride one of the specially-branded bikes (like the current sneaker bikes), look for a special icon on the app.

Other cool features of the app include the ability to reserve a bike (with a 10 minute window), see a history of your rides, and get push notifications about the status of your ride. Notifications are handy if you want to get a message at the end of your ride that you’ve successfully locked the bike and you’re good to go.

How does this thing work anyway?

Biketown is super simple to use. I won’t explain it to you because they’ve released a one-minute video that lays it all out.

A few extra tips I’ll throw in: Remember you don’t have to lock the bike back to a designated station. If you use a standard rack or lock it to anything other than an orange station, you will be charged $2. If you lock it outside the system area you’ll be fined $20. 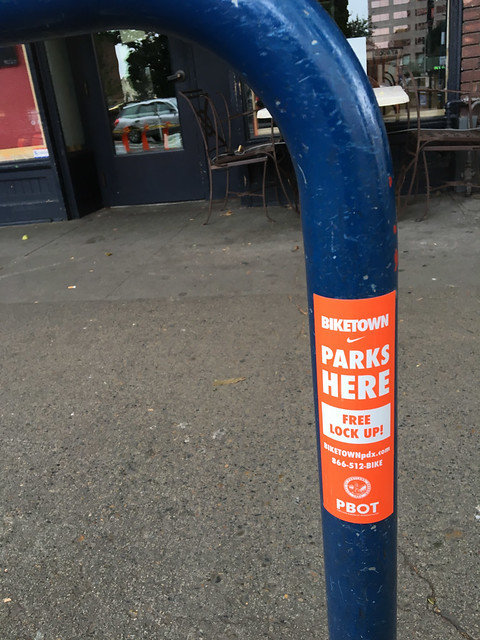 So far the biggest “controversy” has been parking issues in neighborhoods. While some inner southeast residents have been up in arms about how the racks change the street in front of their homes, the issue appears to have died down.

There have also been concerns about how the city removed existing bike parking where they installed Biketown racks. (I have one reader who keeps texting me pictures of his bike locked to them as an act of civil disobedience.) If you’re upset about that, you’re not likely to appreciate this: There are a few standard blue staple racks where bike share bikes can park without the $2 fee. I saw some on 3rd Avenue just south of Ash near the station in the new Ankeny plaza. So yes, in these limited situations Biketown bikes can use standard racks for free, but if you lock your bike to a Biketown station rack it could be impounded.

And here’s a fun parking fact I just learned: If you return a Biketown bike locked away from a designated station, you will receive a $1 account credit. This station at SW and Oak is on the transit mall. The lane closest to the rack however, is off-limits to bicycles.

Bike share is really just another type of public transit and all the studies show that it works best when it’s tightly integrated with existing bus and rail service. That’s why I wasn’t surprised to get an email from TriMet’s bike planner Jeff Owen this morning about how the two systems can play nicely together.

Due to limited space on MAX trains, TriMet has always encouraged people to park-and-ride instead of bringing bikes on-board. Now with many bike share stations located near light rail, TriMet is stating directly that they do not want you to bring Biketown bikes on the train. “One of the best things about bike share is that you only use it when you need it,” Owen wrote in his email today. “Just park or pick up a bike wherever you’re connecting to the bus or train. (Plus, it doesn’t make sense to pay for bike share time on top of your transit fare.)”

Two more notes about Biketown and TriMet have to do with how to ride safely: If you ride on the transit mall (5th and 6th Avenues downtown), remember to stay in the shared lane on the left side of the roadway. The right lane is for motorized transit vehicles only. And if you’re new to biking, or new to Portland, remember to watch for streetcar and MAX tracks. Cross them at a perpindicular angle and be very careful to avoid a crash.

That should do it for now. Any other questions about bike share? Ask away.

There’s a launch event for dignitaries and founding members tomorrow at 11:00 am in South Waterfront with a ceremonial “first ride” over the Tilikum. Then the system launches for the general public at 11:30 am.