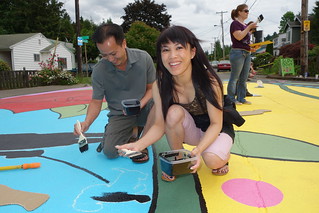 A local organization that arranges for Portlanders to teach one another niche skills and information is offering a four-week introduction to do-it-yourself street transformation.

“I feel like everyday people who aren’t planners… have some idea of what needs improving in the community.”
— Claire Vlach, Portland Underground Grad School

“I wanted to do this because I feel like everyday people who aren’t planners or whatnot professionally have some idea of what needs improving in the community, and I feel like this class could start to give people some tools so that they could start to work towards making these changes that they want to see happening,” said Vlach, who returned to Portland this year after 15 years away.

Most recently, she worked as a planner/designer for Bottomley Design and Planning in Oakland, where she created the permanent version of a successful temporary plaza.

Vlach said tactical urbanism can be a useful tool for quickly making change.

“You can try something out, and if it doesn’t work, it’s no big deal to change it around,” Vlach said. “You’re not moving curbs or tearing up concrete.” 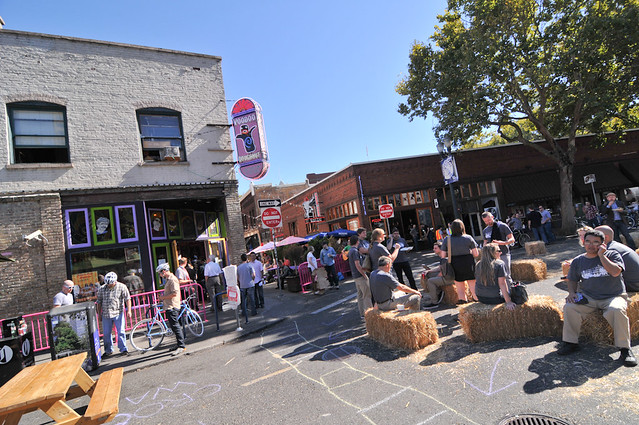 Better Block’s one-weekend plaza on 3rd Avenue in 2013 built public consensus around the more permanent one that opened there this week.
(Photo: J.Maus/BikePortland)

Along the way, she said, she’ll urge them to check out city-sanctioned tactical urbanist projects such as an “intersection repair” mural or Better Block’s temporary Better Naito installation.

That means it’ll overlap with the International Open Streets Summit, a conference that will bring experts in tactical urbanism from around the world to Portland Aug. 18-21.

PUGS is a creation of Douglas Tsoi, who was inspired by his late father’s advice and his friend Sarah Mirk, a Portland journalist whose Summer of Science series invites people to her backyard to talk about their scientific obsessions. Tsoi attends every PUGS class and recruits teachers constantly, often from among the students.

That’s how Vlach decided to lead the tactical urbanism course, she said. She was taking a previous PUGS class about privilege and joining one of the after-class happy hours that Tsoi typically organizes when he asked what course she’d like to teach.

After some thought, she decided this would be an appropriately narrow subject.

“I want people to be able to start to think about not just what’s wrong with the city, but how to fix what’s wrong,” she said. “I think that some people who are plugged into urbanism and whatnot maybe have some ideas of what the channels might be, but maybe some people don’t realize that there are things you can do beyond maybe going to community meetings and giving your input.”