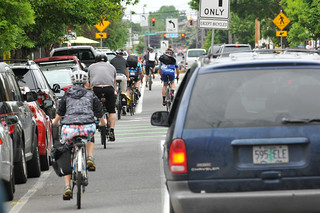 Of all the wonderful ideas in Portland’s Bicycle Plan for 2030, the one I personally hope is never forgotten is its audacious use of a numeral: 25 percent.

That’s the target it set for the share of trips that could happen by bicycle in Portland. Today, the figure is something like 7 percent. Only several dozen cities in eastern Asia and northern Europe, probably, can currently boast 25 percent or more.

But 25 percent is possible and even imaginable, as BikePortland reader Alex Reedin spelled out in a Thursday morning comment estimating the payoff for each step that’ll be required to get us there.

It came in reply to another reader’s speculation that between bike sharing, new greenway diverters and better downtown bike lanes, Portland might be near a “tipping point” for biking.

I’d say there are many tipping points. We’re finally making substantial progress towards some. A few years ago, we were making veery slow progress which was in my opinion partially being taken back by increased driver meanness and shortcutting.

1) Some inner-Portland infrastructure, enough for sort of a network + drivers on average nicer compared to the rest of the U.S. –> enthused, confident, fit, prime-age people with origins and destinations in inner Portland bike, much more so in the summer than the winter. PASSED! (~6-8% mode share)

2) Truly comfortable inner-Portland infrastructure –> interested but concerned people of all ages with origins and destinations in inner Portland bike if they feel like it, much more so in the summer than the winter. MAKING PROGRESS (~5% additional mode share)

3) Some outer-Portland infrastructure, enough for sort of a network –> enthused, confident, fit, prime-age people with origins and destinations fairly close to each other in outer Portland bike, much more so in the summer than the winter. MAKING PROGRESS (~4% additional mode share)

4) Truly comfortable outer-Portland infrastructure –> interested but concerned people of all ages with origins and destinations fairly nearby, much more so in the summer than the winter. NOT EVEN CLOSE (~3% additional mode share)

5) Biking is more convenient than driving for most trips in inner Portland (greenways paved well and made convenient, major street protected bike lanes, car parking expensive/annoying, cars stuck in traffic)–> interested but concerned people of all ages with origins and destinations in inner Portland bike, all the time, unless it’s pouring. People traveling from outer Portland to inner Portland may start to e-bike in sizeable numbers, though still far from a majority (~7.5% additional mode share)

That final step, Reedin confessed in a follow-up, is the hardest and the one Portland is furthest from. But though you might disagree with the percentages he assigns to each step in this recipe, it’s encouraging to break down this difficult civic mission into more or less comprehensible steps.

Of course, the point of bicycling isn’t bicycling. If the 2030 Bike Plan has a failing, it’s that it didn’t create a durable consensus about why it would be a good thing for Portland to achieve 25 percent bicycling mode share.

But of course there are many reasons, from affordability to safety to community to physical quiet to clean air to economic prosperity. As long as Portland can keep moving along this path — and for all our grousing, it clearly is — those benefits will keep arriving in greater and greater amounts.

That’s how our city will, eventually, muster the political will required for that final crucial step.

Yes, we pay for good comments. This regular feature is sponsored by readers who’ve become BikePortland subscribers to keep our site and our community strong. We’ll be sending $5 and a little goodie bag to Alex in thanks for this great addition. Watch your email!