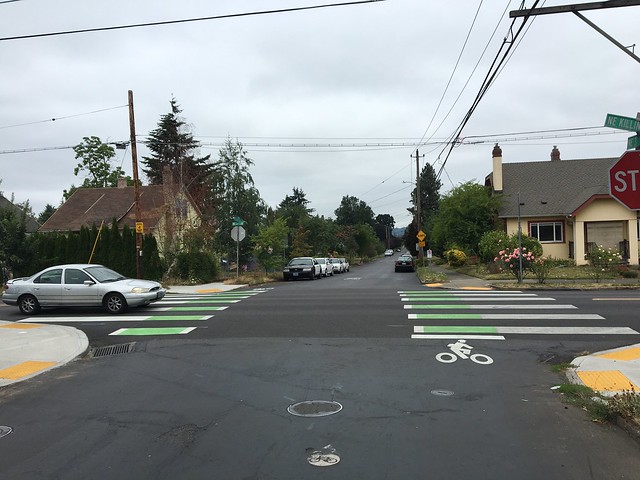 One of the new crossbikes at NE 37th and Killingsworth.
(Photo: J. Maus/BikePortland)

It’s been eight years since Portland proudly proclaimed the color green as its go-to hue for bikes. Now, following in the footsteps of bike boxes and green lanes that have sprouted up all over town, it’s time to say hello to “crossbikes.”

By the end of this week there will be crossbikes at seven intersections around the city. If you see one, don’t fret. Treat them exactly like they sound: sort of like crosswalks, but for bikes. The Portland Bureau of Transportation is set to officially announce the new treatment tomorrow with an educational push (see new sign below) similar to the one they did around bike boxes in 2008. Everything you need to know.
(Image: PBOT)

So far PBOT has striped crossbikes at NE 37th at Killingsworth, NE Going at 33rd, N Williams at Rosa Parks and NW Johnson at 21st. By the end of the week there will be three more: N Michigan at Killingsworth, SE Lincoln at 60th, and NE Tillamook at 15th.

You might notice that all the crossbike locations have one thing in common: they’re on neighborhood greenway streets. Roger Geller, PBOT’s chief bicycle planner, said it’s just the latest effort the bureau has undertaken to make crossings safer on what are designed to be low-stress, family-friendly streets where people on bikes and foot are prioritized.

Geller said it’s an idea he’s be working on for several years (we posted a Q & A with him about crossbikes back in 2011) and it came from how he observed people using curb extensions — where curbs are bulbed out in order to narrow the crossing distance. “When a cyclist was taking advantage of the curb extension and stopped at the end of it, it was clear from our observations that motorists would be paying attention more because they would stop,” Geller shared in a phone interview today. “So we thought, if we put more indicators in the intersection that more clearly signal that this is a crossing, it would lead to even greater awareness.”

“We we wanted to indicate that these intersections aren’t just pedestrian crossings, these are also bike crossings,” Geller added. “The green bike bars indicate this is an extention of the bikeway thru the intersection.”


Here’s how the one at Rosa Parks and Williams as you approach the bike street from Rosa Parks: 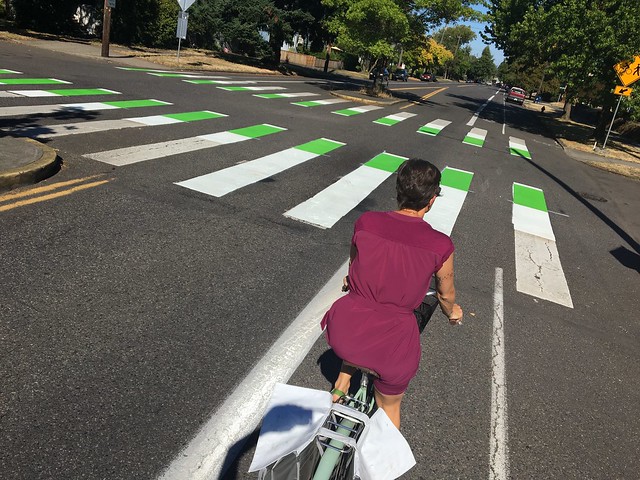 And here’s another view of 37th at Killingsworth: 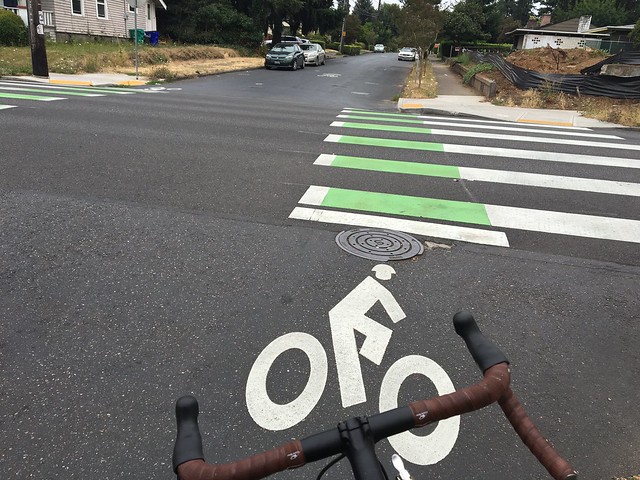 Legally-speaking, crossbikes aren’t crosswalks. In a crosswalk, people are required by law to stop for anyone on bike or foot who shows intent to cross. Not so in a crossbike. But if you’ve walked or biked at all in Portland you’ll know that people tend to happily stop at neighborhood greenway crossings already so these markings should only increase awareness. Crossbikes will also increase the amount of people who stop to let you cross — even when they don’t have a stop sign.

“We want to make things as safe as possible for vulnerable roadway users and for modes that we’re looking to encourage. We think this can be an effective and relatively low-cost way to do that.”
— Roger Geller, PBOT

Keep in mind these crossbike locations aren’t just picked randomly. The cross-street must meet specific criteria that has been vetted by Geller and PBOT traffic engineers. They are only used on what are known as “minor collector streets” — a designation that applies only if the street has (at the most) one lane of traffic in each direction, no more than 10,000 cars per day (with 1,000 in the peak hour) and a maximum speed limit of 30 mph.

PBOT has already set a precedent for using green bars to mark caution areas through intersections; but this is the first time such markings have been used on neighborhood greenway streets (and not on streets with dedicated bike lane). PBOT plans to work with a Portland State University researcher to evaluate the new markings to see whether they improve conditions.

Each marking costs about $4,000 (including signs and crosswalk striping if necessary).

Geller says it’s all part of Portland’s march toward more bike-oriented, safer, streets. “We want to make things as safe as possible for vulnerable roadway users and for modes that we’re looking to encourage. We think this can be an effective and relatively low-cost way to do that.”