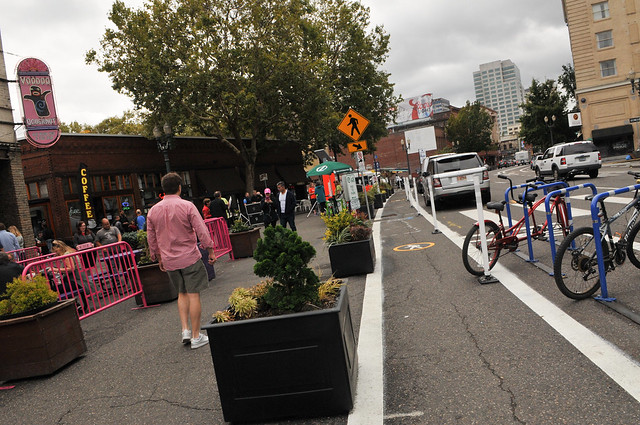 It’s the cheapest bridge project ever completed in the Portland region. For just $20,000, the city’s Bureau of Transportation has changed the face of an iconic and historic part of town. And they’re sort of bragging about it, which is awesome.

At the ribbon-cutting event for Ankeny Plaza today, City Commissioner Steve Novick delighted in how his Bureau of Transportation has radically transformed the streets between 2nd and 3rd Avenues in Old Town/Chinatown. “This is incredibly awesome,” he bubbled, before making a reference to Martha & The Vandellas’ classic tune, “Dancing in the Streets.” 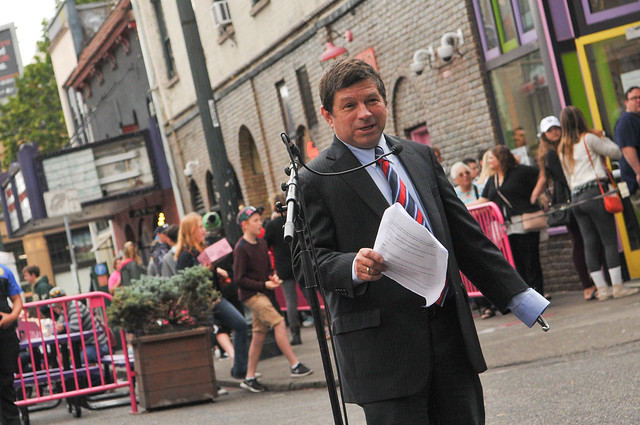 “We did a lot with a little bit of money,” Novick continued, after making a jab at Director Park (a Parks Bureau plaza project just a few blocks west) for being “expensive” by comparison.

PBOT Commissioner Leah Treat also showed confidence not only in Ankeny Plaza, but in what’s to come. “This represents a new chapter for open streets in Portland… and this is just the start,” she said. 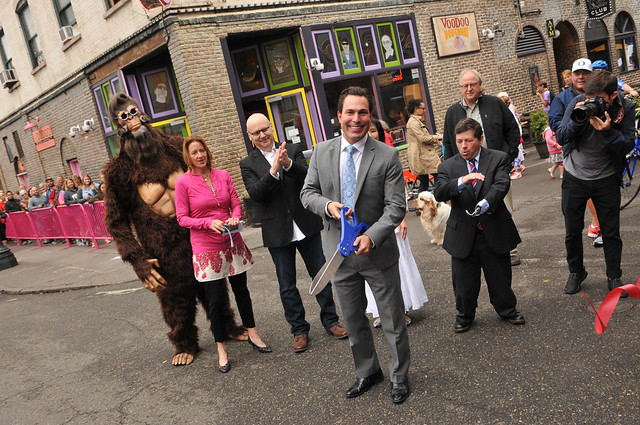 Two years ago, Southwest 3rd Avenue between Burnside and Ash was a wide expanse of road space where only people inside cars could go without feeling harassed. The cross-section was three wide standard vehicle lanes and on-street auto parking lanes on both sides. Then those merry souls from Better Block PDX got organized and staged a demonstration of what a public plaza here could look and feel like. Everyone loved it — including Mayor Charlie Hales and especially Commissioner Novick. Fast forward to last October when PBOT striped buffered bike lanes and then followed that up by the slow and steady build-out of the plaza as it stands today.

“Making it easier for people to explore the neighborhood with safer crossings and slower driver speeds… That is creating a bridge for both sides of the neighborhood.”
— Helen Ying, president of Old Town Chinatown Community Association.

Now instead of three lanes for driving on SW 3rd, there are two. Both on-street parking lanes remain, but the eastern-most one (near Voodoo Doughnuts) now floats in the intersection which has opened up 20,000 square feet of public plaza space. As we previously reported, the plaza has been remade with a walking zone, a new bike corral, a bike share station and cafe tables and chairs that are now along the edges (instead of in the middle) of the street to provide a promenade through Ankeny Alley. Additions in the last week have included dozens of large planter boxes filled with beautiful bushes and small trees from the Chinese Garden a few blocks north. PBOT says they also plan to use these planter boxes to create protection for the new bike lane on 2nd Avenue.

And we can expect more improvements to this area thanks to an $82,000 community livability grant from the Portland Development Commission that the Ankeny Alley Association plans to allocate for “long-term improvements.”

Taken all together — the new buffered lane on 3rd and the new Ankeny Plaza and promenade that connects to the nearly-completed protected bike lane on SW 2nd (more on that later) — we have formed a bridge that connects several of Portland’s oldest neighborhoods. Burnside, and to a lesser extent 2nd and 3rd Avenues, are the rivers in this analogy and they still require caution. But PBOT has slowed the current and has extended a helping hand for anyone who wants to cross. 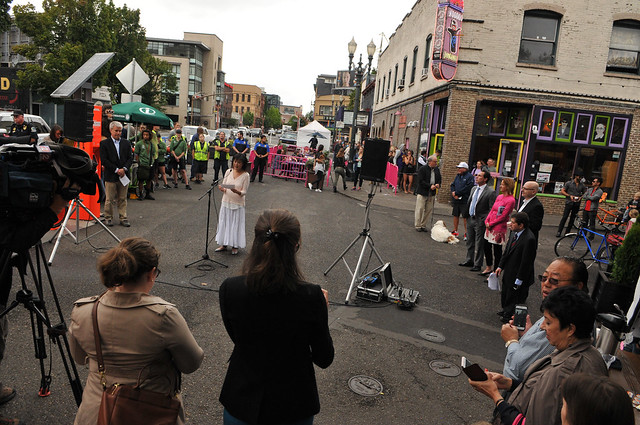 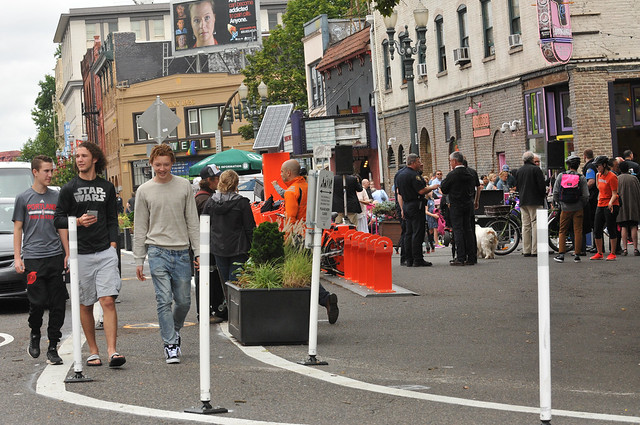 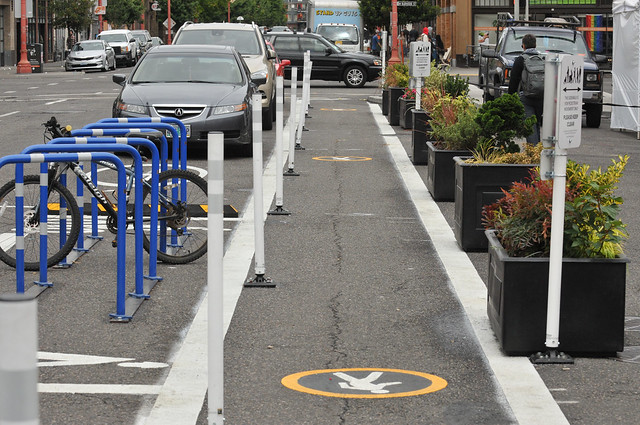 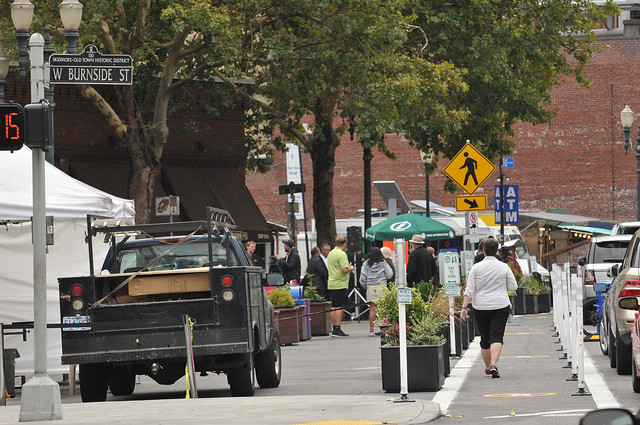 The view looking south from the other side of Burnside. (The truck belongs to workers who are renovating the Paris Theater.) 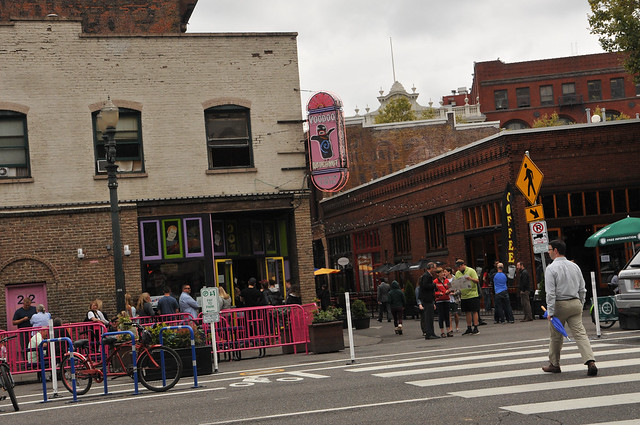 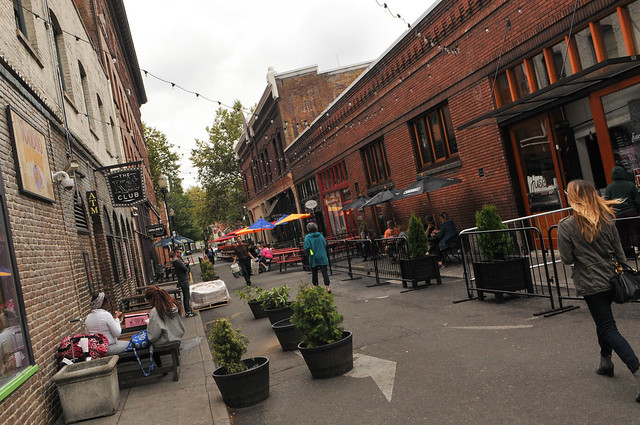 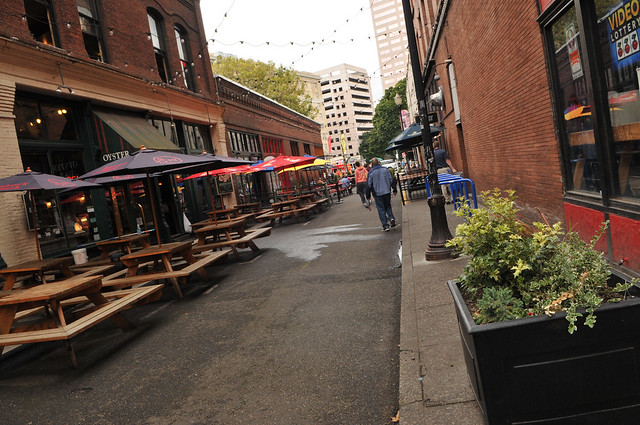 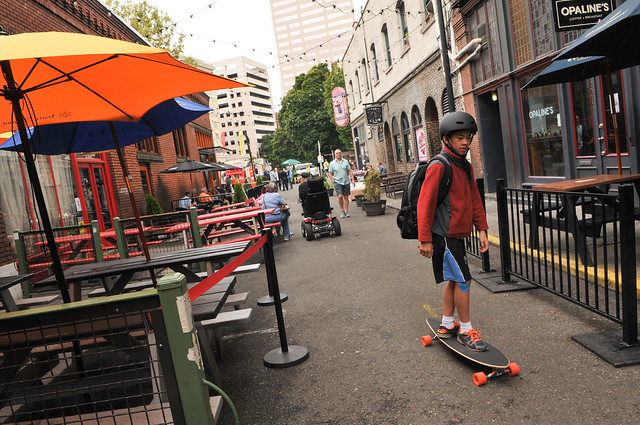 This is a transformation not only of a major downtown intersection; but of the politics that rule our intersections. What bike share has done to encourage and legitimize the use of bicycles, Ankeny Plaza will do to create urgency for more — and even better — street transformations in the future. 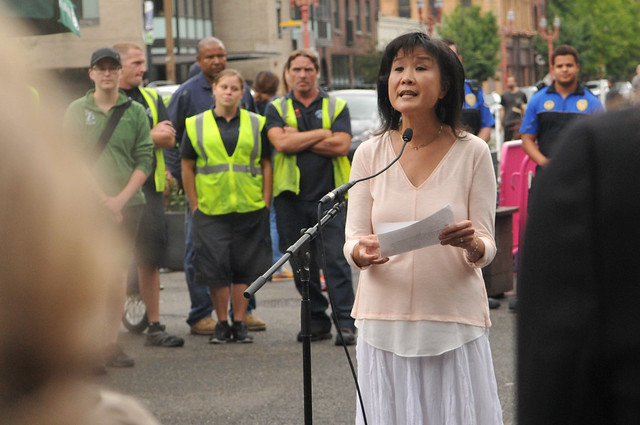 Speaking at the event today, Old Town Chinatown Community Association President Helen Ying said the changes to the streets are a key part to her group’s efforts to, “Make this neighborhood the best in the city.” One of the biggest obstacles to that has been what Ying refers to as, “The traffic patterns and Burnside Boulevard that has divided the north side of the neighborhood from the south side.”

“Making it easier for people to explore the neighborhood with safer crossings and slower driver speeds… That itself is creating a bridge for both sides of the neighborhood.”

From Better Block’s activism and the city’s official embrace of their vision, to the full-throated support and gratitude from neighborhood leaders and the execution of the plaza design itself, we can only hope this project is a template for many others to come.

Commissioner Novick put it best in his brief speech today when he said, “This is what Portlanders want from their government. They want us to implement great ideas, work with the community and implement them in the most cost-effective way possible. And here in Ankeny Plaza we’ve delivered. We’ve all, collectively, delivered.”

Check out PBOT’s new Portland in the Streets website where you can see all their livable streets initiatives.

The post At just $20,000, Ankeny Plaza is Portland’s cheapest “bridge” project ever appeared first on BikePortland.org.