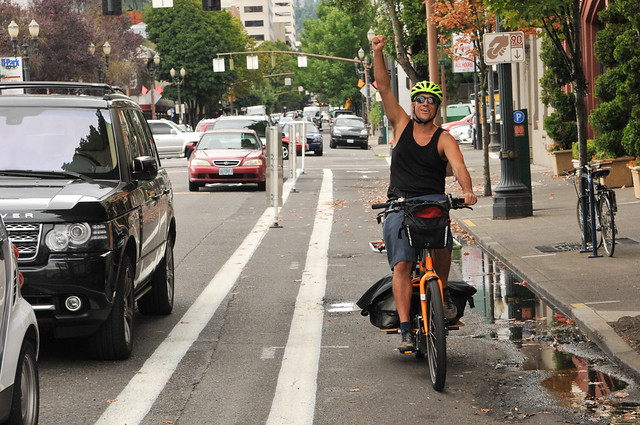 The City of Portland is slowly but surely adding dedicated bicycle access to downtown streets. The latest new bikeway is 2nd Avenue where the Bureau of Transportation has installed a half-mile of protected bike lane from SW Washington to Everett.

PBOT’s Second Avenue Road Reconfiguration Project is part of the same fruitful collaboration with neighborhood leaders and the Old Town Chinatown Community Association that led to the buffered bike lane on 3rd Avenue and the new Ankeny Alley Plaza (not to mention 14 new crosswalks throughout Old Town).

The 2nd Avenue bikeway is the most ambitious physically protected bike lane downtown. The only other facility that comes close is the first protected bikeway we built on SW Broadway near Portland State University nearly seven years ago. Unlike the Broadway bikeway (a location chosen specifically for its lack of cross streets and potential conflicts), this one goes through several intersections and even a few mid-block driveways.

I spent just over an hour observing the facility and biking on it. Here’s what I saw… 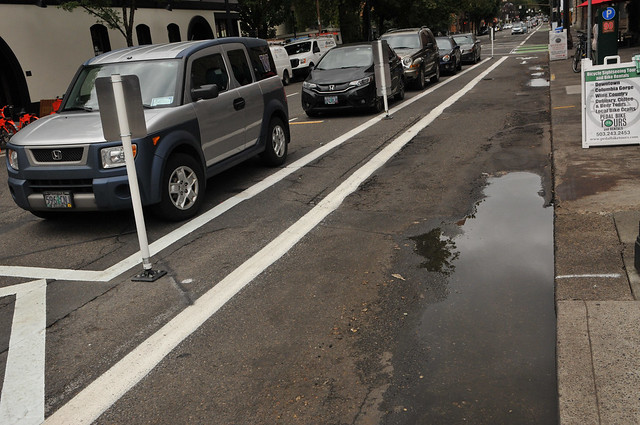 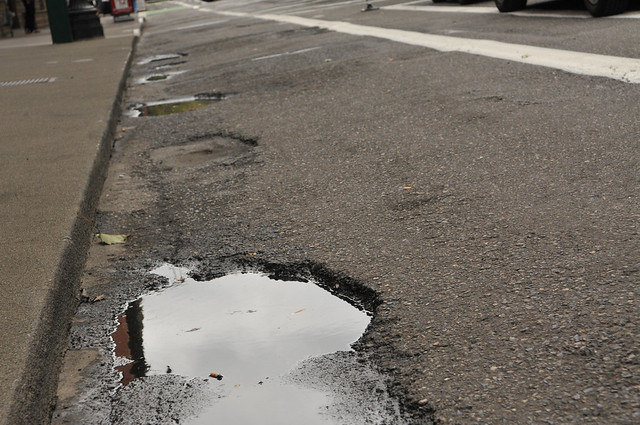 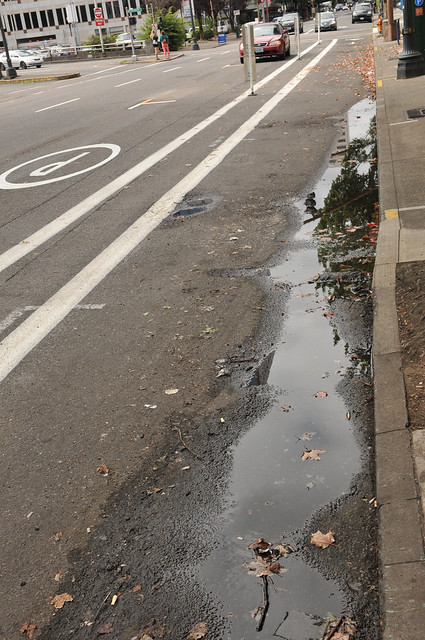 The pavement quality is very poor. There are potholes and cracks that could present a safety problem to some riders. There is also poor drainage. The puddles in these photos are after just a light rain. Imagine what this will look like in November. 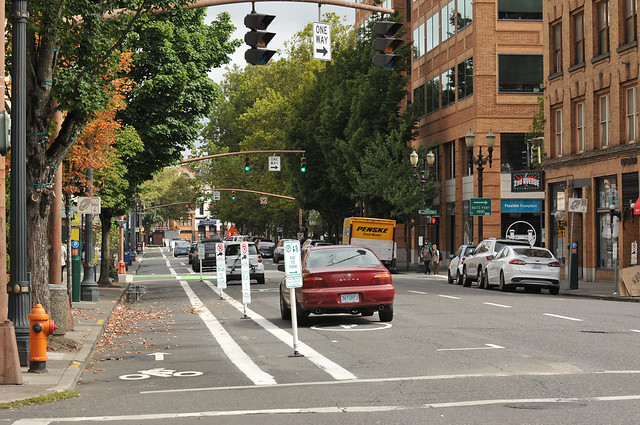 The cross-section: Bike lane curbside buffered from parked cars with plastic wands, then two standard lanes and another parking lane. 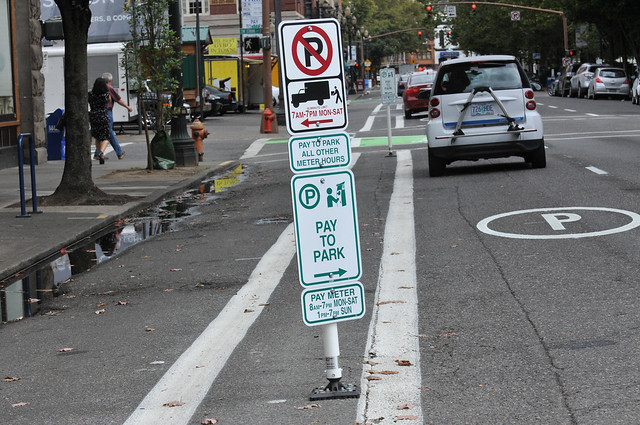 This sign points the right way but unfortunately others have an arrow that points toward the curb, making it seem like you’re supposed to park curbside. 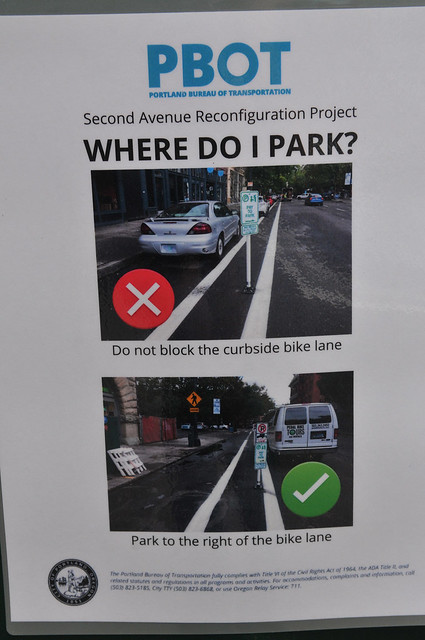 It will take some educational efforts and some time for people to figure out where to park. 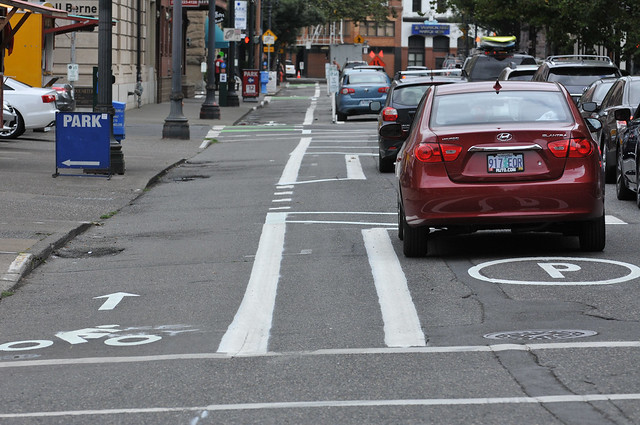 Pretty good parking compliance just a week after it has gone in. 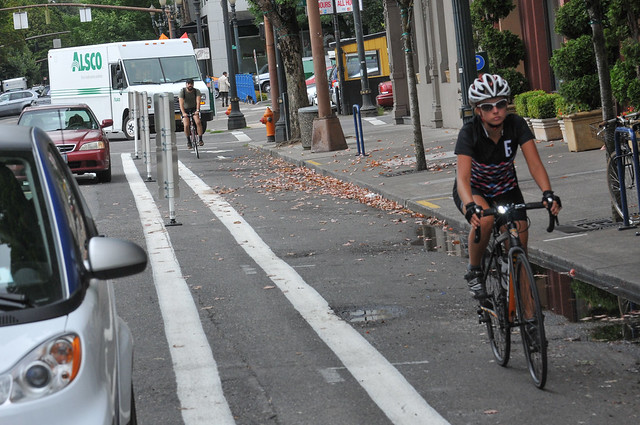 Nearly all the dozen or so people I saw come up on the bike lane opted to use it (instead of remaining in the shared lanes). 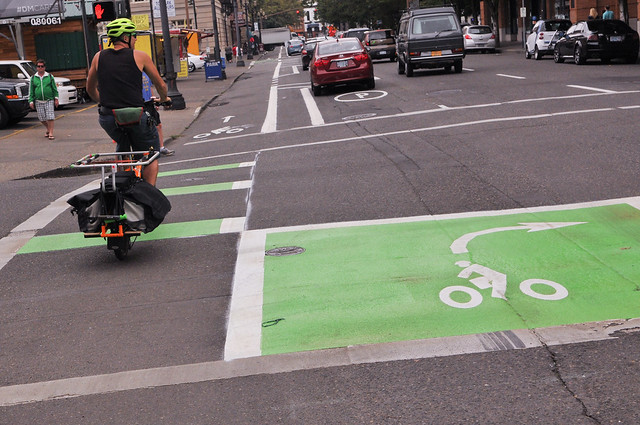 PBOT has used green liberally to mark the lane through intersections and to encourage two-stage right turns. 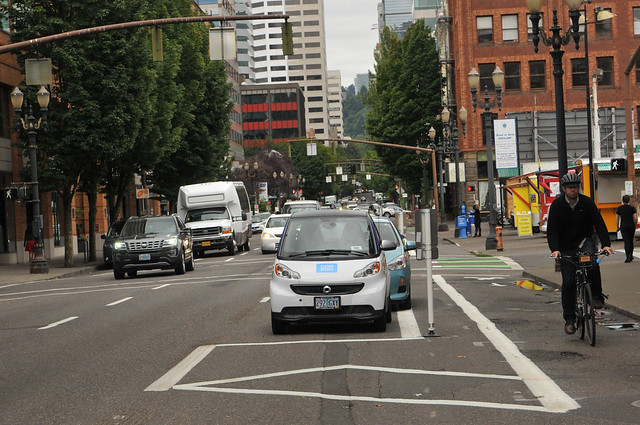 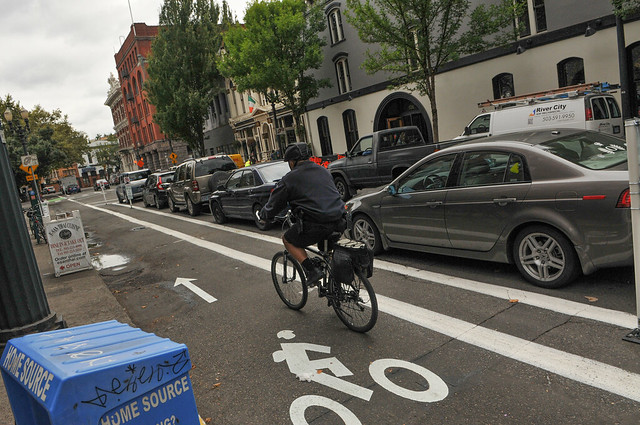 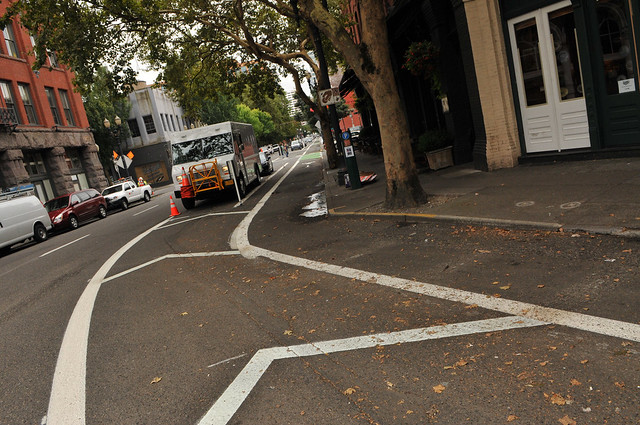 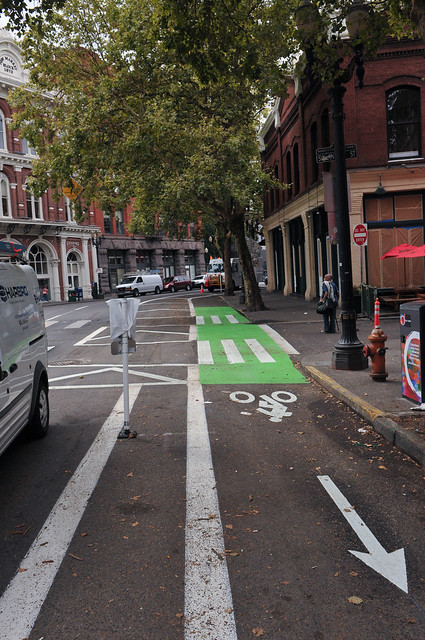 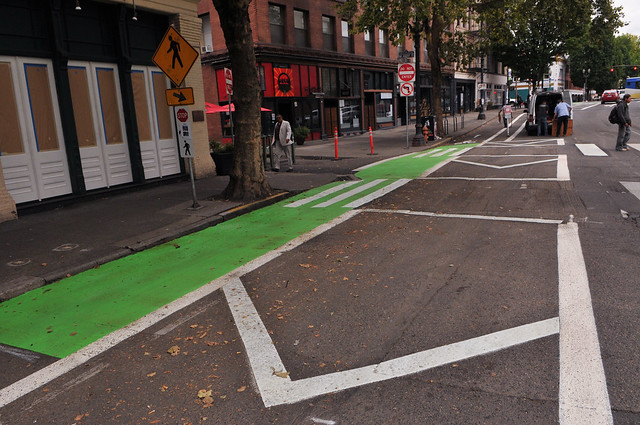 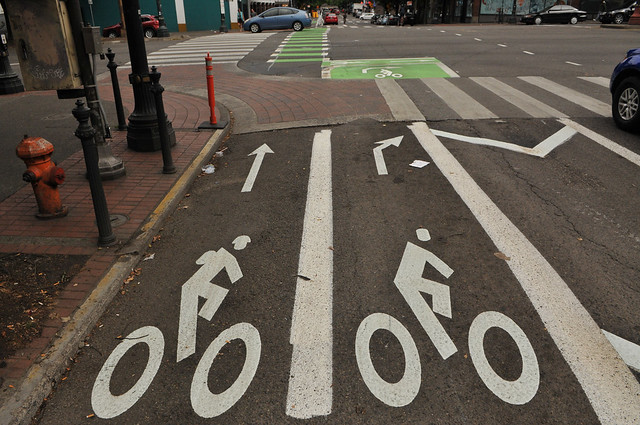 At Burnside PBOT has created two lanes, one for through traffic and the other for right turns. 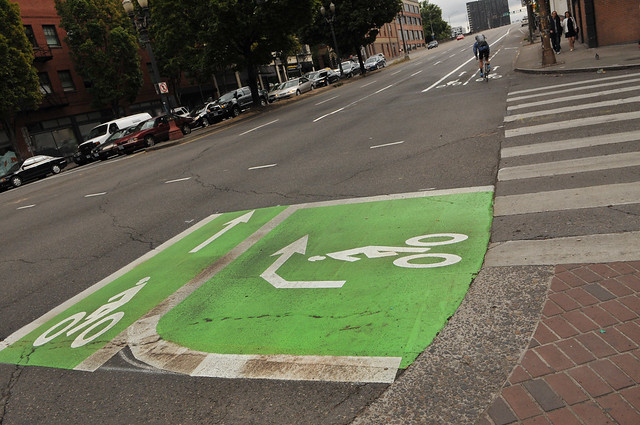 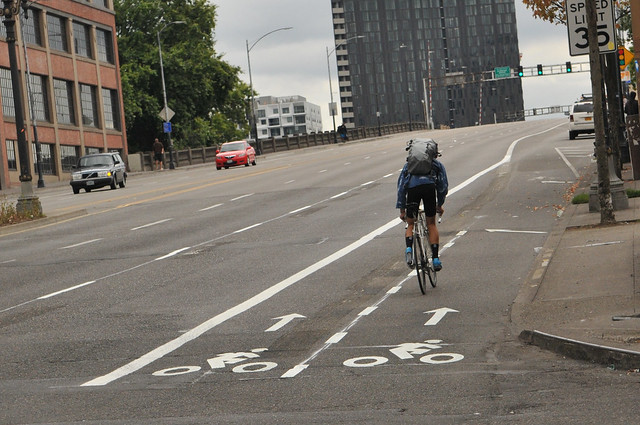 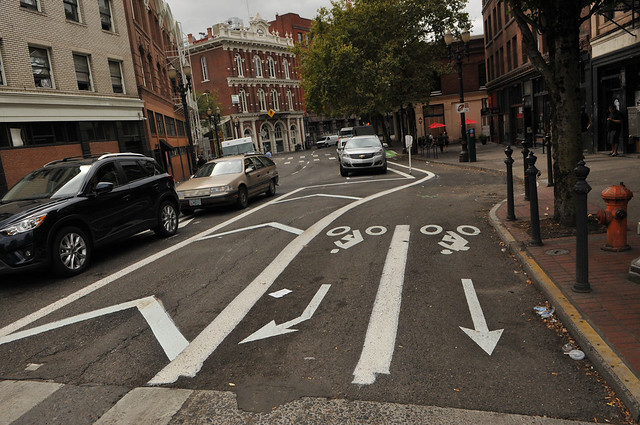 Looking back at 2nd from Burnside. 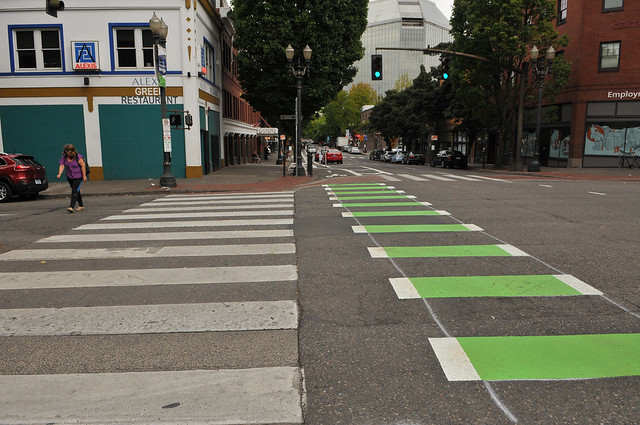 New crossbike to get across Burnside. 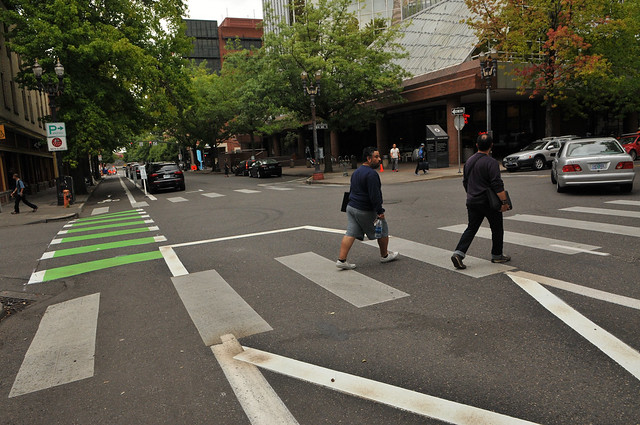 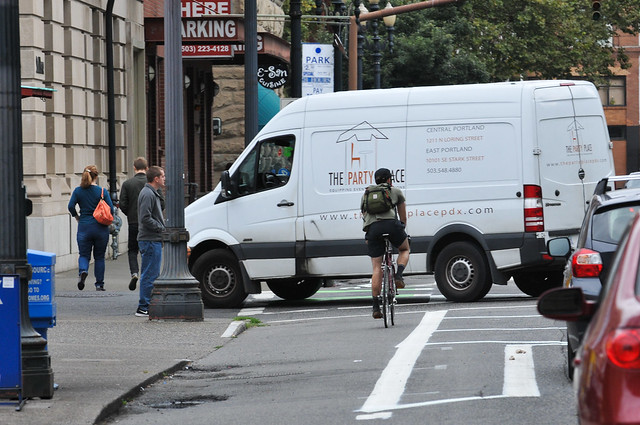 Left-hooks are one of the top concerns I’ve heard from users so far. 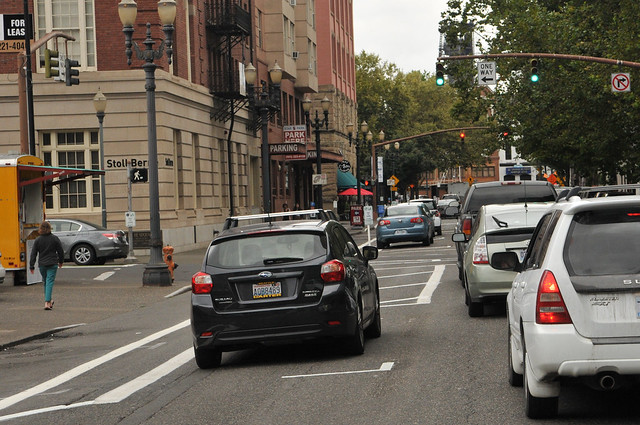 Here’s what we see while driving. 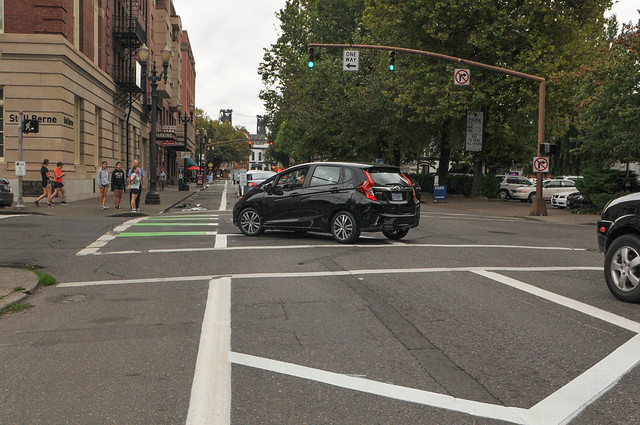 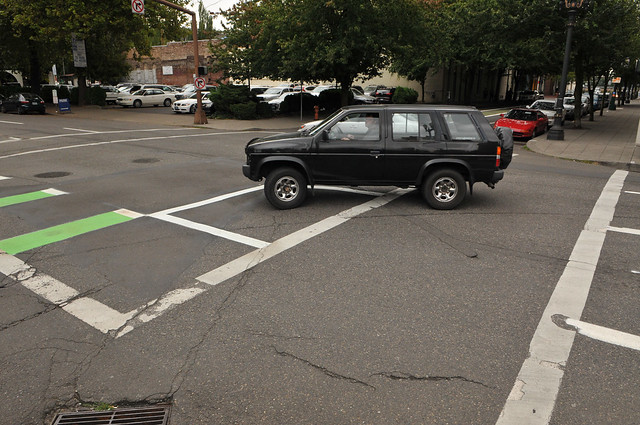 Most people cut these corners too close in order to retain their speed. The good news is that PBOT says that concrete diverters are coming soon in these locations.

So far this new bike lane has drawn mixed reviews. I’ve talked to several bike messengers who really hate it. They happen to hang out every day at coffeeshops and bars on 2nd and 3rd so they ride these streets often. They’ve told me they don’t like being forced into a bike lane and they fear people won’t watch for left-hooks. Others are criticizing PBOT for not going far enough: They want full signalization and better physical separation.