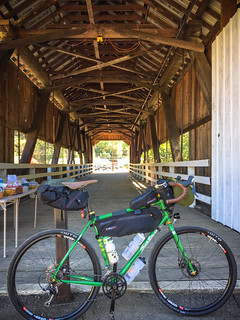 This small, once-mighty timber town sits on the banks of the South Umpqua River about 200 miles down I-5 from Portland. The official city motto is, “Where nature is your neighbor” and its most famous resident is none other than United States Senator Jeff Merkley.

I’m here to begin a four-day adventure that will give me an up-close look at the people and places that exist along the route of the Cycle Oregon Week Ride that’s coming up next month. Just like I did last year with my Five Days in Eastern Oregon series, this ride is part of a partnership with Cycle Oregon to help tell stories from the rural communities and great backroads that dot our fine state.

Last night in Myrtle Creek I met some fine people at the local Elks Lodge. They helped me understand the deep roots of the timber industry and regaled me with stories about how things used to be.

My favorite one was told to me by the manager (and bartender) of the Elks Lodge, Linda Johnson. 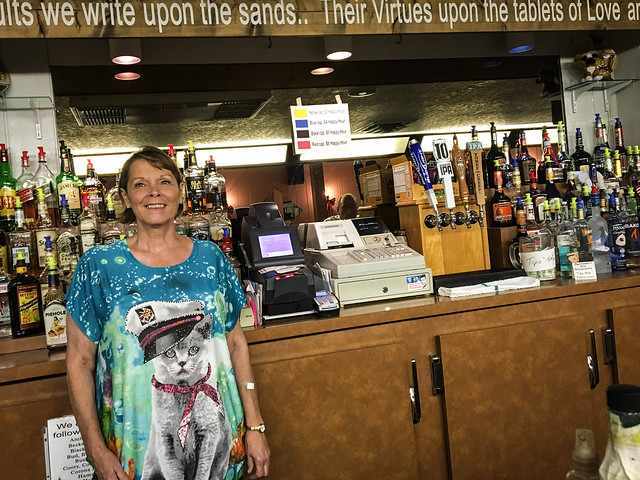 “We have a lot of wild turkeys here,” she said, as her sequin cat shirt sparkled, “In the ’80s people used to put coats on them and weart a matching shirt like a horse jockey.” This happened for about two years, until animal rights activists got wind of it and shut it down. “After that,” Johnson continued, laughing, “They just started rolling frozen turkeys down the road.” 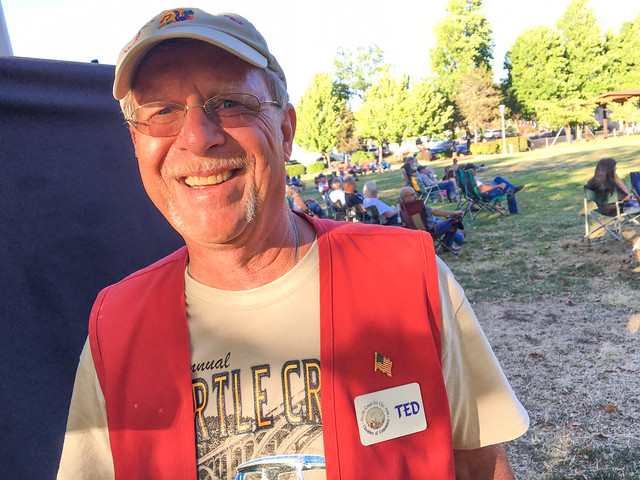 Ted Romas with the chamber of commerce.

My host was Ted Romas, secretary of the Myrtle Creek-Tri City Area Chamber of Commerce. Romas, a relative newcomer who retired here after buying a house on a whim after stopping at the Dairy Queen on a trip to Eugene with his wife in 1989, was kind enough to sign me into the Elks Lodge.

It was Thirsty Thursday and beers were just $1.50 a pint. Membership has it privileges. 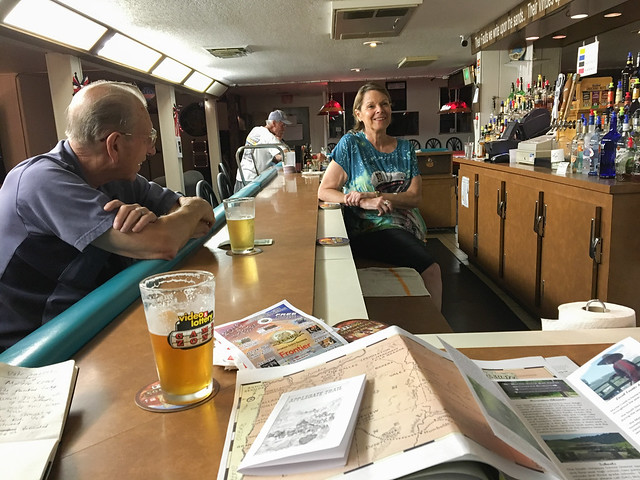 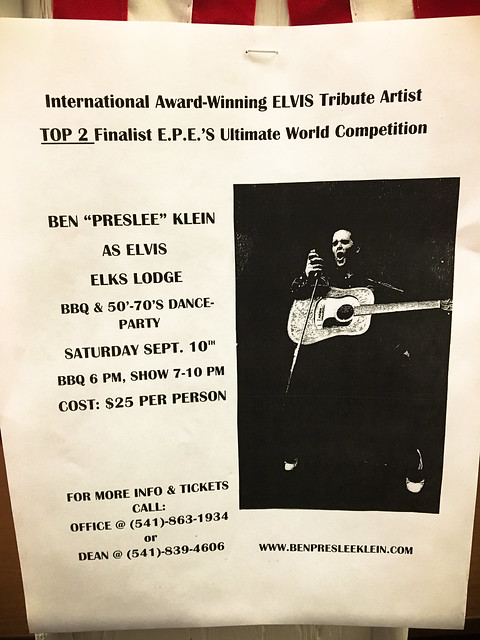 A flyer for an Elvis impersonator concert on the wall in the Elks Lodge. If you’re doing Cycle Oregon next month, make sure this is on your calendar.

The Lodge is adjacent to Millsite Park in the center of town right off main street. The Lodge occupies the building that used to be the sawmill offices. And, as the park’s name suggests, it used to be a bustling mill where saws ran day-and-night and a series of “log ponds” stored timber. 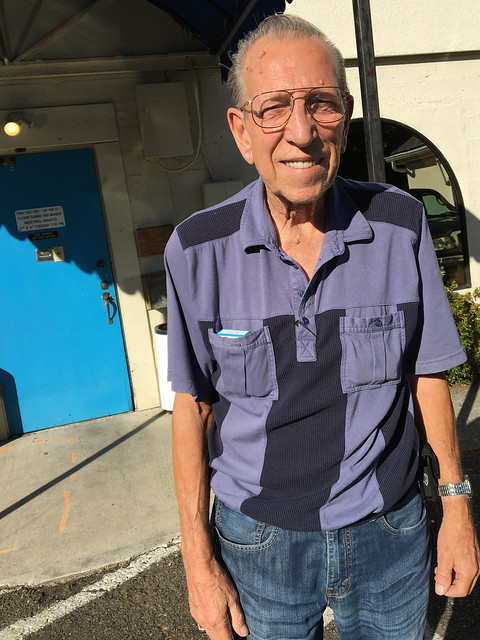 Across from me at the the bar sat Tracy McClendon. Now 78 and retired after 43 years as a mechanic for Roseburg Forest Products, McClendon grew up in nearby Weston (population 650). He started at the mill right after high school and an eight-year stint in the army. McClendon is now an active member of the Elks and he was proud to share all the ways they volunteer to help the community.

Then Steve and Donnie sidled up to the bar. The too spent most of their lives working in the mills.

When you pass by small towns like this on I-5 at 60 miles per hour it can seem like they’ve been forgotten. Or that they stopped moving when the logs did. While things are certainly quieter these days, Myrtle Creek seems to be slowly but surely finding a new identity. One that’s rooted in the long-cherished rural lifestyle and one that celebrates the characters who live here — and welcomes those who don’t.

From the gold rush of the 1850s, to the prune boom and timber economy that sustained them a century later, the people here always have something up their sleeve. Developing natural assets that can bring in visitors is one of them. 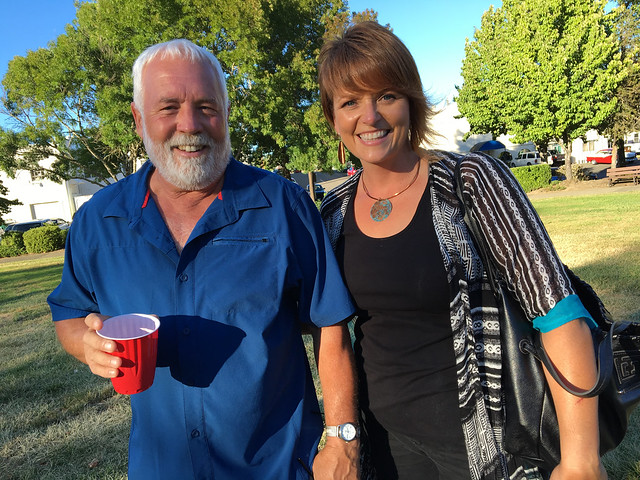 Misty Ross is editor of the Oregon Valley Verve, the new “Lifestyle and travel magazine of the Umpqua Valley.” It’s a richly-printed glossy magazine that showcases Douglas County and environs. Ross, a dedicated bike rider who also works as a barber, shared that her new magazine was inspired by an urge to highlight the great things about this area — especially after the mass shooting last year at Umpqua Community College in Roseburg.

“We’ve got 24 wineries and 12 breweries, and world-class fishing,” Ross said, hoping that good news will lighten dark memories and help the region regain confidence and pride. If Cycle Oregon and local organizations like Cycle Umpqua have anything to do with it, bicycles will be a big part of that good news too.

That’s it for now. I’ve got to get on the saddle and start this journey.

My route will take me west to the coast via Bandon, then south to Gold Beach, and then back east through the Siskiyou Forest to Grants Pass. Stay tuned for more dispatches from the road. You can follow the stories here or on Twitter @BikePortland.

Special thanks to Cycle Oregon and Western Bikeworks for supporting this trip.

The post Cycle Exploregon: Off the beaten path of the 2016 ride appeared first on BikePortland.org.