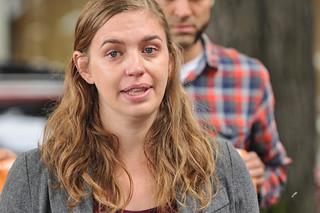 Oregon Walks Executive Director Noel Mickelberry pushed back tears as she said the recent spate of deaths and injuries have been “debilitating” for her organization.
(Photos: J. Maus/BikePortland)

No matter what Portland does to address the fatalities and injuries on our roads, in the end safety comes down to one major factor: personal behavior. That was the predominant opinion of the speakers at a rally “To end unsafe streets” held in downtown Portland this morning.

The event was organized by the Bicycle Transportation Alliance (soon to be called the Street Trust). That organization’s Executive Director Rob Sadowsky reminded the few dozen people and handful of media crews that showed up that Portland has had 30 road deaths so far this year. An “enormous amount,” he said.

Sadowsky shared the story of his young stepdaughter Catania, who walks and bikes in Portland. “When I drive, I drive as though every intersection has Catania on it. I’m asking all of you to watch out for Catania.”

Susan Kubota with Oregon and SW Washington Families for Safe Streets said she is “Extremely frustrated” over the recent spate of collisions. Kubota’s niece Tracey Sparling was killed in 2007 while biking in Portland. Tracey would have been 28 years old today. 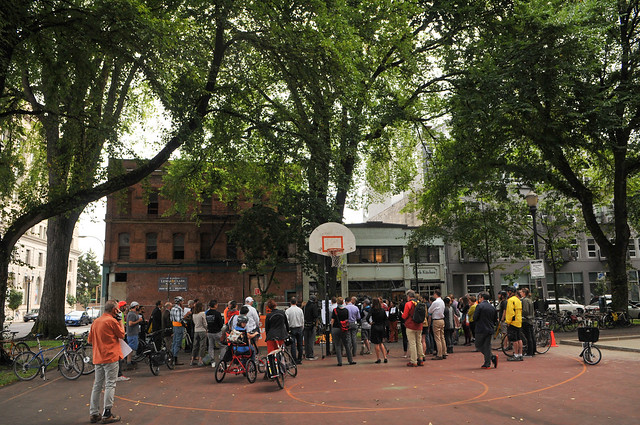 A few dozen people turned out for the event, which was held in the North Park Blocks. 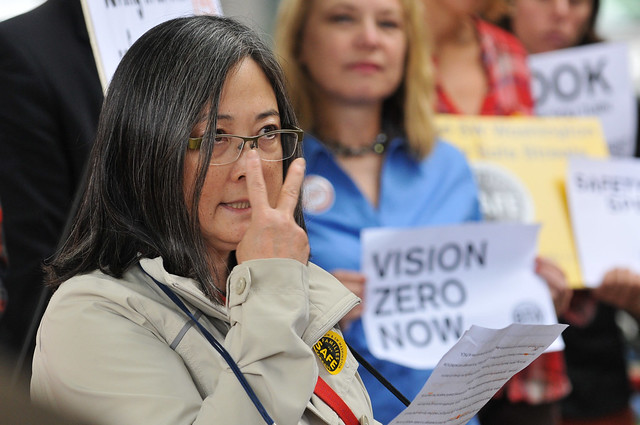 Susan Kubota who lost her niece Tracey Sparling in a 2007 collision, urged drivers to see better. 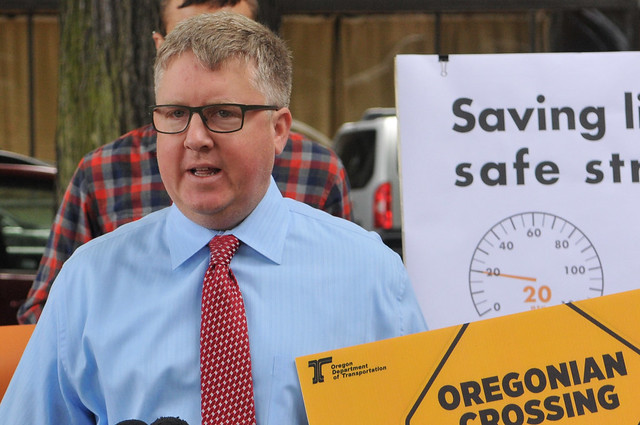 Kubota said we’ve become desensitized to street violence and that, “We forget what dangerous tools our vehicles are” and that when used improperly, cars become, “Extremely powerful weapons that need to be controlled.”

The Executive Director of Oregon Walks, Noel Mickelberry pushed back tears as she read the names of people who have been recently killed or injured. “I say their names as a reminder of the humanity behind these crashes.” Mickelberry said that Columbia Boulevard, the road where Bradley Fortner was hit and nearly killed earlier this week, needs to be redesigned because, “It’s not made for people.”

Steve Novick is the Portland city commissioner in charge of the transportation bureau. He told the crowd that the city is grieving over the recent incidents and that they are working hard to prevent more collisions. “We have not been idle,” he said. “And I know that might be hard to believe. We are trying.”

Novick listed several measures the city has taken including: a new unmanned speed camera that just went up on Beaverton-Hillsdale Highway, the road diet coming to SE Foster Rd, a recent speed limit reduction from 35 to 30 on Burnside, and the city’s efforts to wrest speed limit authority from the state.

While Novick said they are trying to stem the tide of unsafe streets, he too mentioned the need for personal responsibility. “We need people to change their behavior.” When he hears Portlanders complain about increased delays on roads due to lane reconfigurations, Novick said his response is, “Consider that extra three minutes in rush-hour as an investment in the children who go to school along the street.”

There was a noticeable shift from advocacy and government leaders at this rally toward placing the blame on road user behaviors and away from our urgent need to redesign roads and have stronger policies. While everyone knows we need to approach road safety on many fronts, a tendency to focus on individual actions ignores the powerful role that the built environment — and the system in general — can play.