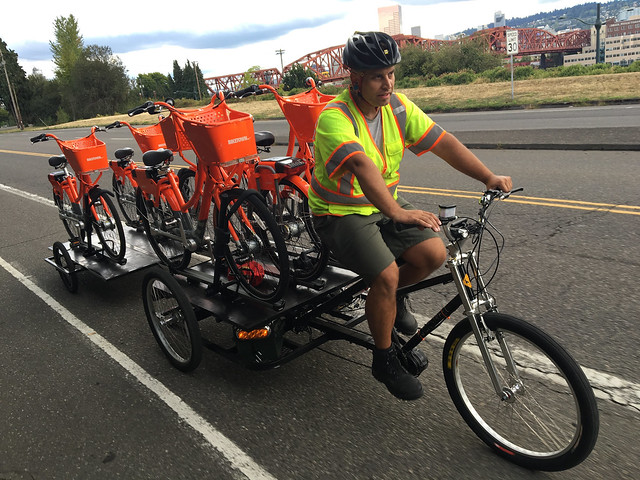 Motivate employee Troy Leighton on the inaugural ride of the new cargo trikes being used to rebalance Biketown bikes.

Yesterday we scored a sneak peek at a new program that the City of Portland and Motivate (the city’s bike share operator) is working on: A small fleet of pedal-powered trikes that will help make sure Biketown stations have enough bikes available to potential users. In the bike share world this task is called rebalancing.

As bikes get used and left around town, some popular stations tend to run out of bikes. It’s a tricky issue for all bike share systems, and a costly one. Rebalancing is the single largest operational expense for bike share systems. Operators of Washington D.C.’s Capital Bikeshare spend about 55 percent of their operating costs on rebalancing efforts which includes the wages of 20 van drivers and four dispatchers (we rode along with one in 2013). 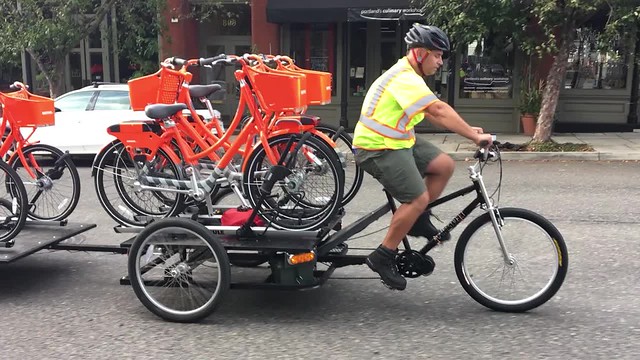 But Portland’s system is different. Our “smart bikes” have on-board technology and don’t have to be parked at a Biketown station. This takes pressure off the operator to make sure stations have spaces to return bikes and bikes to use.

Instead of relying on costly vans and a dispatch system, Biketown is using real-time GPS data and financial incentives (users can get a $1-2 account credit for returning bikes to stations, see tweet below) to keep the system balanced. Now they’ve added a few cargo bikes with trailers to that effort.

As we reported last year, the Portland Bureau of Transportation’s bike share program manager thinks our system’s flexible parking feature will elimate half of the rebalancing costs. The city wants to keep the system balanced in order to get more customers. And the system operator Motivate is required by their contract with the City of Portland to “increase the probability” that stations never sit empty and to have no fewer than 10 percent of the 1,000 bikes in the system in each quadrant of the city at any given time.

Yesterday was the first time their new trike hit the streets. According to a PBOT spokesperson what we saw was part of a test and the full program is ready for prime-time just yet.

Here’s what we do know about the trikes so far:

– Biketown will use them for rebalancing and to respond to bike service and repair requests.
– They will complement vans already in use.
– The one we saw yesterday was made by Main Street Pedicabs, a Denver-based company.
– They have electric assist and can pull two trailers and up to six fully-assembled Biketown bikes (compare that to a van which can hold about 15-20 bikes).
– The trike and trailer has a cool, working turn signal!

One question looming among insiders is whether or not we’ll see the Portland-made “Truck Trike” used by Biketown. This cargo trike is made by southeast Portland based Stites Design and has already been shipped to New York City for use in its Citibike program.

We’ve reached out to Stites Design and PBOT to ask about the Truck Trike and will update this post when/if we hear back.

UPDATE, 11:20 am: We’ve heard back from Bill Stites of Stites Design. He confirmed that he wasn’t asked to bid on the contract. According to Stites, his Truck Trikes are heavier duty than what’s required for Biketown. The Stites trike can canb carry 600+ lbs. of cargo plus 200 lbs. of driver. This capacity is way more than what’s needed for Biketown and as a result the price of Truck Trikes is more than Motivate needed to spend. For Biketown, Motivate decided to go with a smaller capacity trike from Main Street (which Citibikes in NYC is using too). Stitles says he’s glad to see the city using trikes, “even if they aren’t Portland made.”