A seasonal fix to Naito Parkway isn’t the only thing on the bureau of transportation’s fall budget wish list. With a total of $8 million in General Fund dollars up for grabs, PBOT is lobbying for several other exciting projects.

Three projects caught our eyes in PBOT’s official Fall Budget Monitoring process request (PDF here). Scroll down for details on each one of them… 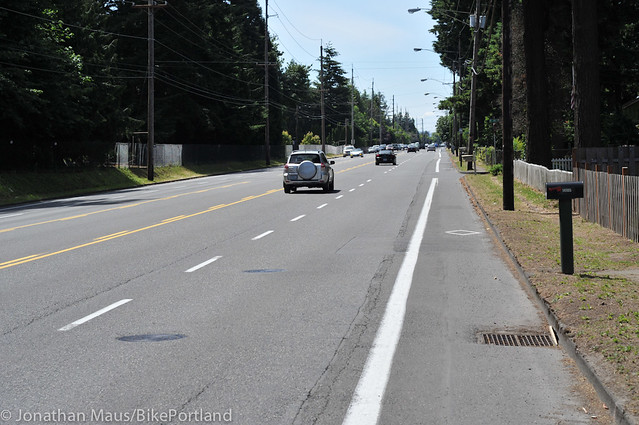 In what appears to be the largest infrastructure project ever requested by PBOT under the banner of their commitment to Vision Zero, the agency wants $2.9 million for Halsey Boulevard. The project would redesign the streetscape from 122nd (a designated high crash corridor) east to 162nd (near the Gresham border). Between 2005 and 2014 there have been 18 reported serious injury crashes and one fatality on this two-mile stretch of road. Much more funding is needed to accomplish everything PBOT would like to do here, but this $2.9 million would be a good down payment.

Specifically, the project calls for filling sidewalk gaps, narrowing existing vehicle lanes to make room for buffered bike lanes, improved crossings and a reduction of the posted speed limit from 45 mph to 35. Furthering their commitment to Vision Zero, PBOT also wants to bolster their ability to communicate with the public around safety. They want funding for three new projects: $200,000 for targeted outreach around drunk driving; $200,000 for a Safe Routes to School traffic safety program in local high schools, and $500,000 to build small projects that are flagged through the city’s 823-SAFE citizen complaint line.

With 62% of all Portland fatalities involving intoxication, PBOT wants to start a Safe and Sober Streets program focused on downtown Portland. The effort will, “provide people with free rides and the option to pre-pay for Saturday morning parking. Downtown is the focus because Oregon Liquor Control Commission data shows that area has a high concentration of bars and restaurants that overserve.

A new program to target teenage drivers in high schools would include: safe driving advertisements that reach young people through Facebook, Pandora, and other web-based media; and working with student leaders to promote safety in schools through competitions, events and other promotions. A traffic safety pep rally perhaps?

We’ve covered the 823-SAFE hotline many times over the years. It’s an excellent way to communicate with PBOT and flag safety hotspots. The city says there are over 1,000 pending requests in the system right now and with the $500,000 they’d bew able to, “prioritize those community requests based on PBOT’s safety data analysis for Vision Zero.” And better yet, once projects were green-lighted they could actually be built. 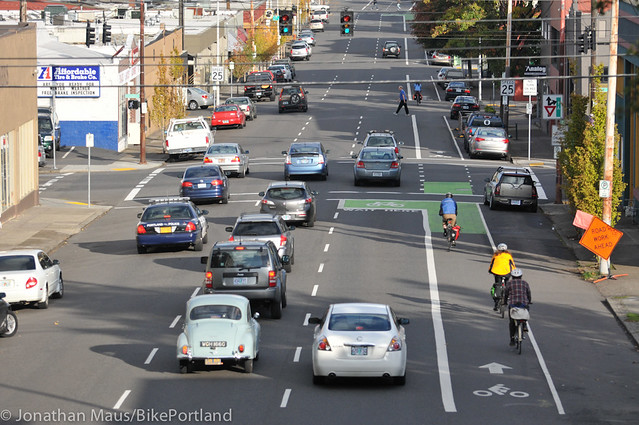 As first reported in The Oregonian yesterday, this project would allow PBOT to update the design of Hawthorne to meet today’s demands. Specifically the project would build a separated bikeway, bus transit improvements that would allow drivers to jump the signal queue and access stops via islands. Island bus stops are preferred over curbside stops because they help avoid the bike/bus leapfrogging that plagues many of Portland’s busy streets. Another important piece of this project would be traffic signal improvements on the entire corridor from the Hawthorne Bridge to Ladd Ave. Signals can help distribute traffic and separate modes so that there are fewer drivers tempted to make right turns in front of others.

PBOT makes the case for these upgrades by pointing out that this section of Hawthorne between SE Grand and Ladd avenues is “an important bikeway and transit corridor between the region’s economic hub (downtown) and the highest bicycle and transit use residential areas of SE Portland.” Hawthorne carries over 7,000 daily bike and transit trips. When those mix with ever-increasing amounts of auto traffic, it creates a stressful environment. PBOT calls this area “one of the city’s highest bicycle crash corridors,” with 55 reported bike crashes between 2004 and 2013.

Interestingly, PBOT has also set aside $500,000 in this project to add a traffic signal to the ramp from northbound Naito that feeds onto the Hawthorne Bridge. “A signal here would reduce vehicle delay at this location and create more regular, predictable and less stressful vehicle traffic flow for automobile traffic accessing the Hawthorne Bridge,” PBOT writes in the project description. This location also happens to be the personal crusade of local citizen activist Josh Chernoff. For weeks now he’s been posted near-daily photos and videos of people who illegally place their cars on the crosswalk that acts as the entrance onto the bridge path for bicycle riders and walkers. His latest video (below) illustrates how broken this intersection is and why i needs to be fixed: The new path between Sellwood and Milwaukie is almost done!

By the end of next month the City of Milwaukie will have finished building a key segment of the Trolley Trail — a separated path that runs from the Sellwood neighborhood to downtown Milwaukie on 17th Avenue. That’s great news by itself, but unfortunately the terminus of this new path will stop tantalizingly short of the start of the legendary Springwater Corridor path (see map). Thankfully PBOT is on the case. With this project they’d widen the trail and the western sidewalk of 17th between St. Andrews Drive (end of Trolley Trail) and SE Linn Street where there’s a new median refuge island crossing treatment. People could then connect to the Springwater via Linn. While competition for city general fund dollars is fierce and PBOT isn’t likely to get all this stuff funded, it’s good to see that they’ve got these projects shovel-ready. There are other funding opportunities on the horizon.