The Cycling Against Hate ride, planned in response to an ugly pepper-spraying incident in northeast Portland last week, happened on Sunday. BikePortland correspondent Ted Timmons was there and shares the following recap… 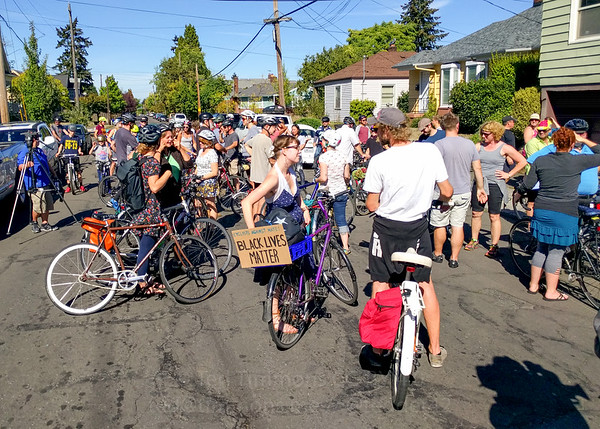 About 90 riders showed up; including familiar faces like former mayoral candidate Sarah Iannarone, Community Cycling Center CEO Mychal Tetteh and author, publisher, and activist Elly Blue. Organizer Taz Loomans had a family emergency to attend to so Elly stepped in to lead it.

We started with a moment of silence, then community members and leaders spoke.

"Share some of the reasons that you showed up today with someone that you don't know." #cyclingagainsthate

And we are off! #cyclingagainsthate

"It means a lot to have this many people come out and care." #cyclingagainsthate

After being introduced by Mychal Tetteh of Community Cycling Center, Sarah Iannarone spoke, challenging us to become a more inclusive city and especially a more includive bike community. “Get educated, further educated. Please, read a book, talk to your colleagues”. Here’s video of her speech:

Longtime friend of the family Wendy Williams also spoke about how this hate crime has impacted the children, then thanked the bike community for showing up to support the family.

A few local news crews, who kept a low profile, were there: KATU, KGW, KPTV.

It was nice that they didn’t overwhelm the event, but tried to quietly report on it.