Seattle-area activists were key in pushing for this change.
(Photo: Seattle Neighborhood Greenways)

Seattle transportation reform advocates are celebrating a major milestone this morning: last night Seattle City Council unanimously approved a measure that sets a default speed limit on some central city arterials of 25 miles per hour (instead of 30) and 20 miles per hour on all residential streets (instead of 25).

This is a big deal. Joshua Cohen reports on Next City that the new policy will effect a whopping 2,400 miles of neighborhood streets.

Portland’s biggest speed limit victory came in 2011 (and the 20 mph signs went up two years later) when the City and advocates successfully lobbied Salem legislators to pass a bill that gave the transportation bureau the authority to lower the speed limit five miles per hour (from 25 to 20) — but it only applies to streets designated as “neighborhood greenways”.

It passed! Seattle speed limits will be reduced to 20/25 mph. Thank you @sallybagshaw. Thank you @SNGreenways. Thank you @CascadeBicycle. pic.twitter.com/8oi6Kche2H

Sources in Seatte say their new policy came about for two key reasons: A change in state law in 2013 that made it easier for the city to set speed limits and advocacy groups who pushed city council to live up to their Vision Zero rhetoric. 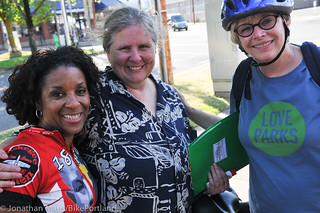 Seattle Bike Blog editor Tom Fucoloro told us via email last night that, “Originally, the city wanted to go street-by-street in implementing it, but they changed their tune in recent months after urging by Seattle Neighborhood Greenways.”

The nonprofit Seattle Neighborhood Greenways (with the help of other groups and Cascade Bicycle Club) worked for years on a “20 is plenty” campaign. SNG Executive Directory Cathy Tuttle told Next City that the law is a “giant step forward.”

Fucoloro was also quick to point out that lower speed limits “aren’t worth much” without street designs that force people to drive more slowly.

Interestingly, he also said last night’s unanimous council vote was long overdue given that a state law passed in 2013 all but paved the way. That law, dubbed the Neighborhood Safe Streets Bill, relieved municipalities of the burden of costly and time-consuming traffic studies previously required to earn a speed limit reduction from the state.

If that sounds familiar, you’ve been paying attention.

Cities and towns in Oregon must also go through an onerous process to request a speed limit reduction (on a case-by-base basis) from the State of Oregon. Similar to what Washington did in 2013, the City of Portland is trying to do now. As we reported last month our bureau of transportation has asked ODOT to sign off on an alternate methodology for setting speed limits.

PBOT spokesman John Brady told us this morning that PBOT traffic engineers recently met with ODOT and cleared up all the remaining issues and that, “We expect to receive the formal go-ahead soon.” Once the new methodology is in place, PBOT will be able to use it for a four-year period.

While far from a silver bullet given the state of enforcement limitations and auto-centric road designs; the power of passing lower speed limit policies is in what they do to traffic culture: They send a signal to road users about what type of behavior is acceptable and expected.

In a society where deviant and extreme driving behaviors are mainstream, safe driving messages — and policies to back them up — are essential ingredients for change.

The post Seattle just passed a citywide 20 mph speed limit, and Portland could be next appeared first on BikePortland.org.