If we ever want bicycling to become mainstream, we must find a way to educate more people on the right way to ride in traffic. It can be tough though, because our streets make most people so stressed out that they adopt bad habits just to stay alive.

That’s where a traffic garden can come in: A place that mimics real-life street conditions and that’s out of harms way. These facilities have been used in northern Europe for many years (we reported on one in Utrecht in 2009); but the United States hasn’t fully adopted the concept.

On Saturday in Seattle the Cascade Bicycle Club and their partners celebrated the opening of the White Center Bike Playground at a park about eight miles south of downtown. The project replaced two unused tennis courts and turned them into a smartly designed streetscape complete with crosswalks, multi-lane roads, a roundabout, and more. The idea was to create a place where kids and adults can practice safe riding skills in a realistic environment away from the dangers posed by other road users. 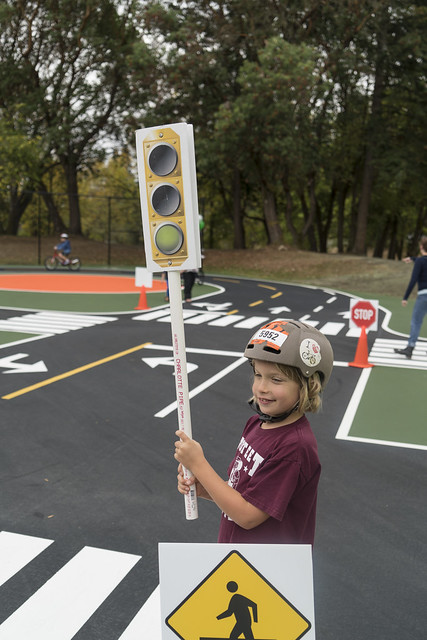 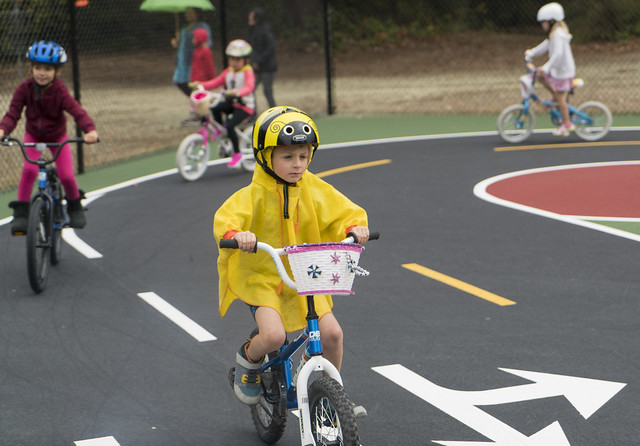 The design and the idea came from former Portland resident and currently Seattle-based urban planner Steve Durrant. Durrant is a senior landscape architect with Alta Planning + Design who approached Cascade with the idea of a traffic garden nearly two years ago after seeing one in Copenhagen. They built their first one last spring in an alley outside Cascade’s headquarters in Magnuson Park. The new “Bike Playground” in White Center is much larger and has more features.

Durrant said he created the design with the inspiration from Copenhagen along with the needs of the League of American Bicyclists’ League Cycling Instructor program. He says the facility isn’t intended solely for kids and he expects it to be used by adults who are new to biking as well. “Instead of using chalk and cones and saying, ‘Hey kids, imagine this is a bike lane,’ we ended up painting actual lanes.”

In a telephone interview today Durrant said he tried to include many different traffic scenarios in the space: stop lines, crosswalks, lane merging, a roundabout, a one-way loop, and so on. In addition to the streetscape elements, the space has a shipping container for storing bikes and a cement pad for bike racks and tables for people to relax and watch the action.

The Bicycle Playground is open to the public and will be used in Cascade’s educational programs — especially their Major Taylor program which teaches young people from underserved neighborhoods how to become confident bicycle riders.

The project was funded in part with a $50,000 grant from King County Parks and private donations. Total project cost was just under $95,000.

Now the question is: Where should we put one in Portland?

The post Seattle’s new traffic garden is the perfect place to learn the rules of the road appeared first on BikePortland.org.