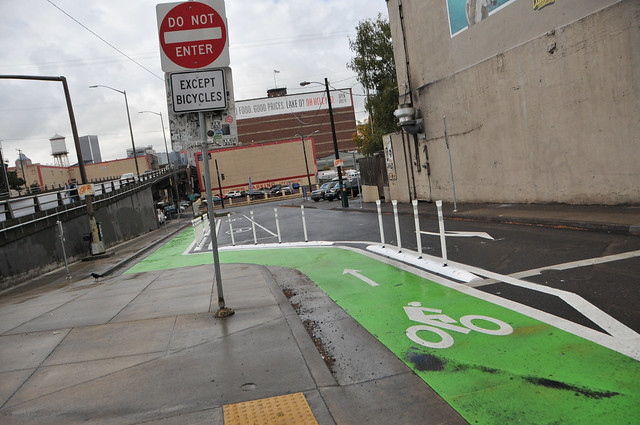 New one-block section of contraflow protected bike lane on SE Morrison Street between Grand and MLK is one of several new projects PBOT has installed in the past few months.
(Photos: J. Maus/BikePortland)

The merry little elves at the Portland Bureau of Transportation have been busy over the past several months. If you like to bike in the city and are waiting for major projects to be completed (like the 20s Bikeway, the bike lanes on Foster, the protected bikeway network downtown, and so on) you’ll still have to wait. But while those projects are still in the workshop, the elves have pushed out lots of smaller ones.

Scroll down for notes and photos on the projects…

North Interstate Avenue between Tillamook and the Broadway Bridge ramp 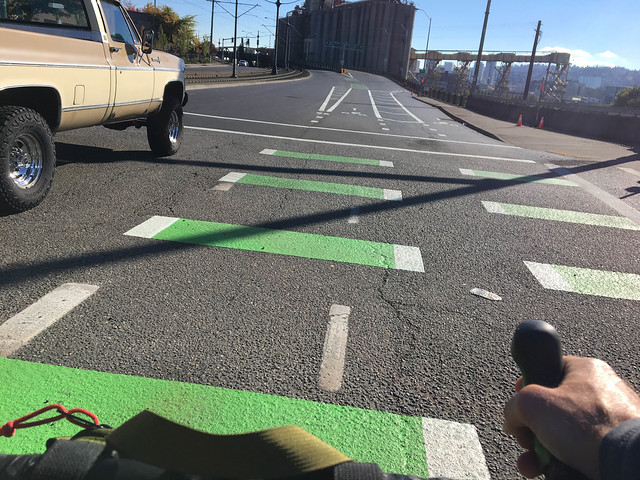 An improvement to the bikeway at this location has been officially pondered by PBOT for nearly a year. As we reported last November, Portland Bicycle Coordinator Roger Geller said the southbound bikeway on Interstate at Tillamook is configuration is “troubling” because, as a bicycle rider “you’re basically in between large and fast vehicles.” Geller presented three striping options that aimed to fix this issue and they decided to go with a variation of Option C. Here’s how we described this option last November:

This option gives bicycle riders the priority throughout; but it doesn’t provide the safety buffer of the other two options. Also, bicycle riders continuing on Interstate will still have 175-feet of exposure to merging traffic. (If you’re wondering why PBOT designed such a large merge opening over to Larrabee, it’s because this is a freight route and their design standards require 175-feet for large trucks to make the turn.)

Reader and dedicated neighborhood transportation activist Ted Buehler commented over the weekend that he thinks the new striping is an improvement. However he added that, “It could probably use some sort of protection to keep cars from driving through it. I watched about 20 cars tonight, and only about 3 blatantly drove through it. And they were all going slower than they used to go with the old paint.” In the end, Buehler feels it’s “still a potentially dangerous place to be on a bike.”

When I rode through it the other day someone in a big truck roared up behind me and swerved (seemingly on purpose) over just before the Broadway Bridge ramp. Here are a few more photos: 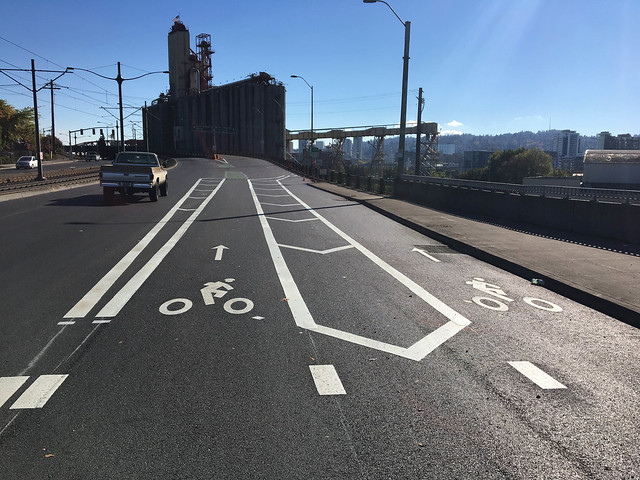 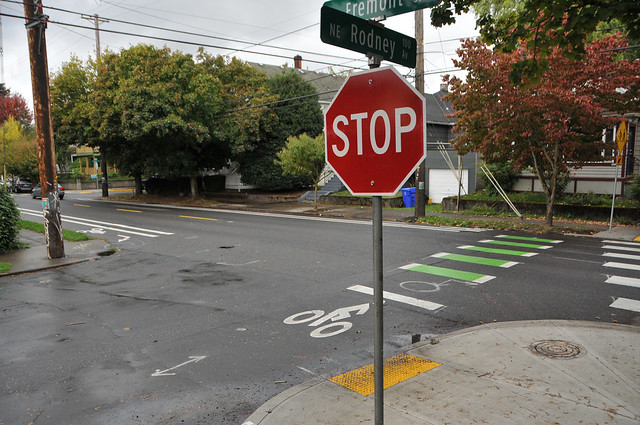 Looking northwest from Rodney at Fremont.

This project is part of the North Rodney neighborhood greenway. The crossing of Fremont is off-set and because it’s a higher volume street without much space in the shoulder, the crossing has always been a bit stressful. To help ease the pain for bicycle users, PBOT has added two crossbikes and buffered bike lanes on Fremont. The new striping definitely helps give an added perception of comfort and slows people down a bit. Here’s how it looks: 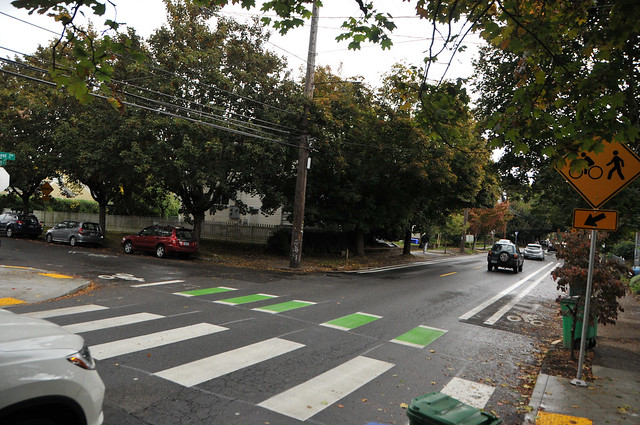 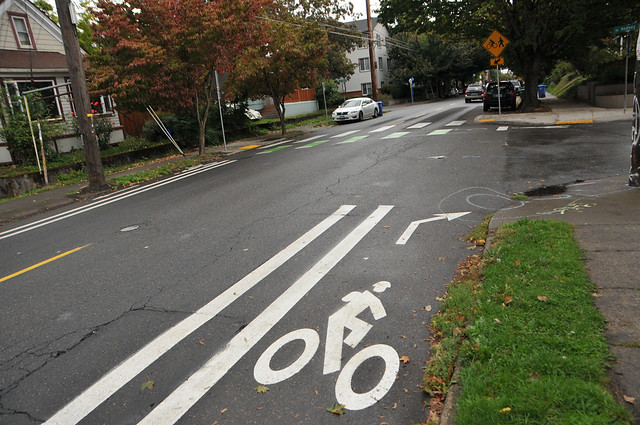 North Vancouver between Fremont and Cook 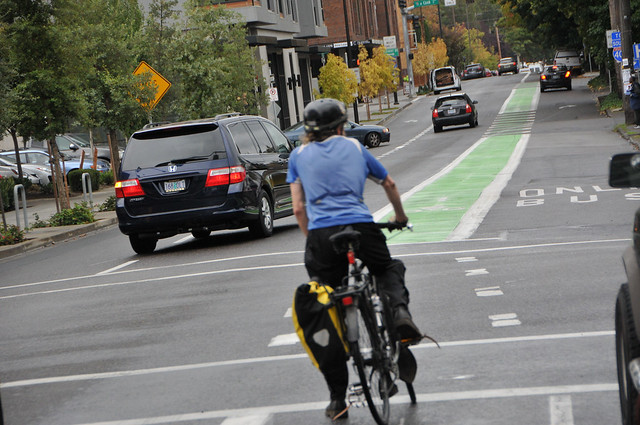 Looking south on Vancouver toward Cook.

Vancouver is a main artery for people bicycling from north Portland into downtown and other points south. With lots of growth in the corridor (N Williams Ave is its couplet one block east), traffic volumes are increasing in the bike lanes and the standard vehicle lanes. The stretch between Fremont and Cook has always been especially hair-raising. There’s a freeway on-ramp at Cook that encouraged a lot of people in cars to have to swerve across a busy bike lane and there wasn’t much in the way of bike-specific infrastructure. It was a daily dance that always made me cringe.

To help improve the situation and add some predictability, PBOT has added solid green coloring to the bike lane. They’ve zebra-striped the green coloring at a point just before Cook to encourage people in cars to crossover at that point. It seems to be working a bit better, but there’s still no physical protection for bicycle riders and you still have to bike between large motor vehicles. It would have been better to create a protected bike lane curbside and then give bicycles a queue jump to Cook where there’s a new signal. 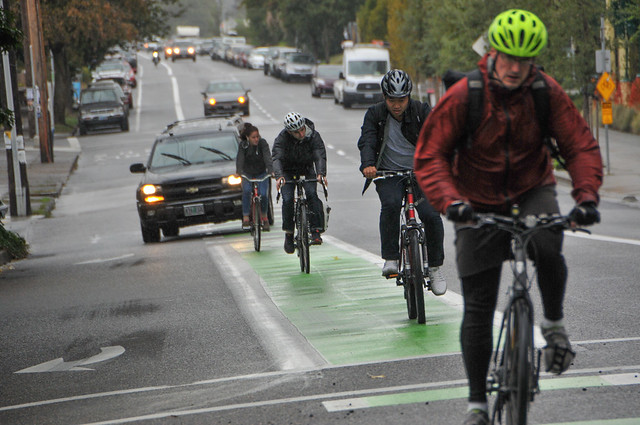 Looking north on Vancouver from Cook. 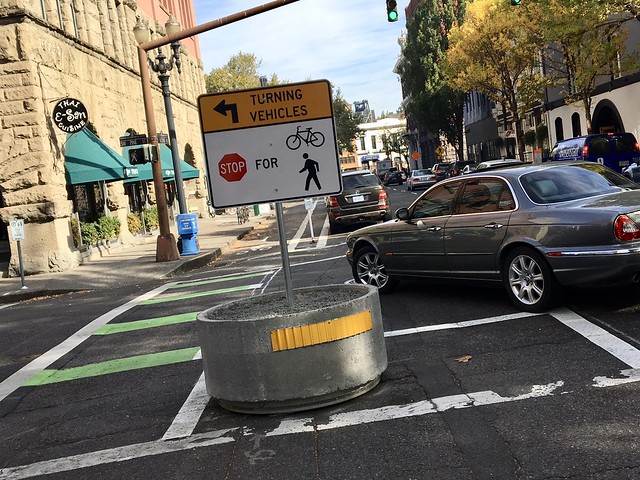 PBOT has added cement barrels with a big caution sign in the middle along the length of their new protected bike lane on 2nd Avenue. When this new bike lane opened two months ago we noted that people in cars would short-cut left turns. This was a concern because the way PBOT designed the bike lane with a floating auto-parking lane, visibility isn’t as good as it should be and these left-turns were a hazard. Now with the cement barriers, people must make sharper left-turns which means they will slow down and hopefully be more aware of people in the bike lane. The new barriers also add an element of refuge for people crossing the street on foot.

SE Morrison between Grand and MLK 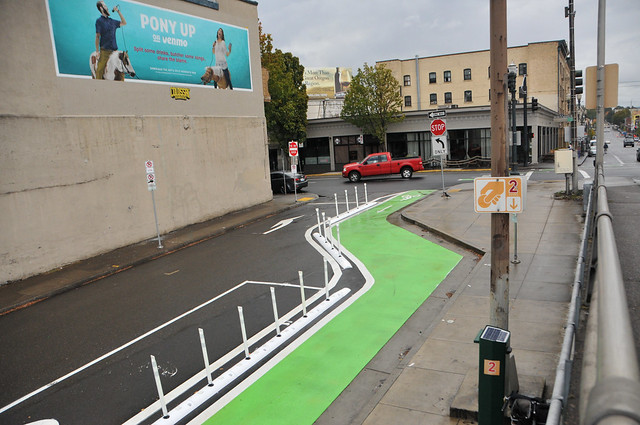 To help get people on bikes from inner southeast, through the central eastside industrial area and up onto the protected path on the Morrison Bridge, PBOT has squeezed in a short stretch of physically protected bike lane (we first reported about this here). When facing west on Morrison, you can follow green zebra-striping breadcrumbs to find the new contraflow bike lane (adjacent to River City Bicycles parking lot!). The bike lane leads you onto the sidewalk where there’s a signal to cross Martin Luther King Jr. Blvd. PBOT has then completed the route by installing sharrows on SE Morrison Street under the bridge viaduct. 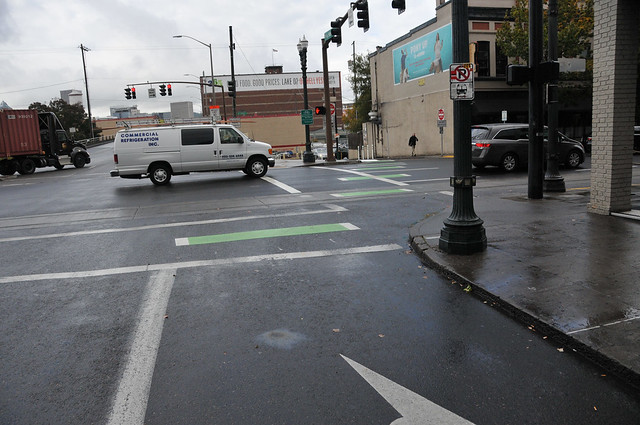 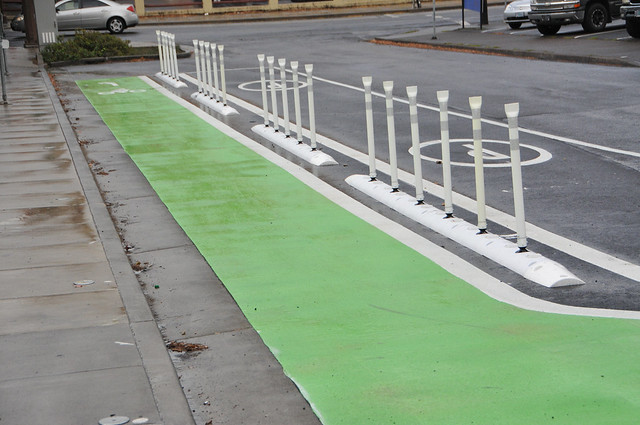 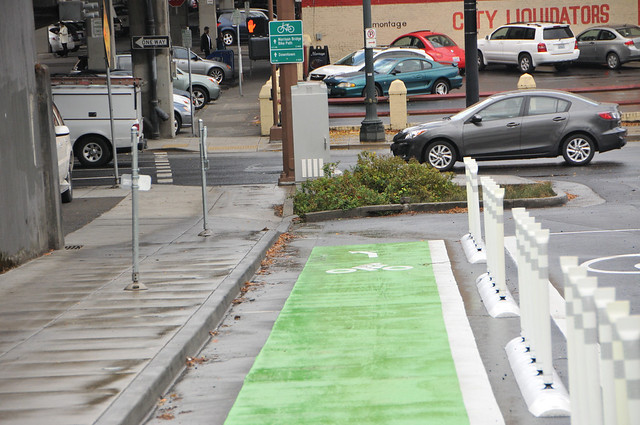 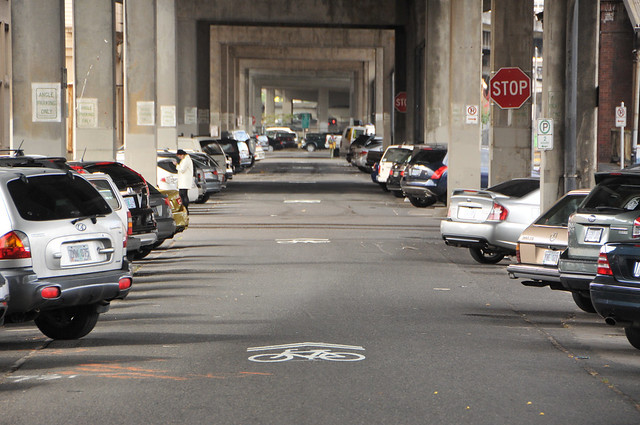 It’s always nice to come across these new sections of bicycle access upgrades.

Have you ridden on any of these? What has been your experience?