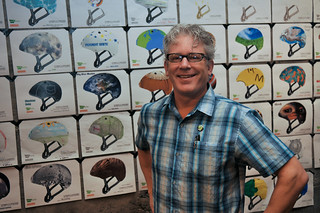 10 years after being founded by a former Nike employee, Portland-based Nutcase Inc. has been acquired by Bravo Sports Corporation.

The move brings Nutcase under an umbrella of 23 other brands owned and/or managed by Bravo Sports that includes well-known names in the skateboarding market like Kryptonics, Sector 9, Pro-Tec, and Vision Street Wear. Bravo also owns children’s scooter brand Pulse Performance Products, holds major licensing agreements with Marvel, Nickelodeon, Disney/Pixar (and others), and holds exclusive rights to license, manufacture, and market E-Z UP tents. Bravo Sports is backed by Transom Capital Group, a private equity firm based in Los Angeles.

Nutcase was founded in 2006 by Michael Morrow. Over the past decade the company has grown steadily and has become a leading helmet brand known for their focus on eye-catching designs. After establishing a strong foothold in the U.S. market, Nutcase made a big push into Europe in 2013 and now has distributors in over 40 countries worldwide. In February of this year the company hired its first-ever CEO and a few months ago Nutcase made the decision to drop their motorsports helmets to focus exclusively on bicycling helmets.

Nutcase helmets are currently sold by a network of 35 sales reps who oversee the brand’s 600 dealers nationwide. Nutcase will join 23 other brands in the Bravo portfolio.

“This acquisition allows us to continue to be at the forefront of the urban cycling revolution, while also providing our reps access to a robust network of authentic active lifestyle brands in the mountain biking and skate realm,” said Nutcase Marketing Manager Meghan Sinnott in an email to us this morning. “This is all incredibly exciting for us.”

In the press release announcing the acquisition Bravo Sports CEO Leonardo Pais said, “Protection is one of our key areas of growth… we are proud to be able to offer Nutcase as a bicycle helmet for riders of all ages worldwide.”

Nutcase Founder and President Michael Morrow said now is the perfect time to take Nutcase to the next level. “This merger will allow our product design, brand marketing, and sales organizations around the world to continue to innovate in the bicycle helmet market, with an emphasis on integrating creativity and technology to meet the safety needs and lifestyle aspirations of riders worldwide.”

Transom Capital says its approach to company management is a “value creation process” based on the acronym ARMOR which stands for: “Acquisition, Restructuring, Monitoring & Operations, and Return.” Transom says they provide operational support, “without overwhelming the management team.”

Nutcase’s 14 current employees work in an office on the second floor of the Ford Building at the corner of SE Division and 11th. Sinnott, the marketing manager, tells us, “Very few” positiosn will be elmintated and that, “Those whose jobs have become redundant are aware their positions will be changing in the next few months.”

Bravo says the company will remain in Portland.