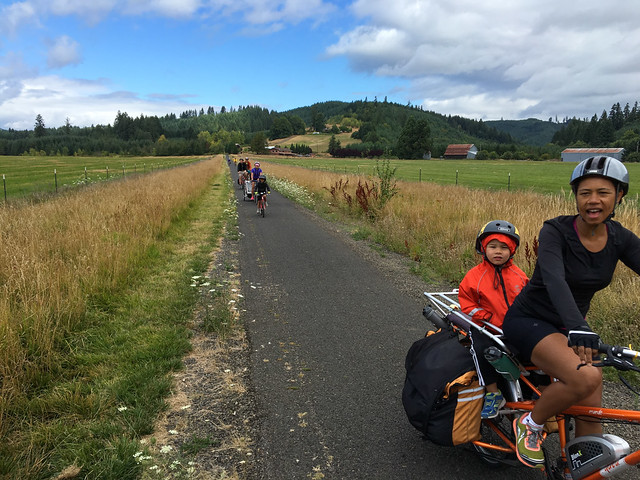 The Banks-Vernonia trail is one of Oregon’s riding gems. Would we have more trails like it with a new advocacy approach?
(Photos: J. Maus/BikePortland)

Community advocates and government agency staffers throughout Oregon are working hard to develop world-class trails. But is that work failing to reach its potential without a statewide trails advocacy organization? Stephanie Noll is researching an important question for bike tourism in Oregon.

Trail projects — many of them spurred by a demand for bicycle use — are being dreamed up, funded, and built all over Oregon right now. There’s tremendous momentum for all forms of cycling — from singletrack dirt trail riding that’s become popular at Sandy Ridge to rail-to-trail riding on paved paths like the Banks-Vernonia State Trail. Trails are the backbone of Oregon’s bike tourism engine that pumps $400 million a year into the state economy.

Despite all the projects and people that make up Oregon’s outdoor trail ecosystem, there’s no statewide group that can present a united front for lobbying, promotion, fundraising, and so on.

This problem has been identified by Travel Oregon and they’ve hired a consultant to look into it. At a meeting of their Bicycle Tourism Partnership meeting in Bend today, Stephanie Noll (former deputy director of the Bicycle Transportation Alliance, now a private consultant) shared insights from her ongoing research into the topic.

Noll has conducted 20 interviews with trails experts throughout Oregon where she posed the following question:

What hurdles does Oregon face in building and maintaining a world class network of trails, and how could we work together to address those hurdles?

The number one response was the need for a coordinated effort to get more funding (big surprise!). The other top feedback was a need to convene existing trail groups to learn from each other and creating a cohesive vision for a statewide trail network.

Noll also shared examples from Washington, where a much more evolved approach to trail advocacy exists. The Washington Trails Association was started 50 years ago, has 33 full-time staffers and 13,000 members (whose donations provide most of the funding). On the biking side of things, Washington’s Evergreen Mountain Bike Alliance has 25 staffers and chapters all over the state. There’s also the Washington State Trails Coalition that convenes a wide variety of groups including ATV users, boaters, and equestrian advocates. It’s an enviable ecosystem that feeds off the state’s dedicated Recreation & Conservation Office — Washington’s governmental arm that does the heavy-lifting of getting federal grants, among other things.

With this advocacy ecosystem, Washington seems far ahead of Oregon when it comes to trail planning and development. It could also be one explanation for the fact that Washington has 110 officially designated rail-trails and Oregon has only 20.

Oregon has a lot to be proud of when it comes to bike trail advocacy. Travel Oregon has been a stalwart supporter of the trails for over a decade as the founder of the Oregon Bicycle Tourism Partnership (which first met in 2004), creator of the Oregon Scenic Bikeways program, funder of the RideOregonRide.com website, and much more. But they’re a government entity beholden to many other (non-bike-related) priorities.

If Oregon wants to become the premiere state for cycling on off-highway trails, it might be time for a new entity to help tie all the existing threads together and weave a more beautiful tapestry of riding opportunities.