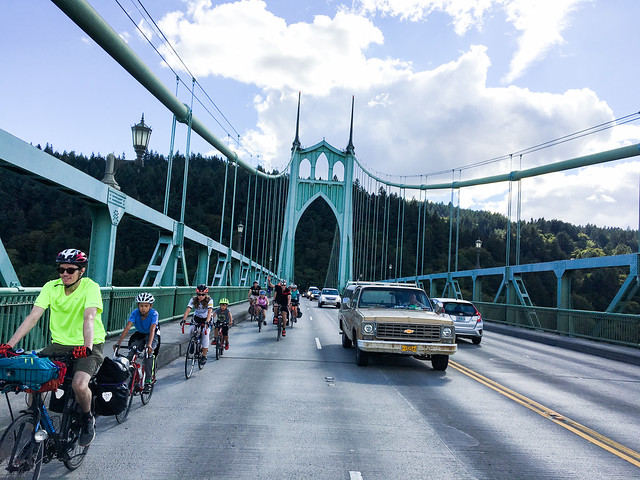 Bicycle riders are allowed to use the full lane on the St. Johns Bridge — a ride on Thursday will remind people of that fact.
(Photo: J. Maus/BikePortland)

Let’s show ODOT that we deserve to be protected and we are sick of this shit.
— From the Facebook event page

With the community reeling with sadness and anger about the death of Mitch York, a protest ride will happen on the St. Johns Bridge this Thursday.

York loved riding in the west hills and was en route to one of his many monthly rides when he was hit. The ride is being organized by Portlanders Jake Tong and Hazel Gross. Here’s the description via Facebook:

Fellow Cyclist Mitch York lost his life Saturday on the St.John’s Bridge while logging in his hundreds of miles on his bike as he did every week. His life was tragically ended by a negligent driver. He was the 37th person to die from a traffic collision this year. You, me, and every other cyclists we know uses the bridge as it’s a main route to the west hills, FP [Forest Park], and Sauvie’s. We as cyclist should not fear for our lives as a 5k pound of metal moving at speeds exceeding 35mph speed pass by us without the legal 3 feet. Let’s show ODOT that we deserve to be protected and we are sick of this shit.

Rumor has it People will Meet on Thursday the 3rd at 6 pm in Cathedral Park, 6:15PM ride up to the bridge where we will stop and take a break. HELMETS STRONGLY ENCOURAGED. Let’s illuminate the night with blinky lights. Bring signs, and whatever else you feel will let you be heard/seen.

Who will it be next? Your friend? Your child? Your Brother, sister, mother or father? Your significant other? You?

PLEASE REPOST AND INVITE OTHERS.

I asked both ride organizers why they were moved to step up and put this ride on the calendar.

Jake Tong he’s simplky tired of the way he and his friends are treated when they use the bridge. “I have friends that won’t even ride with me if we have to cross the St. Johns Bridge,” he replied via email, “because the sidewalk is crazy narrow and in the lane, even in a group single file, cars fly by us like a bat-out-of-hell only a foot of room.”

“Cycling has given me such a better quality of life,” he continued, “and I’ll be damned if I let a car take that away from me.”

Hazel Gross said she wanted to lead this ride because, “We’re all aware of the huge problems with it. I think many of us held our breath waiting and wondering if when the victim was named, it would be one of our friends.” Gross added that she’s “personally terrified” of riding onthe bridge. “Those sidewalks really freak me out but taking the lane is just as scary.”

Gross was also one of the people who flagged concerns about the pinch-point on Northeast Lombard at 42nd before Martin Greenough died at that exact location. “Seeing your post that ODOT has been aware of this issue for so long but just won’t make changes because of freight interests is infuriating. I keep feeling like their response is a shoulder shrug when it comes to road safety,” she said.

Despite the fact that many auto users think otherwise, it is completely legal to ride in the lane on the deck of the St. Johns Bridge. Remember, biking on the bridge isn’t inherently unsafe — what makes it unsafe are the people who drive way too fast and without basic consideration for others.

Hopefully this ride will remind everyone that bicycle riders won’t be intimidated into the shadows by road users who feel they’re entitled to endanger others simply because their vehicle is larger and goes faster.

For you history buffs, you’ll recall this is the second St. Johns Bridge protest ride. In July 2006 a group of people rode over it naked to draw attention to ODOT’s negligent decision to prioritize motor vehicles over safety.

The post Protest ride will ‘Take the Lane’ on St. Johns Bridge this Thursday appeared first on BikePortland.org.