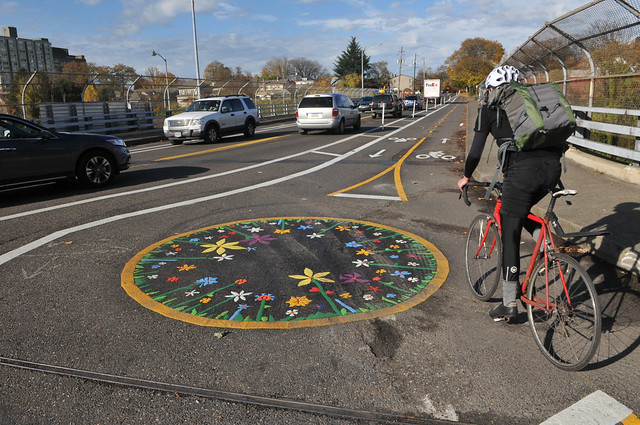 A circular bikeway interchange (or whatever you want to call it) is the centerpiece of several changes on the NE 21st bridge over Interstate 84.
(Photos: J. Maus/BikePortland)

Slowly but sure our city’s transportation bureau is creating more protected space for cycling. I took a closer look at the latest example of this on the Northeast 21st Avenue bridge over I-84 just east of the Lloyd District.

As we reported back in May, it’s one of the nine projects in the hopper citywide that feature physical separation between cycling and driving traffic.

PBOT has significantly changed the lane configuration on 21st between Multnomah and Pacific (at Sunshine Dairy) to include a paint-only buffered bike lane on the west side of the overpass and a two-way bikeway on the east side physically protected with flex-posts and rubber curbs. There are also bike-related additions to the north and south ends of the project in order to facilitate cycling connections to the Lloyd District (via the existing bikeway on Multnomah) and southeast neighborhoods (and eventually the 20s Bikeway).

The project is also the debut of Portland’s first-ever bicycle roundabout — a paint-only circular feature at the south end of the project that aims to improve safety at a four-way cycling junction.

To get the space needed for these additional non-motorized lanes, PBOT slightly narrowed the two standard vehicle lanes and removed a few auto parking spaces on each side of the bridge.

The changes in bike access now give southbound riders two options: A buffered bike lane if you are headed west after I-84, or a protected bike lane if you are headed east. For northbound riders, PBOT has painted a left-turn box in the northeast corner of the intersection at Multnomah and 21st in order to improve the westbound connection (toward Lloyd Center Mall destinations).

PBOT Bicycle Coordinator Roger Geller said during an interview last week that the changes make 21st Avenue, “The most bicycle-friendly overcrossing of the Banfield in inner Portland” (which he also admitted isn’t saying much).

Let’s take a closer look at the southern end of the project.

As you approach northbound from the southern end at Sunshine Dairy and NE Pacific Street, you see the start of the bi-directional, green-colored bikeway. The curbs, buffer space, and delineator posts are welcome here because of heavy truck traffic in the area. 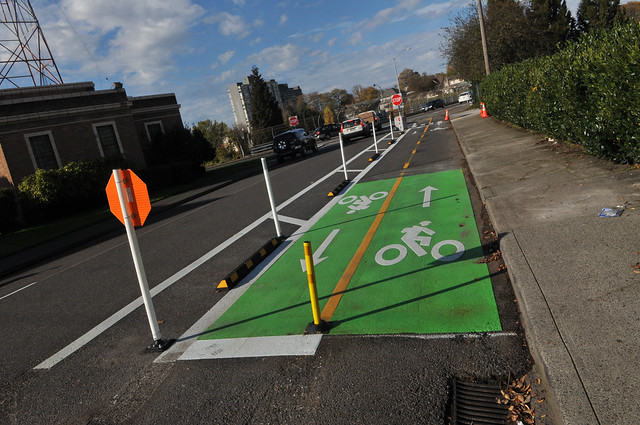 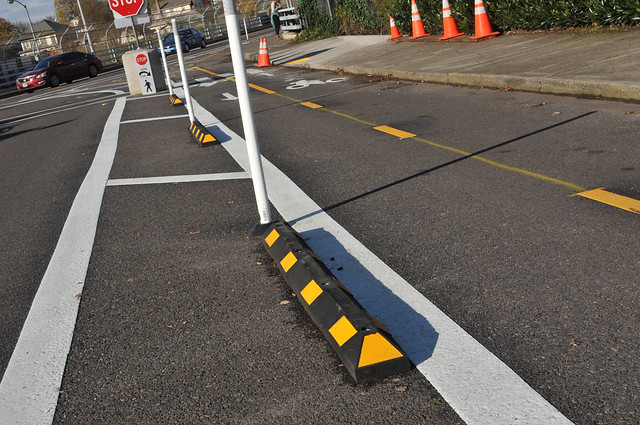 As you get to the overpass, there’s a new ADA crosswalk and stop signs for motor vehicle users… 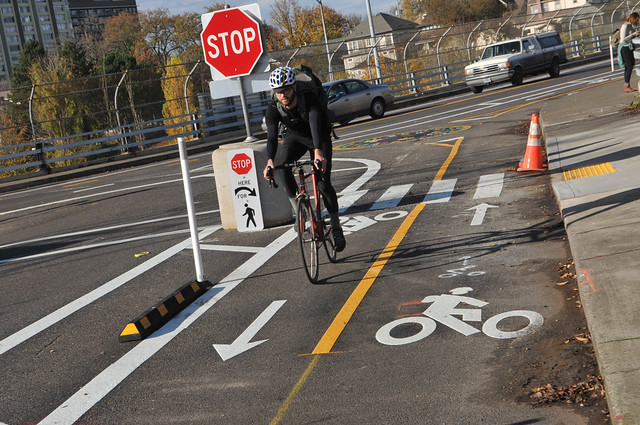 Here’s a view looking south from I-84 toward the southern terminus of the project at Pacific: 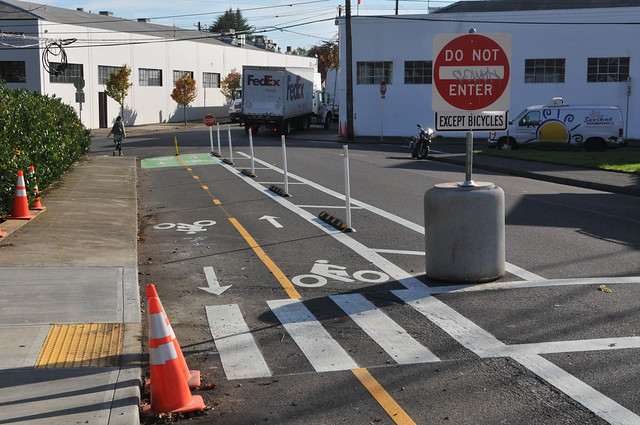 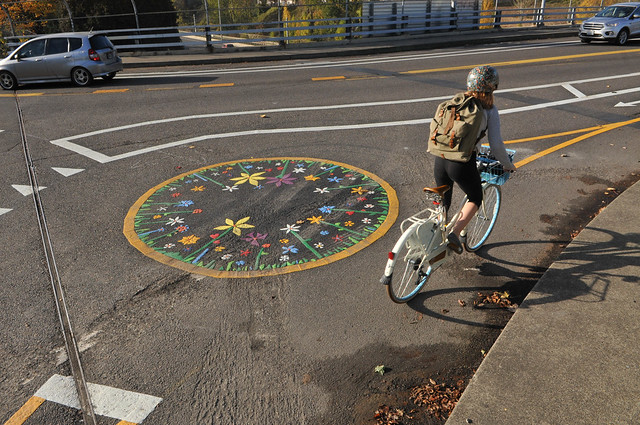 Here’s another view of the circle… 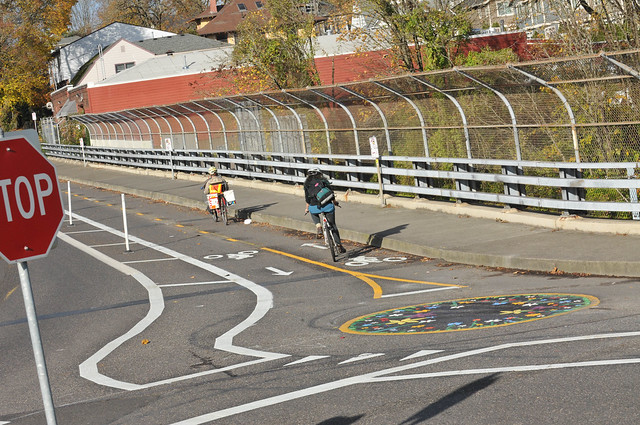 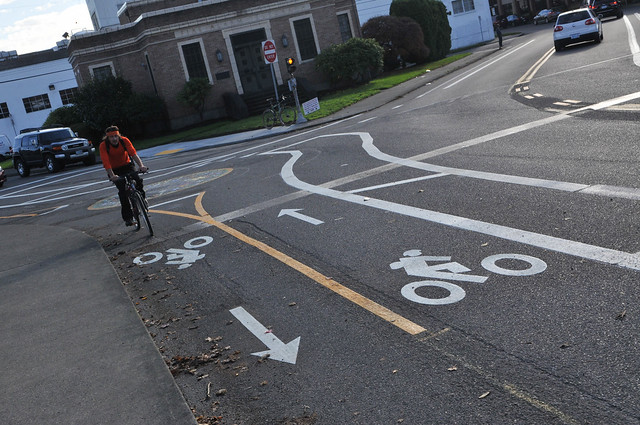 Our friend Jeff Johnson calls it a “community circle” and took this fun video of it yesterday:

As you can see, the angles of entry to and around the circle for auto users (from northbound 21st) and bicycle users (from northbound 20th and southbound 21st) are not gradual or even possible to use perfectly. When I asked PBOT engineer Andrew Sullivan about this last week, he said that’s sort of by design. “I understand people aren’t going to ride it the way it’s intended to ride,” he said. “It’s really there to raise awareness to look out for other cyclists.” In other words, the circle is a tool to encourage caution and communicate an expectation to road users that people might be coming into it from different directions.

Once on the overpass, the two-way bike lane feels good. Keep in mind that this isn’t a high-volume bicycle corridor yet. This means you’ll usually have plenty of room to ride. It’s also worth noting that all these changes create a much more balanced cross-section, which leads to people driving more slowly and increases the safety of everyone. 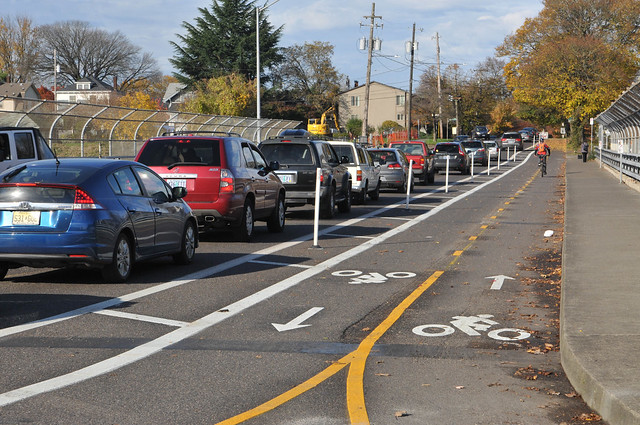 Notice the leaves building up as it approaches Multnomah. This is a problem PBOT needs to address. This many leaves degrades the quality of the facility… 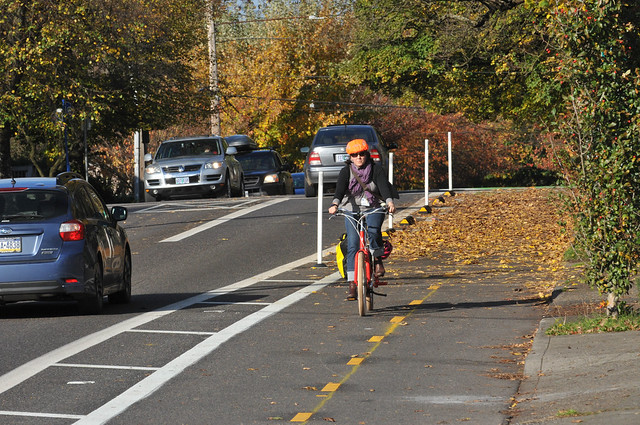 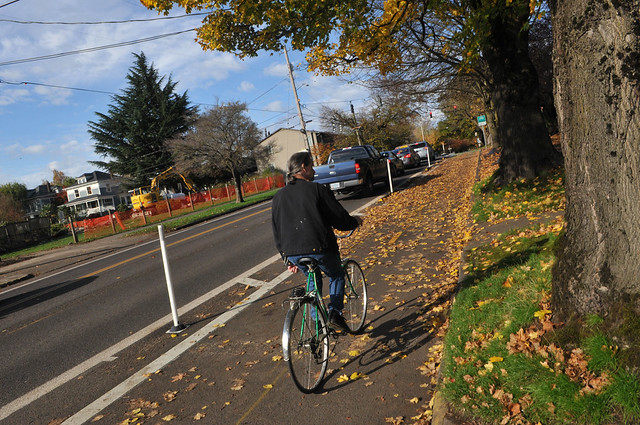 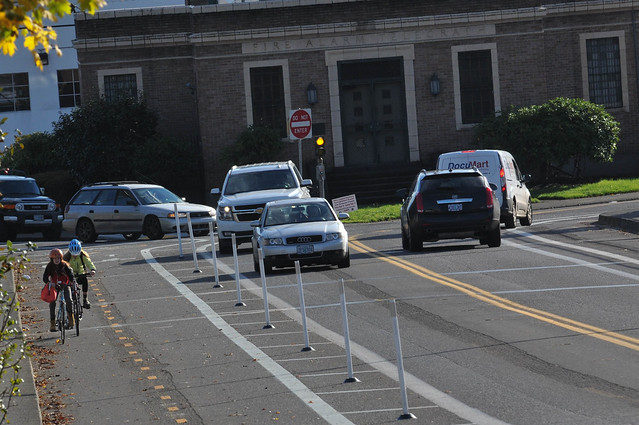 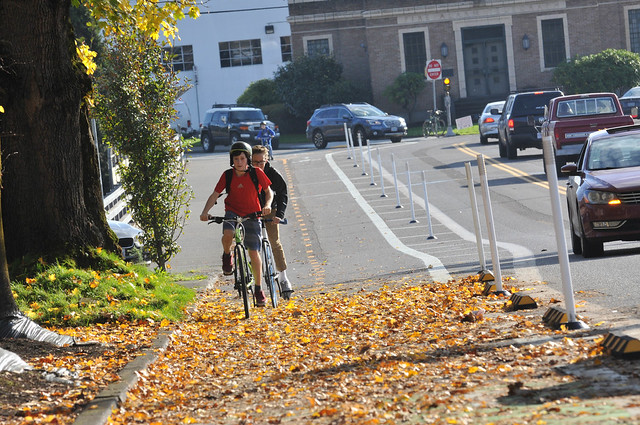 One very important aspect of this project is how it provides a much safer environment for young people who attend Da Vinci Arts Middle School which is just a few blocks southest of it. During both of my recent site visits I saw a lot of pre-teen kids biking by themselves (as in both photos above). It was so awesome to see them in a protected lane!

Notice how the kids in the image below are using the new, green-colored left-turn box in order to continue west on Multnomah… 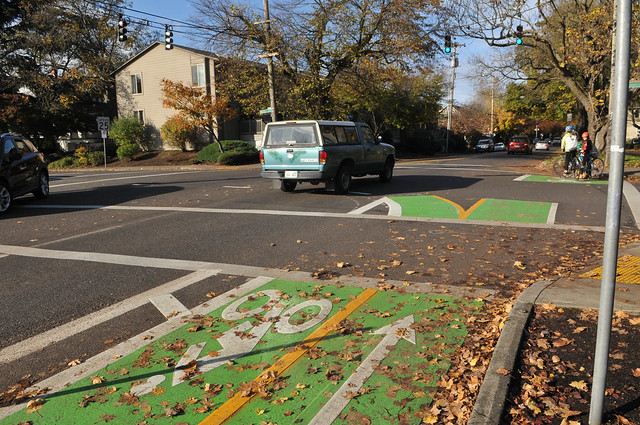 This project also comes with a new buffered lane on the west side of the overpass. This is the location where the PDX Transformation group installed unsanctioned cones due to the high rate of drivers who cut into the bike lane at the corner. Below is a shot of someone riding at the crux of that corner… 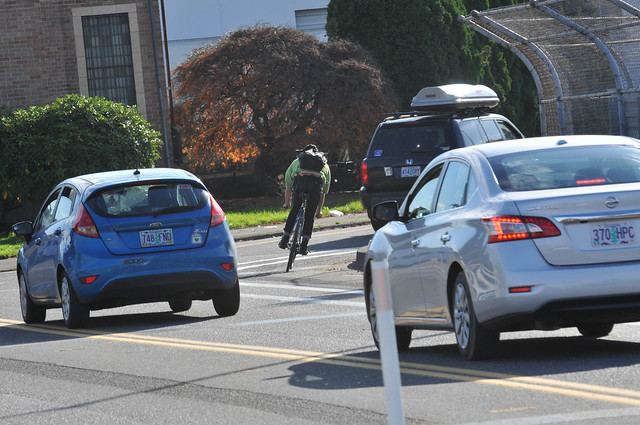 While these changes are great to see, we still don’t gave continuous connections to other protected facilities on either end.

Here’s what you get if you continue north of Multnomah… 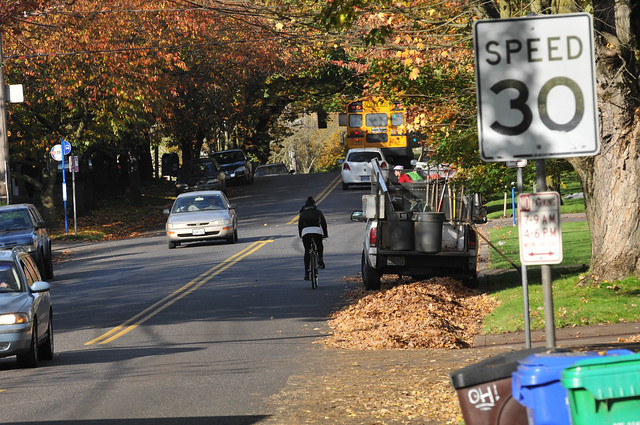 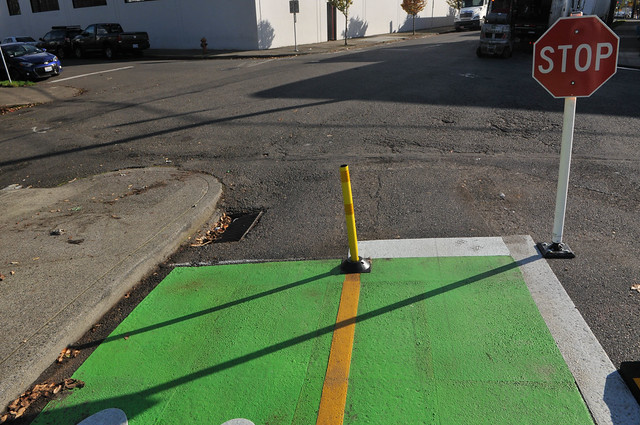 After watching this during peak-hour traffic twice now, I think it’s a big improvement. Yes it’s strange and will take some getting used to, but overall it provides more dedicated space for cycling, it reduces driving speeds, and it improves important connections on either end.

And yes, people are already illegally parking inside the bike lane. When I rolled up yesterday, a water delivery truck was parked across both lanes, leading to this classic display of frustration… 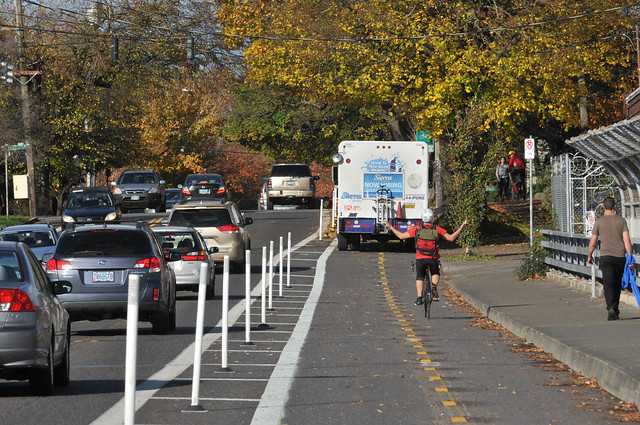 I suspect this type of behavior will go away once folks get used to the changes.

Speaking of which, it seems bicycle riders have mixed feelings so far.

A Jimmy Johns bike delivery guy who told me he rides this overpass 15 times a day said he likes the new protected bikeway because of how it allows him to connect more easily to neighborhoods east of 21st; but he doesn’t like the circle. He was worried about possible conflicts from bicycle riders not paying attention.

Yesterday a woman emailed us to express her disapproval. “The two-way thing is so awkward!,” she wrote.

Have you ridden through here yet? Tell us what you think.