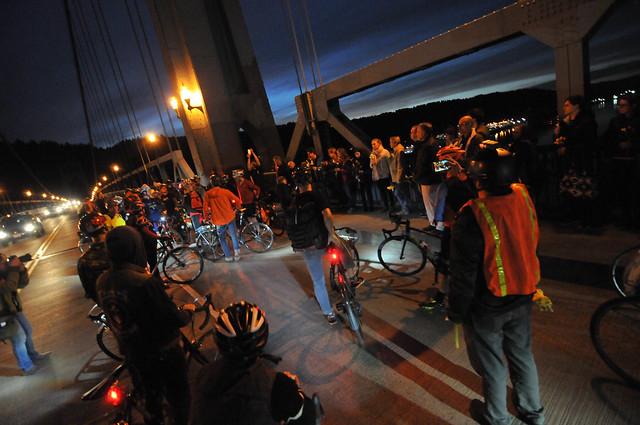 Hundreds of people came together in St. Johns tonight to remember Mitch York, the 55-year-old northeast Portland man who was killed while bicycling on the St. Johns Bridge six days ago.

York’s family and friends gathered with neighborhood families pushing strollers, and people who ride bicycles rolled in from all parts of the city. We gathered at Cathedral Park, under the historic bridge that we all simultaneously love for its beauty and despise for its lack of safe bike access.

People who knew and loved Mitch York passed out flowers and mingled among the crowd as the TV news cameras assembled and Portland Police officers mapped out their plans to escort the ride. 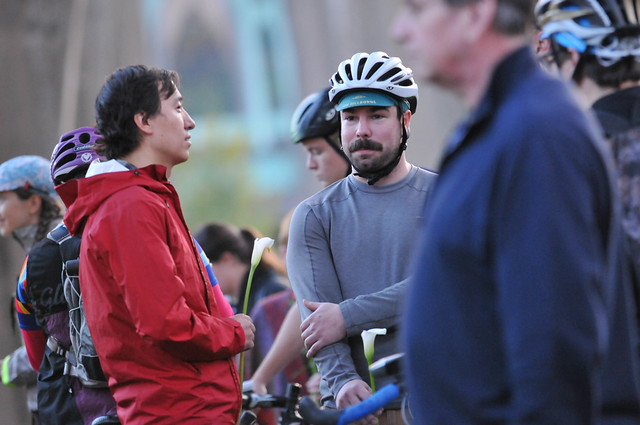 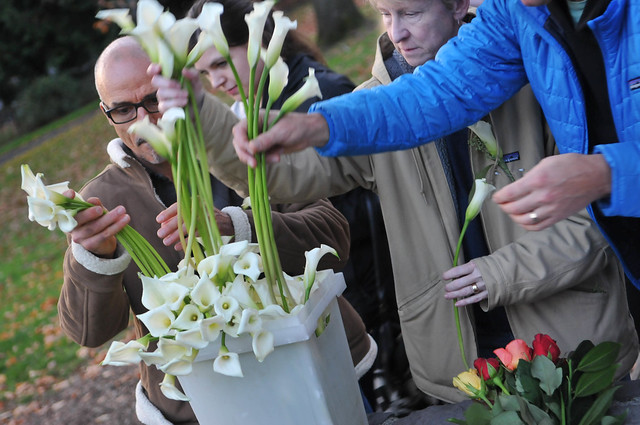 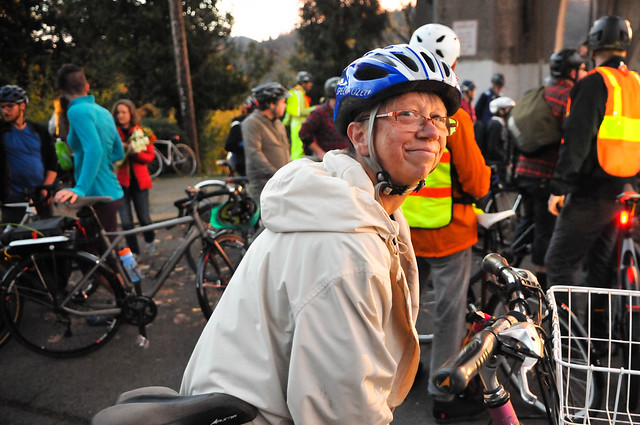 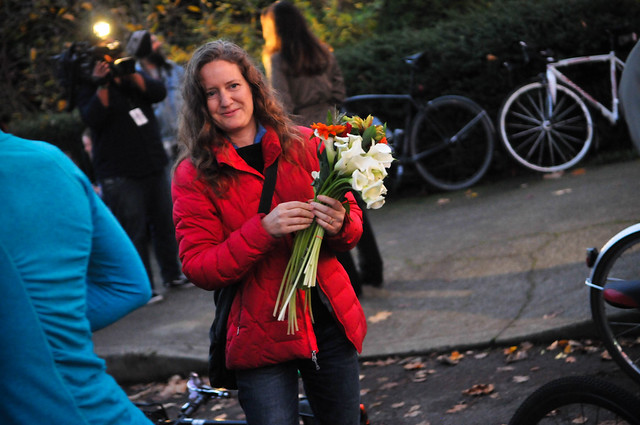 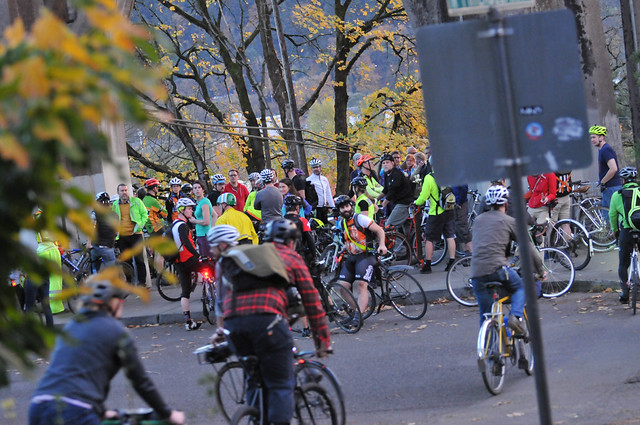 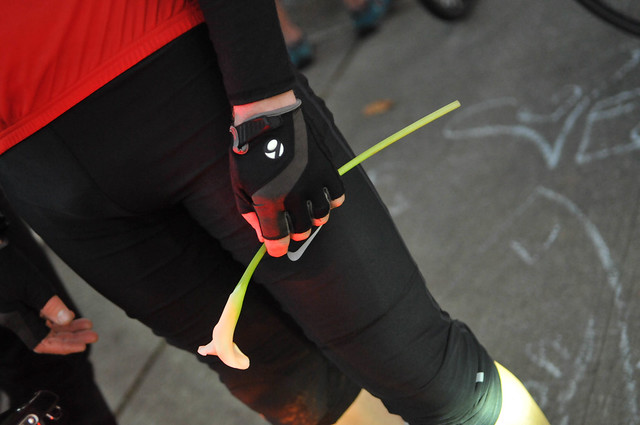 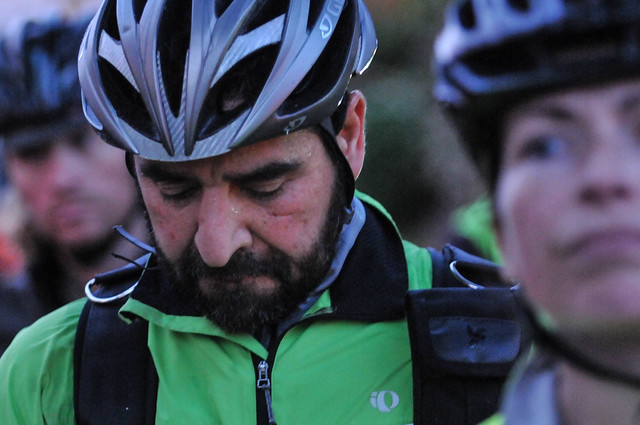 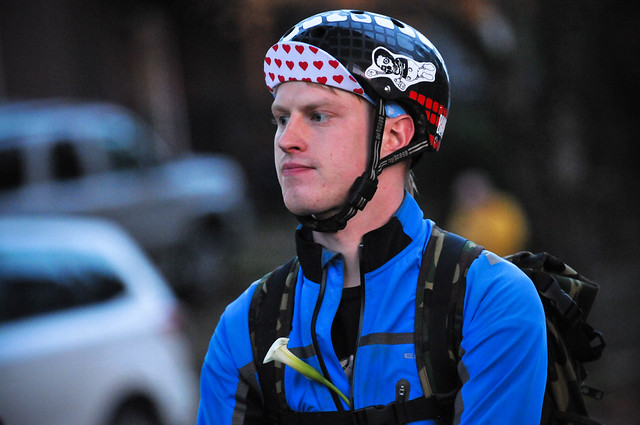 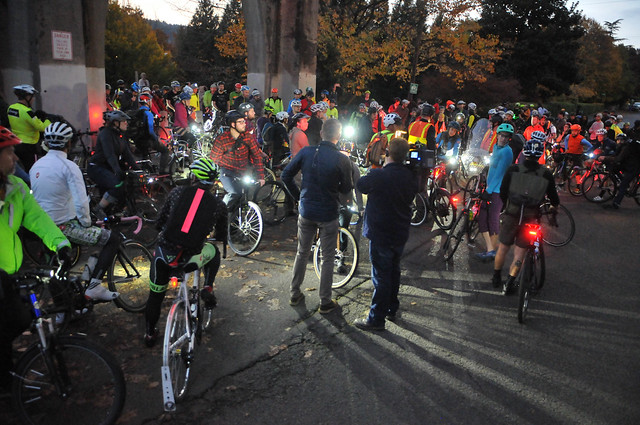 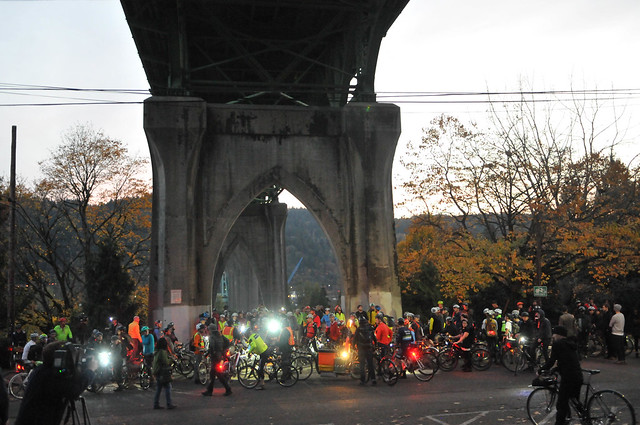 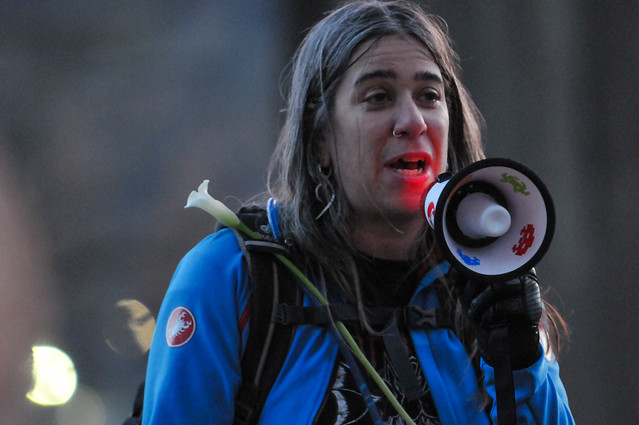 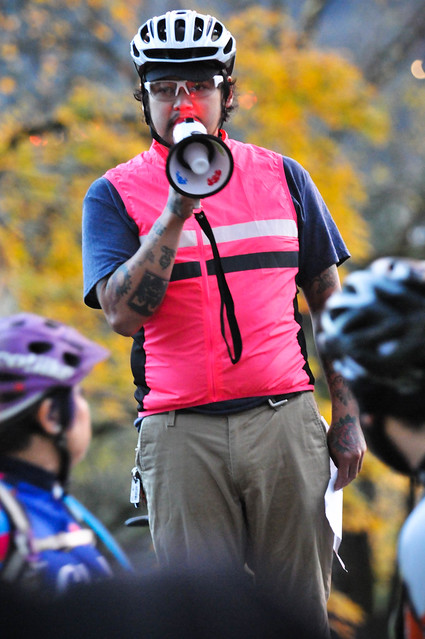 After a slow ride through the streets of downtown St. Johns we pedaled up onto the lanes of the bridge. The Portland Police (whose Traffic Division headquarters happen to be located right at the east end of the bridge) fully supported this ride. So much so that they deftly prevented all driving on the entire north side of the bridge while we pedaled to the middle of the span. 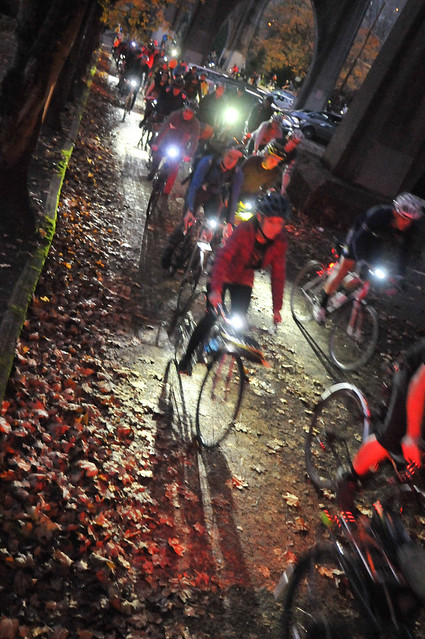 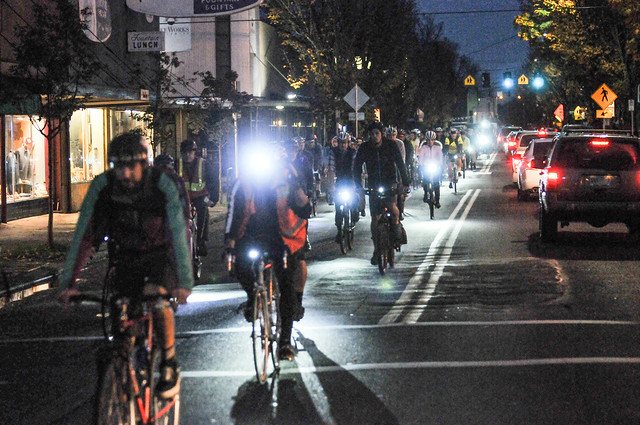 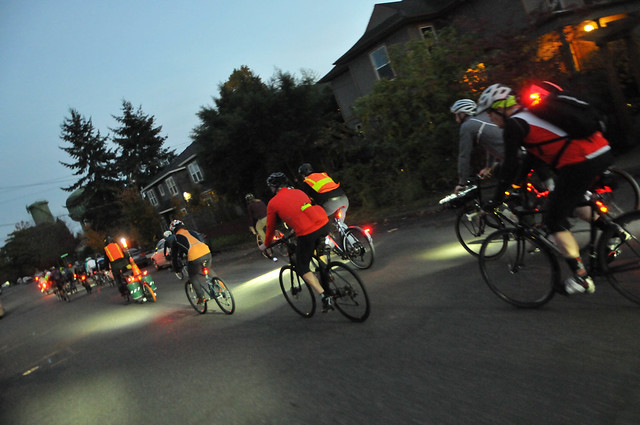 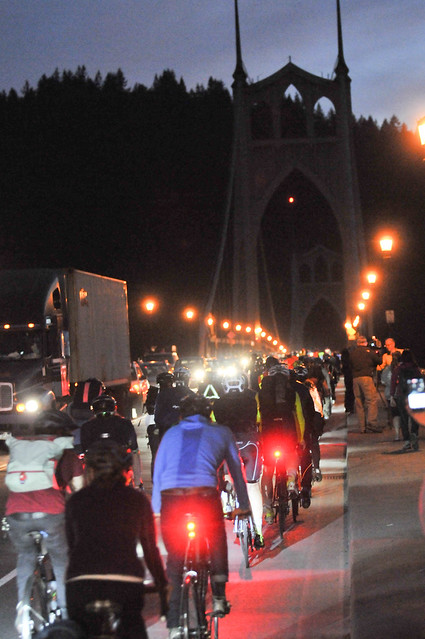 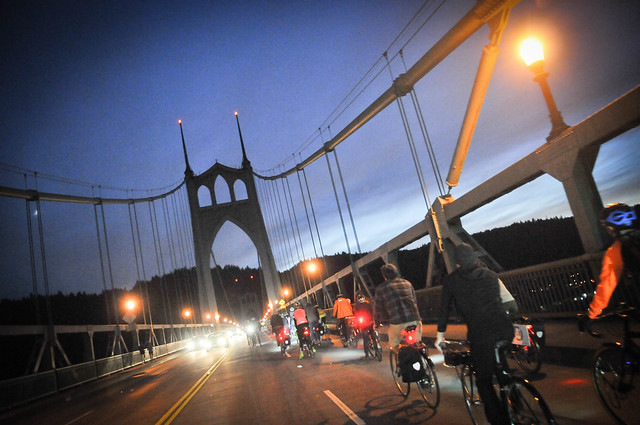 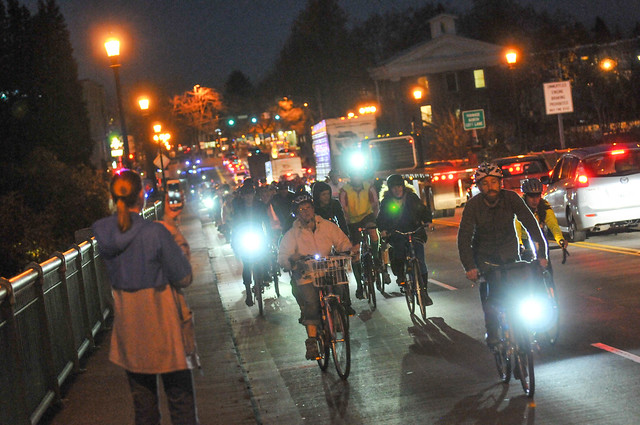 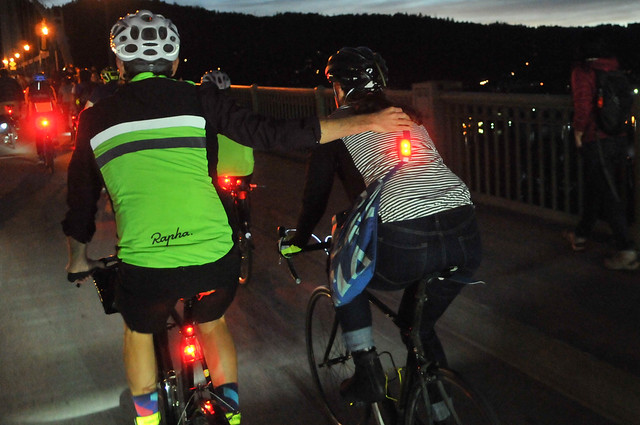 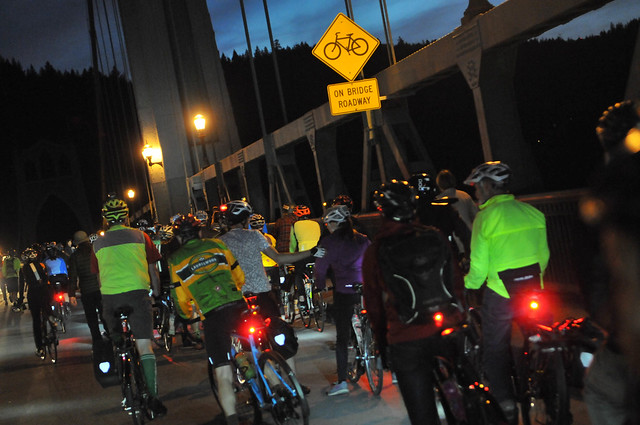 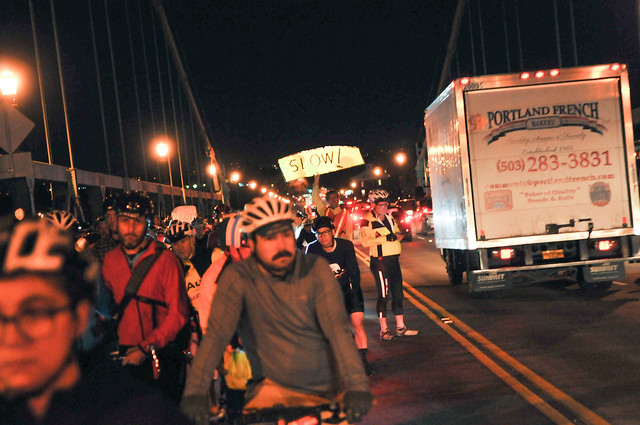 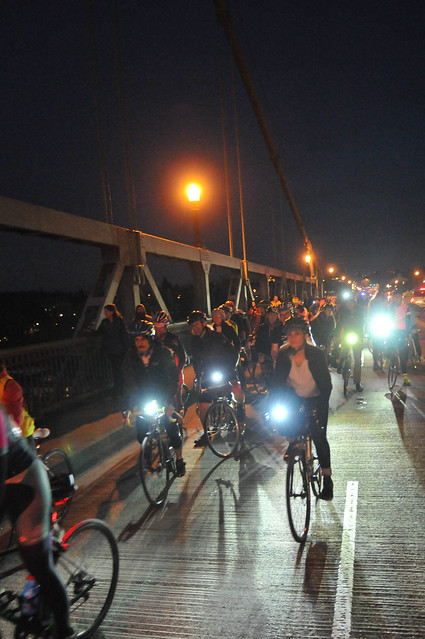 As we’ve seen with other recent road tragedies, this isn’t just about “cyclists.” People who live in St. Johns are also sick and tired of dealing with dangerous roads and the people who use them irresponsibly. One woman was passing out flyers for an upcoming Transportation and Traffic Safety Forum that will be held at the Community Center on November 14th (we’ll have full details about that in a separate post).

Once we made it to the middle of the bridge, with York’s family and friends assembled on the sidewalk, we all shared several minutes of silence. There we were, standing in a place we all usually ride quickly across, too scared and stressed to even look down at the river, much less contemplate anything deeply. As we swayed high above the Willamette under clear skies, people driving cars and trucks eastbound rumbled by very slowly, probably shocked to see that many people stopped on the bridge. (If only they’d drive like that more often, is all I could think about.) 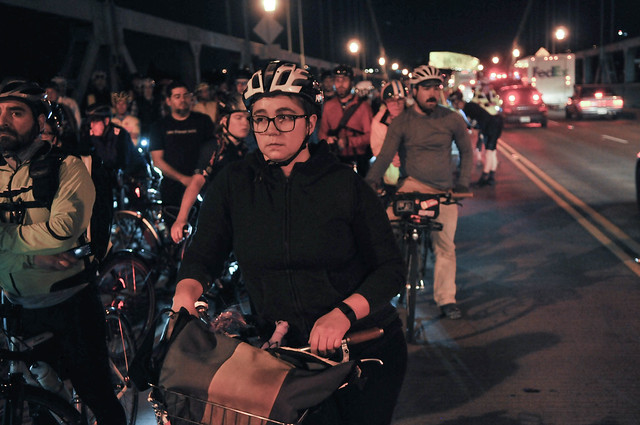 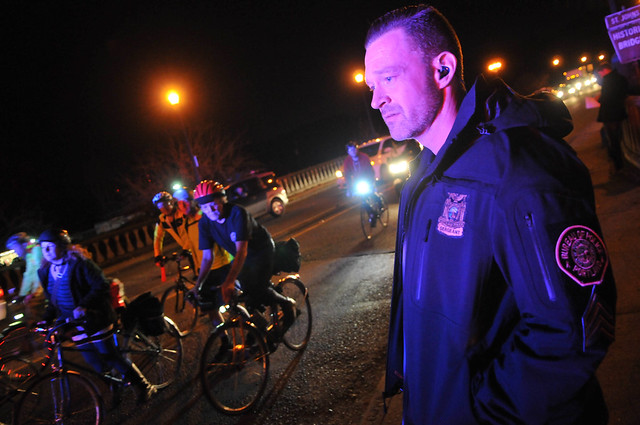 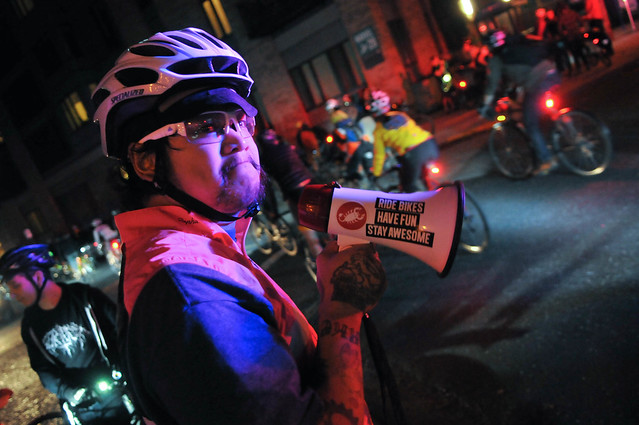 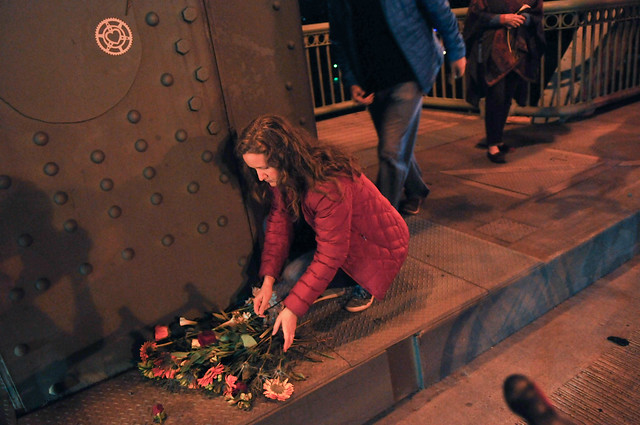 The weight of the tragedy, the seriousness of the safety issues we face, and the immense outpouring of support and unity displayed by our community, brought several people to tears.

It was a very powerful moment.

After everyone layed flowers at a makeshift memorial near one of the bridge stanchions, we turned around and rode back toward St. Johns.

The post At protest ride, St. Johns Bridge carries weight of hundreds, and of recent tragedy appeared first on BikePortland.org.