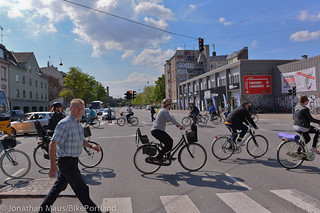 I know all you can think about is the election. But you should probably take a break and get caught up on the best bike-related stories we came across last week…

Hales sees the light: Remember that no good, horrible, very bad decision Mayor Charlie Hales made in 2013 to enact parking minimums on new residential development? Now he wants to remove them.

Seattleites are over I-5: This article about removing I-5 through Seattle could be — should be! — written about Portland. That freeway sucks and has no business bisecting our central city.

More freeway removal: The city of Rochester in upstate New York filled in a central city freeway with dirt, “to focus on pedestrians and establish vital neighborhoods for housing, expanding businesses and producing jobs.”

As goes Los Angeles, so goes…: A ballot measure in Los Angeles would raise big money ($42 Billion) for light rail. The LA Times has a great rundown on that and a general overview of the non-driving transportation mix in the driving capital of America.

SoCal transit haters: To give you an idea of what L.A.’s transportation reformers are up against, check out these bus-hating Venice residents fought against a new bus route through their neighborhood and then celebrating victory with a tasteless piñata.

“Safe mobility” not “Vision Zero”: The California city of Santa Ana is not just boldly breaking from their County’s auto-centric policies, their new plan to eliminate traffic collisions is called “Safe Mobility” instead of the more popular and well-known “Vision Zero”.

Biking on main street: It’s simple: Backstreet and “neighborhood greenways” aren’t enough. If we want to be a real cycling city, we must make it safe and easy to bike on main commercial streets. But don’t take my word for it, check out the analysis by Michael Andersen.

The cost of car abuse: A new report has found that a whopping half of all injuries treated at a major hospital in San Francisco were from traffic collisions — and the cost to treat them was $105.5 million over two years.

An eye for an eye: China’s traffic enforcement is not messing around when it comes to cracking down on people whose bright lights blind other road users.

Cool bikes in Detroit: The Guardian has a fun photo essay of the creatively customized bikes that roll on the streets of Detroit.

Put that money into bike lanes: A study published in the journal Injury Prevention found that New York City’s bike lane investments have led to “exceptionally good value because they simultaneously address multiple public health problems.” The study went so far as to say that spending money on bike lanes to improve health is, “more cost-effective than the majority of preventive approaches used today.” Bloomberg News also covered the study.

Copenhagen tipping poing: This line from Copenhagenize says it all: “For the first time since the City starting counting traffic entering the city centre, there are more bikes than cars.”

Is it really that complicated?: Not sure to smile or cry at the news that the state DOT in Colorado is having such a hard time preventing vulnerable users from being hit and killed on their roads they’re willing to pay the public for new ideas.

Drop us a line if you come across a great article and want us to consider sharing it in next week’s roundup.