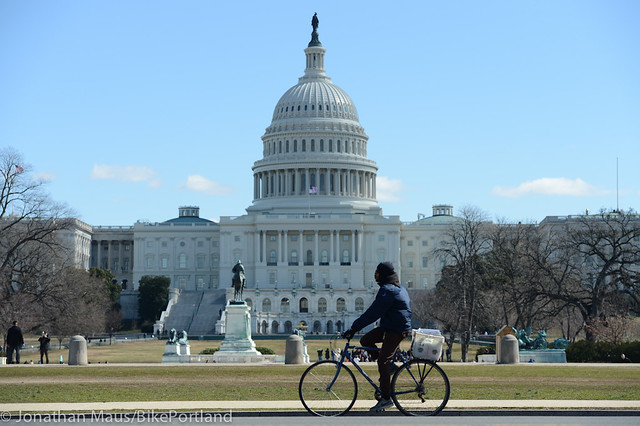 You might want to consider showing up this year.
(Photo: J. Maus/BikePortland)

As the reality settles in that we are just two months away all three branches of our federal government being controlled by Republicans, people who advocate for cycling need to take stock.

Yes I know, cycling isn’t always a purely partisan issue, but let’s not be naïve: The fact is a large majority of powerful, high-profile Republicans tend to strongly support transportation policies that favor the use of motorized vehicles.

Put another way, interest groups that don’t make cycling accessible infrastructure a priority see a friendly ear in President-elect Donald Trump. And early signs make it clear that automobile-centric interests are lining up to take advantage their new friend in the White House. To counter what could be a transformative era (to put it mildly) in national transportation politics, people who care about bicycling need to line up against — or figure out a way to align with — these forces.

One place to do that is at the annual National Bike Summit hosted in Washington D.C. by the League of American Bicyclists.

I eagerly attended the Summit every year between 2006 and 2014 (except the year my son was born). In the last two years I felt like the Summit had lost its mojo (or maybe it was just me) and I didn’t feel a compelling reason to be there. Now I’m thinking it’s time to go back. Beyond the obvious implications of Tuesday’s election, there are forboding signs that bicycling advocates must acknowledge and prepare for.

News outlets reported yesterday that the auto industry has already started efforts to roll back fuel economy mandates installed by the Obama administration. But just like Trump presents a much different set of operating instructions than fellow Republican George Bush, it’s very likely his transportation secretary will too.

A story in the New York Times this morning says the adviser Trump has tapped to help him pick transportation and infrastructure staff is the chairman of a D.C. law firm who counts the National Asphalt Pavement Association as a client.

In a blog post Wednesday, NAPA said they’ve already starting working with the Trump transition team on issue “including funding for highways” and “Critical Commerce Corridors.”

Trump says he wants to pass infrastructure legislation in his first 100 days — which puts the National Bike Summit on March 6th through 9th right at the tail-end of that push. NAPA plans to join the Transportation Construction Coalition in D.C. for a “Legislative Fly-in” event on May 17th. “The fly-in will occur,” they say on their website, “at a critical time and your help will be needed to pass the Trump plan in Congress.”

See you at the Summit.

The post Stakes have never been higher for upcoming National Bike Summit appeared first on BikePortland.org.