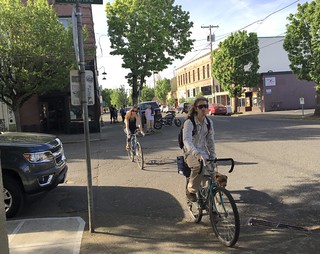 The death of an innocent man on the St. Johns Bridge last weekend has spurred — and renewed — activism around transportation reform on many fronts.

Tired of freight trucks and reckless driving holding their streets hostage, on Monday the St. Johns Neighborhood Association will host a forum to delve deeper into the issues of traffic and transportation safety. Oregon House Speaker Tina Kotek and representatives from the Portland Bureau of Transportation and the Oregon Department of Transportation are slated to attend. Local residents passed out flyers for the event at last week’s protest ride; but SJNA Board Member and Chair of their Safety and Livability Team Travis Parker tells us the event was planned prior to the collision that killed Mitch York.

Parker and other volunteers with the neighborhood association have spent over a year on a coordinated effort to make streets in St. Johns safer. In October 2015 anonymous residents erected fake speed limit signs in a desperate effort to get PBOT’s attention and get people to slow down on a wide section of North Smith Street.

The neighborhood — on a peninsula formed by the Columbia and Willamette rivers about 10 miles north of downtown Portland — has grown and changed considerably in recent years as housing prices have skyrocketed in close-in neighborhoods. In addition to more people living in the neighborhood there’s been a significant increase in freight truck traffic as the nearby industrial port distict has hemorrhaged shipping container business. St. Johns is ground zero for freight traffic because it sits between two major industrial areas (Rivergate and northwest Portland/Linnton) and is bisected by Highway 30 — a designated freight and National Highway System route that’s managed by the Oregon Department of Transportation. The St. Johns Bridge is part of Highway 30 so it’s not surprising that neighborhood activists like Parker feel like their work is now more important than ever. Adding to the sense of urgency in St. Johns is a feeling that the emergence of projects that improve cycling, coupled with major demographic changes (related more to income, not race like we’ve seen in areas like the Vancouver-Williams corridor) could lead to a backlash against street projects with some people seeing them as nothing more than signs of gentrification.

For Parker and others organizing for safer streets, it’s all about preventing more deaths and injuries.

“In recent months we have had tragedies on two truck routes that place freight accommodation above all other users – especially vulnerable road users,” Parker wrote in a statement last week. “The St. Johns Bridge, where Mitch York was killed by a reckless driver October 29th, and Columbia Blvd, where high school student Bradley Trujillo was struck crossing before school, have freight designs that inherently do not dissuade reckless driving and seemingly restricts opportunities for improved safety and access for vulnerable road users: pedestrians, cyclists, and ADA compliance.”

In addition to a focus on the bridge, Parker says he’s working with people from St. Johns and other adjacent neighborhoods who want to tackle various projects including: the creation of “better streets teams” and improving bicycle access and safety on North Willamette Boulevard.

At Monday night’s forum the goal will be to educate everyone on the latest projects and issues in St. Johns, listed to people’s concerns and perspectives, and map out a plan to realize shared goals. For more details, visit the event listing on our calendar or view the flyer on the St. Johns Neighborhood Facebook page.