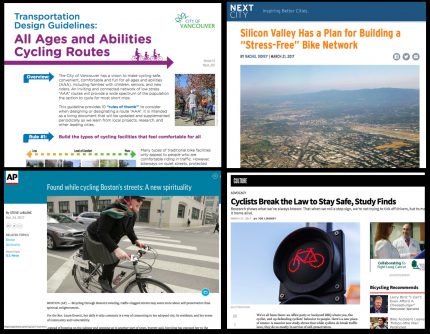 This week’s Monday Roundup is sponsored by The eBike Store, Portland’s exclusive dealer of the BuddyRider dog carrier.

Here are the most noteworthy stories we came across last week…

The NYPD strikes again: Seems like every time I check my news feed there’s another example of how police in New York City just don’t get it. This time they’ve confiscated hundreds of “illegal” e-bikes used by the city’s droves of food delivery workers. WTH?

Holier-than-thou: A religious leader in Boston has found what many biking veterans have — a deeper spirituality and stronger connection to place — since she started biking to church. She’s even written a book about it.

Portland loves auto parking: The DJC has a good roundup of all the auto parking projects the City of Portland and Portland Development Commission are poised to spend millions on this year.

Bike share revolution in China: Beijing, once a bicycle capital of the world, was overrun with cars in recent decades. Now bikes are coming back thanks to high-tech bike share systems.

Ofo leading the charge: Ever hear of Ofo? It’s a Chinese bike-sharing company that’s valued at over a billion dollars and just got a visit from Apple CEO Tim Cook.

Studying scofflaws: A major study found that people generally break traffic laws while cycling just to stay alive — not to be jerks.

Trump’s budget and bikes: The League of American Bicyclists breaks it down. It’s not all bad, but it’s pretty bad. Let’s hope this thing goes the way of his health care plan.

Silicon Valley’s bike vision: Some heavy-hitters in the tech world are behind a new vision for better bicycling in the Silicon Valley.

It’ll take more than a vision: A report by the Silicon Valley Bicycle Coalition found that people won’t try cycling because they feel auto users drive too dangerously.

World-class fast: USA Cycling (America’s governing body of racing) wants to be the best in the world — with a focus on their women’s teams and BMX.

Not that AAA: Vancouver, Canada has just released an inspiring new set of bicycle facility design guidelines that put the focus squarely on “All ages and abilities” or AAA.

Bikeway debate in NZ: Small market owners in New Zealand blame a bikeway for the demise of their business because it took away auto parking.

They’re loud too: Cars: They pollute our air, they are used as weapons by terrorists, they turn people into assholes, they kill 40,000+ people every year, they take up way too much space in our cities and towns — and they also make too much damn noise.