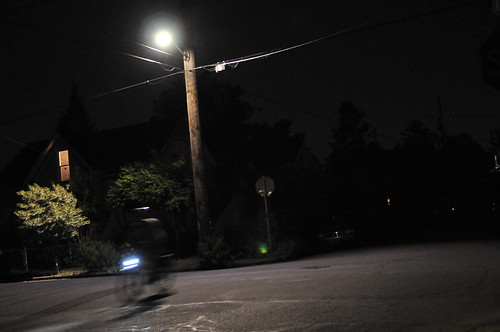 Have you noticed the bright, white LED streetlights popping up around the city?
(Photos © J. Maus/BikePorltand)

— Publisher’s note: Welcome to a first for BikePortland: We are working in an official capacity with the City of Portland Bureau of Transportation and DKS Associates (a transportation planning firm) to help gather feedback on their LED streetlight conversion and guidelines update project. That means city and DKS staff will monitor the comments left on this post, on Twitter, and on Facebook to learn as much as they can about your perspective on streetlights. Thanks for helping us make biking better! — Jonathan

The City of Portland is working on their largest energy-efficiency project ever and you might be surprised at how much bicycling figures into it. The Bureau of Transportation is about half-way toward replacing 45,000 older, “high-intensity discharge” streetlights with energy efficient, light-emitting diode models (about 80 percent of all streetlights in Portland). The new LED lights require less maintenance, use half the energy, and are likely to last about 20 years — that’s four times longer than the old bulbs. If you’re keeping track, when completed, the new streetlights will keep 10,500 tons of climate-changing carbon pollution out of the atmosphere. Not only that, but the $1.5 million in energy savings per year will allow them to fund other transportation projects.

In addition to this big conversion project, the City is updating their streetlight guidelines. The current guidelines were adopted in the 1980s, when bicycling didn’t have nearly as much of a presence on our roads as it does now. This time around, the City wants to insure the needs of all road users — including bicycle riders — are considered in the guidelines update.

That’s where you come in.

PBOT wants to make sure that as this project continues and the guidelines are updated, they meet the needs of walkers and bicycle riders. And they want to get it right the first time. They need to know where to focus their efforts, which light levels are setting most desirable for people using bicycles, and any other important considerations from the bicycling public.

Take neighborhood greenways for instance. This is a tricky application for PBOT because people who live on residential streets often complain about higher light levels. But in the past few years a number of streets have been converted into places where PBOT encourages bicycle use and wants to make cycling as safe and inviting as possible.

What is the best approach to balance these two perspectives? (We want to hear from riders and residents.) There’s a lot at stake here. As you can see from the real-time map of their progress, some major streets in the bicycle network remain to be converted. Most of the inner northeast neighborhoods, including the city’s busiest bike street of North Williams, aren’t slated for conversion until fall.

Your input can help PBOT implement the most bike-friendly LED streetlight conversion approach in the nation.

To help inform your feedback, the best thing to do is see the old and new lights in person or in the images below. It’s easy to tell the new LEDs from the old ones they’ve replaced. The new lights look crisp and white “like moonlight” (says PBOT) while the old ones put out a dull orange hue. 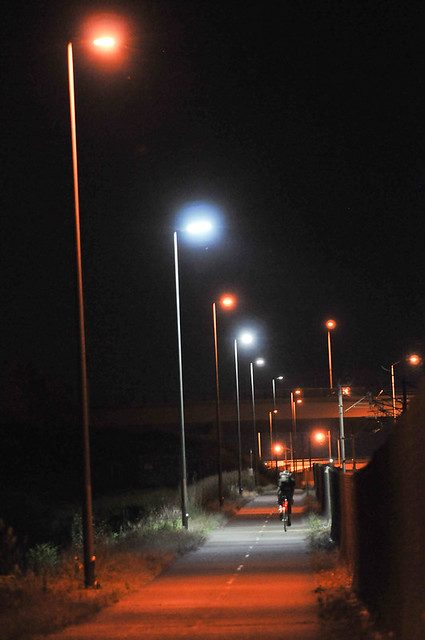 I-205 path near NE Halsey (adjacent to Gateway Green). 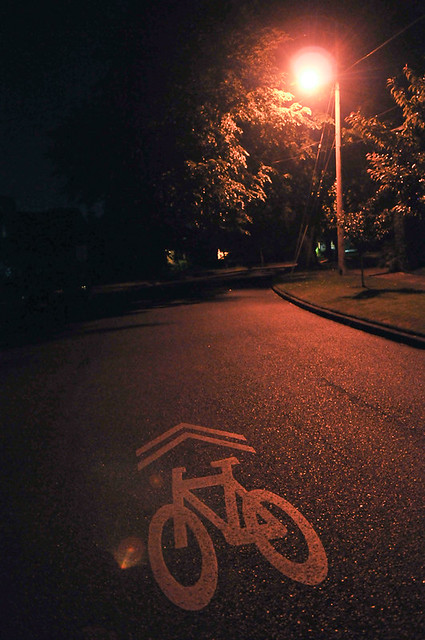 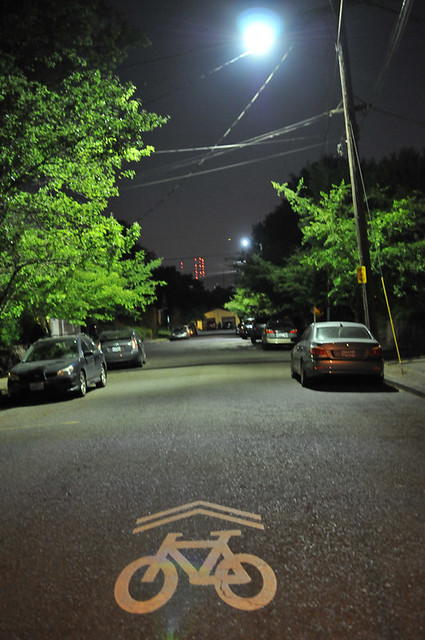 Hopefully you’ve noticed these in your daily ridings. Once you have, we need to hear your feedback. To help focus your thoughts, here are some general questions:

— What do you think of current settings where new LEDs have been installed? Are PBOT’s assumptions for lights on popular biking streets on target? Or, are they too bright? Not bright enough? What about where bike routes cross other streets?

— Are there places on your daily commute that should be brighter?

— In general, what parts of the city that don’t yet have the new lights, most urgently need them?

— Given that PBOT expects bike use to rise in the future, what key bikeways should be given special attention when it comes to lighting?

— Do you think neighborhood greenways should be brighter or darker (keeping in mind what it feels like to live on one)?

We’re happy that PBOT has come directly to the community through BikePortland to make this a better project. Your feedback is appreciated and you can rest assured it will impact this important project.

Feel free to leave a comment below, tweet us at @BikePortland (use #PDXLED if you’re into that sort of thing) or contact PBOT directly at streetlighting@portlandoregon.gov or (503) 865-LAMP (5267). Thank you for your help!